[Editor's note: Earlier this fall, The Tyee Solutions Society put out a call for submissions asking residents to share stories of the renter life. The results exceeded expectations -- when people wrote about home, they opened their hearts. The result is this occasional series of stories about life, from British Columbians who are living it as renters.]

After high school I lived in my parents' four-bedroom subsidized rental unit for another year. And that was pushing it, because they needed the space for three more kids still at home. My younger brothers, 13 and 17, were especially antsy, because after I was gone one of them would get to take over my bedroom. It would be the first time each of them would get a room to themselves. But I made them hold out a little longer, because I was saving up wages from my job at Mark's Work Wearhouse in order to move to Vancouver Island with my girlfriend, Jen, get a college education and live happily ever after. 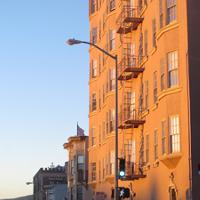 Jen and I made trips to IKEA, draining part of our savings for glasswares and easy-to-assemble tables, and her parents donated their old white leather sofa. Just after Christmas we loaded our dreams into a U-Haul truck, drove onto the ferry and took possession of our apartment in Victoria, just a short walk from the beautiful Old Town. I remember my mom cried at my departure as if I was all grown up.

On the first night in our new place, New Year's Eve, Jen and I poured blush wine into rainbow-stemmed IKEA champagne glasses and raised a toast to adulthood.

There was a painting I grew up with that my parents had let me keep: a landscape of mountains viewed from inside a dilapidated old barn. The wood gate was ajar and I liked to stare at the mountains and imagine horses wandering free, with the shelter of the barn available if ever the horses had need of it.

Everybody said the painting was ugly, including Jen. Against objections I hung it in our living room. I liked to look at the thing -- it felt familiar and safe.

I don't recall if I attended any classes at Camosun College. But I told government student loan agencies I did, and they gave me money. But it wasn't enough, and our savings wouldn't last six weeks.

Despite the resumes we dropped at every storefront and cafe, Jen and I couldn't land job interviews anywhere. We argued. Homesick, she drove her car back to Maple Ridge to renew her feeling of support from her parents.

If I won money, I'd go to church

Alone in that apartment, I felt loathsome -- as sick as I had been knowing my little brother was picked on at school. After midnight I went for a walk, found a corner store and spent my last $50 on Scratch & Win lottery tickets.

It was stupid. I knew it, but I swore if I did win money I'd go to church or something. I won a few dollars, much less than $50, and went to a different store to buy more Scratch & Wins so the clerk wouldn't think I was pathetic... until I had nothing left. I never did end up going to church. 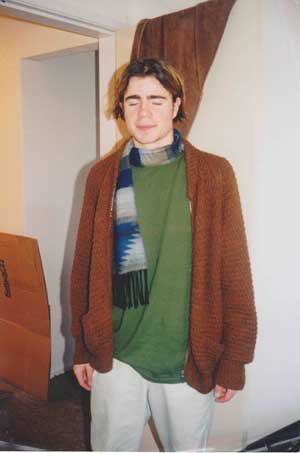 Jen and I moved out of the apartment with only a few days notice, so we had to surrender our deposit. We used the remainder of Jen's savings to transport our stuff back to the Lower Mainland and put it in storage at her parents' house.

I had an awkward exchange with my mother, who said there wasn't any room for me at home. But I pushed and persuaded her to let me stay a few weeks, until I raised a few dollars at my old job to pay half the rent for a basement suite in Port Coquitlam.

Jen and I made another go of it in that basement suite. At least we paid our bills, but I for one was still terrified. We argued again, and by summer went our separate ways, she with a roommate and I into a party house with friends.

I found new problems in that house, but at that stage of growing-up I craved comfort, and the dissociation of drugs seemed better than the paralysis I felt trying to strike out on my own, sober.

Self-medicated, I got a job in Vancouver and took classes at Douglas College. I rented a shared basement suite and hung my ridiculous painting and lived there for 14 months -- the longest I'd live anywhere for years to come.

Eventually my roommate and I couldn't pull together rent, so we loaded our stuff into shopping carts and rolled away through East Van alleys to our next rooms.

There was no space in the cart for the painting, and by that point I'd come to hate it anyway, the same as everyone else.

I remember the bitter satisfaction I felt to lean the thing against a wall, kick a hole through the mountains and break the frame to pieces.