[Editor’s note: Earlier this fall, Tyee Solutions Society put out a call for submissions asking residents to share stories of the renter life. The results exceeded expectations -- when people wrote about their home, they opened their hearts. The result is this occasional series of stories about life, from British Columbians who are living it as renters. ]

A tenancy agreement requires signatures from the owner and the renter. The building structure (steel, glass, concrete) is not consulted in the agreement, but it has ways of expressing an opinion. 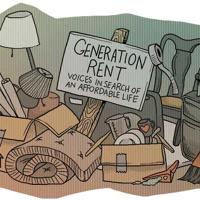 To Home Ownership and Back Again

The first apartment I rented all by myself was a glamorous funhouse of decay. I suppose I knew it right away: the sinister gleam of the full-length mirrors on more walls than not, the sour-earthy smell of exhausted copper piping. But I was short on options and anyway, who wouldn't want to live downtown, especially in a city like Vancouver?

Growing up in a notorious suburb, I could not deny the appeal of a proud life under the glow of Google Map's orange pin. I could lose myself in the madding crowd. I could conjure authentic emotion singing Petula Clark's "Downtown" at karaoke.

Or so I imagined.

Just listen to the music of the traffic in the city

The "acting" landlord, only a couple years older than me, was filling in for his mother who lived overseas. He said she was the first to inhabit the apartment almost three decades ago, when the building was new. I could see his mother's trace in the pale blues and mauves of the walls. After she moved away, her only son had moved in. "I displayed my tea set on a table against that wall," he said, gesturing to the nook where a looming panel of floor-to-ceiling mirror showcased our awkward reflections.

I imagined the original plan for this mirror. Installed in 1982 alongside an impressive array of extraneous lighting options, I suspected it was for purposes far more salacious than the contemplative consumption of daytime beverages.

The rent was half a month's pay and he wanted to share the apartment's mailbox. Things will be great when you're down-town, sang Petula.

Shortly after I moved in, the building launched its campaign to reject me. At first its efforts were localized. The hot water didn't work in the shower. The caulking of the bathroom faucet flayed off and transformed the counter into an infinity pool. I washed my hair contorted over the kitchen sink.

A week passed and a monstrous tank burst on the roof, flooding over half the high-rise. On a low floor, and relatively dry, I chose to ignore it. The building was just going through a hard time, I thought. I danced to new wave in the funhouse mirrors, hoping to win its favour.

Sharing a mailbox was another matter. The apartment received the mail of no fewer than six of the landlord's family members, all crammed in a cube too small to hold running shoes. As he only retrieved the mail sporadically, it was a race to weed out the junk and extract my letters in time to provide more space.

Canada Day came and I watched the fireworks from my balcony. The concrete was blackened and sticky from the grease of industrial kitchens venting into the alley below. I couldn't see the explosions directly, but I could see their fragmented reflections in the blue-toned windows of office towers.

Just listen to the music of the traffic in the city, I hummed to myself. At night, the light pollution of Robson Street shops provided safe passage to the washroom.

Then the toilet broke in the suite above me.

Cracks in the foundation

For the most part, the building expressed its displeasure through watery assaults, but sometimes it mixed things up. My car was parked in a subterranean plot, floors below, when insulation began to crumble off the ceiling and cover it in grey-stained snow.

I complained to the building manager, and then felt conflicted when she informed me some variety of troubled squirrel was nesting in the fire-retardant foam above my parking spot. She told me she would have it "dealt with" and hung up the phone.

A year passed. My boyfriend moved in and pointed out the colour of the walls. "It's like we're trapped in an Easter egg," he said. The building was not amused. The pipes burst in the apartment next door and we came home one night to a sobering flood. For a week, the dehumidifiers growled around the clock, singing of the building's victory. "At least it seems to hate the neighbours more," I told my boyfriend. 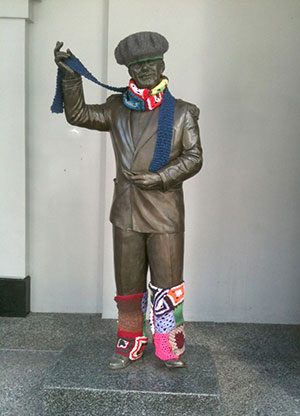 Guarding the door: the sculpted doorman at Erin Ashenhurst's former building was a popular target for street-art modification. Photo by Erin Ashenhurst.

During the Olympics we listened to Robson Street flash mobs and drum circles, all but the furthest circle of spectators obscured by mossy rooftops. We sealed ourselves in from the smoke of hockey rioting and watched on the news as our neighbourhood convenience stores were looted by juvenile hordes. Special offers from Vegas hotels and the monthly magazine for Audi owners crowded bills and birthday cards in the mailbox; some were lost.

The lights are much brighter… where?

Then one day, the landlady's son called. "We really appreciate you helping us with the mortgage these past years," he said. He told us his mother was moving back and would reclaim the apartment.

I was shaken, but I suppose no one really expects an intervention. I wondered what his mother would think of her mauves and blues now stained with the tides of floods, the boils in the bathroom ceiling, the swelling and gaping of the wood laminate -- these signs of the building's violent disapproval.

We signed a lease in East Vancouver and packed up. Checking the mailbox for the last time, I shuffled our bills and encountered an invite to the Luxor hotel addressed to a "valued customer."

On the front was a photo of its cultish, mirrored pyramid emitting a thick ray of light into the night sky. I felt lucky our building wasn't armed with lasers. I shoved the flyer in my bag as a memento and hummed as I drove across the bridge.