In Dante’s The Divine Comedy, a classic medieval travelogue, the reader encounters soothsayers and fortune tellers with their heads on backwards in hell.

The former visionaries can no longer see what lies ahead because that’s what they did in real life. Hell just makes a mockery of such things.

And that’s where North America has now arrived with wildfires and climate change, argues Ed Struzik in Firestorm, an essential and crackling good read on the new reality of megafires.

Thanks to the way climate change has collided with the growth of industrialized communities in forests, wildfires have got wilder, bolder, hotter, costlier and larger. Megafires are now poised to unsettle much of North America — and anyone who likes fresh air.

Lessons From the Beast

Last summer the government of Alberta reluctantly released the findings of an inquiry into the Horse River wildfire in Fort McMurray.

The highly critical report highlighted a number of surprising issues that were largely ignored or under-reported by the media.

For starters, climate change means more wildfires are starting as early as May. But Alberta’s firefighting system (as in much of the Prairies and the North) is still not designed for an early spring startup.

There was, for example, no water bomber stationed in Fort McMurray, the nation’s oil capital, in early May.

Fighting a fire requires a unified command centre, but in Fort McMurray the regional municipality, oilsands companies and Alberta’s Agriculture and Forestry Ministry didn’t function “in a unified way for several days or at all for the duration of the wildfire,” the report found.

At one point the municipality and oil companies hired aircraft to gather fire intelligence when the government was doing the same thing.

Provincial weather forecasts, which greatly underestimated the severity of the conditions at the time, also need “to be more informative and definitive,” the report recommended.

A major bitumen pipeline corridor, for example, hindered the movement of heavy equipment for wildfire suppression at the beginning of the blaze. Shutting down bitumen facilities — if not done properly — can render them useless and have national economic consequences.

A team of trained and experienced fire experts from Slave Lake, who battled a 2001 fire there that consumed 500 houses, were uniquely prepared to deal with the situation in Fort McMurray. But they were never integrated into the fight and left early, the report found.

The report concluded that preparation for wildfires must become a major political effort and that “the threat of wildfires in Alberta only stands to grow, driven in part by a changing climate and increasingly mature forest complexes.”

This summer British Columbians got a smoky taste of the new realities. A record fire season in the Interior displaced 45,000 people, racked up nearly $500 million in firefighting bills and charred almost a million hectares. Meanwhile, urban dwellers choked on the smoke and beheld orange-hued landscapes.

Fire and forestry scientists foretold this unfolding horror story long ago. As Struzik documents, it is only politicians who don’t yet appreciate that climate change has ended business as usual in our forests. As a consequence, the continent now has passed into a singular hell of megafires from California to Fort McMurray.

Canada is squarely part of the problem. Despite being a boreal nation shaped by northern forests that were “born to burn,” as Struzik puts it, the federal government has made things worse by gutting its ability to respond to wildfires.

Canada was once a leader in fire research, but no more. This year British Columbia could barely stay on top of its record-breaking fire season. In 2015 Alberta cut its wildfire prevention and management budget by almost $15 million just months before being humbled by the “Beast” in Fort McMurray.

Provincial governments now spend more money fighting fires or bark beetle plagues than they do on conservation or fire prevention programs in rural communities. How Canadian is that?

The fire science that Canada’s petro-politicians have chosen to ignore isn’t rocket science. A century of successful and aggressive fire suppression has created expanses of ungainly wood piles all ready to go up in smoke.

In addition the undisciplined consumption of fossil fuels has changed the climate and given us warmer temperatures, which in turn have extended the tree-burning season and invited more lightning storms.

Hot air from the Fort McMurray conflagration, Canada’s costliest natural disaster, even formed a pyrocumulonimbus cloud that triggered its own lightning storm. It sparked new firestorms more than 30 kilometres away from the main fire. That dragon-breathing development shocked and awed even seasoned fire scientists.

Not much escapes Struzik’s curiosity about the evolution and impact of megafires. Did you know, for example, that smoke from an Alaska fire in 2004 increased dangerous ozone concentrations in Houston, Texas, by 50 to 100 per cent? Or that 82 million North Americans could be breathing noxious smoke from megafires by mid-century? Or that the Alberta Chinchaga fire in 1950 darkened the skies of the eastern U.S. so severely that baseball fields turned on their lights at midday?

To illustrate what it is like to live through a fearful firestorm, Struzik offers a masterful account of Fort McMurray’s Horse River fire. Started by an ATV vehicle, it became a “Beast” that consumed 2,000 homes and changed the lives of 90,000 people. The conflagration, of course, largely caught the province flatfooted. To this day “the godless event,” as one survivor described it, continues to haunt the health of the community.

Perhaps one of Struzik’s most startling chapters concerns the impact of megafires on watersheds. In 2002 the Hayman fire baked a forest providing drinking water to 75 per cent of the citizens of Colorado.

The super hot fire denuded the landscape. Without trees and stable soil to soak up water, heavy rains then sent ash and heavy metals into reservoirs, clogging water treatment facilities. Despite the planting of 175,000 trees and the passage of 15 years, the problems still persist. It is instructive that most North Americans get their water from forested watersheds. A megafire, in other words, can change all conditions of life.

Forest fires that burn hotter, wilder and larger are now poised to change our lives, warns Struzik. The Institute for Catastrophic Loss Reduction lists Vancouver, Victoria and Jasper as likely candidates for purgatory, if not hell itself. Fire experts suspect that Banff National Park, Timmins and Prince George are also at risk. Minnesota, Michigan, Maine and New Jersey are becoming more combustible too. 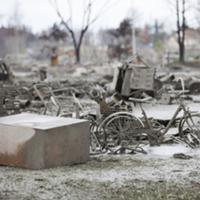 ‘Inside the Inferno’: Essential Reading to Prepare for the Next Fort Mac

Much needs to be done to prepare for the new realities, but business-as-usual politicians seem more intent on fuelling the problem with their pipeline schemes than they are in investing in wildfire science or making forest communities more resilient.

Some solutions are quite ancient. As Struzik notes, Indigenous people understood the value of prescribed burns. The Blackfoot and Cree knew a good fire could rejuvenate a berry patch as well as restore habitat for elk and bear.

If North Americans want to reduce the severity of megafires, they will have to become more adept at starting little ones and respecting fire as one of nature’s enduring landscape engineers.

Struzik, easily one of the nation’s finest science writers, interviewed hundreds of fire experts and firefighters for Firestorm. And it shows. Readers will learn, for instance, that Mike Flannigan, one of Canada’s top fire scientists, caught the fire bug while playing with matches as a child.

In many respects Firestorm belongs to a new kind of prophetic non-fiction — a sort of science noir on cataclysms engineered by human progress.

Firestorm belongs in both depth and timeliness next to Elizabeth Kolbert’s fascinating and grim account of the forces eroding biological diversity in The Sixth Extinction.

When recently asked why so many chapters in Firestorm begin with pithy quotes from the The Divine Comedy, Struzik offered this jaunty explanation.

“I see Dante’s Divine Comedy as a philosophical roadmap to the future of wildfire management. The only problem with that is that we are going the wrong way. We are in smoky purgatory now on a quick descent into a fiery hell.”