In March, Alberta Agriculture and Forestry completed a report on the Horse River wildfire (also known at “the Beast”) that destroyed much of Fort McMurray in May 2016. The report wasn’t released until June, presumably because its findings would embarrass the provincial government.

Perhaps so, but the report also describes much that went right during the wildfire. What went wrong was due largely to an event beyond the scale of previous worst-case scenarios. A system able to fight lesser wildfires found itself suddenly, horribly, overmatched.

The report deserves careful attention by Canadian firefighting professionals, civil servants and their political masters. The Horse River wildfire was a disaster on the “wildland urban interface” where many Canadians live: houses made of wood close to forests made of wood. It wasn’t the first, and won’t be the last.

As more communities push into their neighbouring forests, driven by people’s desire to live close to “nature,” nature will push back. If those communities want to last, they’ll need to adapt themselves — which means adapting their culture to respect the wilderness they live beside. 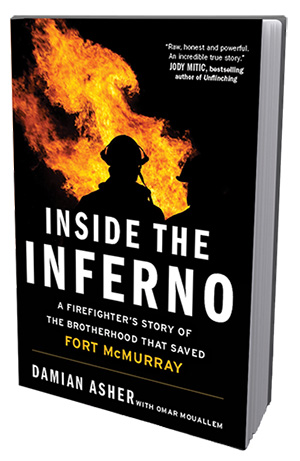 A dry government report, however, isn’t going to create the political will to change the way we live on the interface. Damian Asher’s book should have a much greater impact on the voters than the advice of government bureaucrats — and on his fellow firefighters.

Asher himself is no writer, but his co-author Omar Mouallem certainly is. While told in first person by Asher, the book is based on extensive research and interviews with others involved in the fire as well. So it reads like a disaster thriller made even more dramatic by being real.

We follow Asher and his colleagues through the early days of the fire, which started on Sunday, May 1 as Fort McMurray sweltered in one of the hottest, driest springs in memory. When the fire suddenly exploded on Tuesday, May 3, Asher and his colleagues found themselves pitched into the biggest battle of their lives. Within a few hours, though, he was feeling overwhelmed: “I’ve got 15 years of experience, but I’d never had to take a stand like this.” 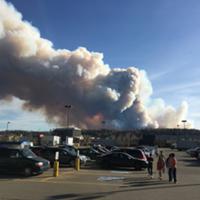 Despite their training, experience and equipment, Asher and his crew were soon improvising, even resorting to using evacuated homeowners’ garden hoses rather than waste time setting up and repacking their own gear. While their spouses and children were struggling to get out of town, firefighters worried also about their own homes.

Like waging war, firefighting on this scale is a prodigious consumer of materiel. After a couple of days of nonstop combat, Asher describes the pleasure of ransacking a fire-equipment supply warehouse for his crew and other colleagues. Food was also a problem as firefighters worked with little or nothing in their stomachs — and when food did turn up, kitchen facilities and cooks were unavailable.

Asher echoes one key point in the Alberta Agriculture and Forestry report without complaining about it. He and his crew were municipal firefighters, skilled in dealing chiefly with structural fire. Now they were trying to co-ordinate with colleagues trained for wildfires as well as those working for oilsands operations, as well as firefighters from all over Alberta. All brought formidable skills and resources to the fight, but it wasn’t easy to deploy the outsiders to maximize their impact. Everyone did what they could and improvised when they had to.

Knowing when to rest

The Alberta report and Asher agree on another point: the firefighters didn’t know when to quit. For Asher and his men, it was their own community they were trying to save, but even the outsiders were reluctant to pause for absolutely needed rest. It was admirable, but it took a toll on their efficiency.

Fort McMurray before May 1 sounds like a typical small Canadian city, if more prosperous than most, and structurally not much different from other communities farther south but still on the wildland-urban interface. Even the subdivisions’ rustic names, beloved of developers, emphasize their closeness to the interface: Birchwood Trails, Timberlea, Thickwood.

That made the city more vulnerable than it needed to be. Not only are most houses made of wood, but even their decor is flammable. Asher describes how one home’s wood-chip garden pathways led the fire straight to the house’s vinyl siding.

Even Asher lost his house, for all his well-informed preparation. He had stored the family photos in a safe guaranteed to survive 840 degrees for half an hour. He lost them anyway. Days of sifting through the ashes brought him melted fragments of his family’s past, and one critical item: his wedding ring, left in a night table the night before the fire started.

A neighbour to cherish

Like many firefighters, Asher knows a lot of trades. A contractor as well as a firefighter, he is rebuilding his home and planting new trees on his acreage. He’s clearly the kind of person you’d be glad to have for a neighbour and go-to guy. Like most of his colleagues, he now uses an inhaler and takes steroids for the respiratory problems he acquired in that first week in May 2016. He sees a smaller community rebuilding around him, with fewer calls for first responders and many lots left empty. 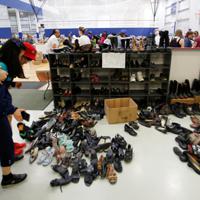 Many other firefighters across Canada will read his book — not just as shop talk, but as a cautionary tale about what they are likely to be up against in the future. For that reason, politicians and municipal officials should read it at least as closely as they read the Alberta report.

What happened to Fort Mac was dramatically worse than state-of-the-art firefighters ever imagined or trained for. As the climate changes, more Canadian communities will experience hot, dry spring weather. Then a lightning strike or a human action will ignite disaster. Everything will depend on preparedness, and preparedness depends on a community’s readiness to think about disaster and spend what it takes to prevent it.

Given our preference for always looking on the bright side of life, many communities will be tragically unready. But Asher and his co-author Mouallem have at least given us fair warning.