The Fort McMurray fire startled everyone with its size and speed and destruction, but it shouldn't have. As bad as it was, "the Beast" was just the latest in a long string of wildfires in the boreal forest. In fact, many tree species in the boreal forest actually need such fires before they can propagate. 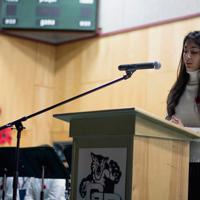 Are BC Schools Ready for Syrian Refugees?

As of mid-June, according to the Alberta wildfire report, the fire had burned more than 6,000 square kilometres. It's listed as "being held," not "under control," and the fire may yet explode again. It might even burn into the peat beds, smoulder through the winter, and return as a "carryover" fire next year.

Cordy Tymstra's The Chinchaga Firestorm reminds us that a similar fire (or system of fires) burned through northeastern B.C. and northern Alberta more than 65 years ago. Its effects were felt as far away as Europe, yet it was lost to the official Alberta record for years because it was a "ghost fire," one that need not be fought because it wasn't within 10 miles of a road. It didn't even get a name at the time, although it was the largest fire North America's recorded history.

It was a very different time. Northeast B.C. and northern Alberta were thinly populated. Postwar governments were trying to remedy this by encouraging homesteaders to clear land and plant wheat. Burning off a patch of woodland was a quick way to get started.

Tymstra, an Alberta government wildfire science co-ordinator, says Chinchaga, named for a river in northwestern Alberta, likely started from fires set by seismic crews looking for oil and gas near the B.C.-Alberta border.

Provincial governments were encouraging farming, oil and gas, forestry and any other industry interested in the region.

'Remote, unfightable and feeding on a near-infinite fuel supply'

Firefighting was hard in a region with few people, roads and resources. A firefighter was paid 20 cents an hour and often had to go to work on horseback. Surveillance to spot and monitor fire was patchy at best, sometimes relying on military or civilian pilots for reports. (One group of fires was traced to military pilots' habit of tossing still-lighted cigar butts from their cockpit windows.)

Chinchaga was a classic example of a "non-actioned" fire -- remote, unfightable, and feeding on a near-infinite fuel supply.

It was also a classic example of how weather drives such fires. It started in June 1950 under a dome of high pressure brought high temperatures and dry air. All summer long it moved in stages: the dome would collapse, a cold front would come in from the west, and winds would suddenly double its size. Then a new high pressure dome would form, drying out still more fuel until the next cold front.

In the process, Tymstra says, about 100 fires broke out in B.C. and Alberta. In Alberta, Chinchaga was part of about 30 fires burning on "the hottest September 22 on record." Then another cold front swept in and Chinchaga exploded yet again. By Oct. 4 it had burned around 15,000 square kilometres, more than twice that of Fort McMurray's "Beast" and equal to more than half the area of Vancouver Island.

Oddly enough, Chinchaga's effects were felt far away, but not in southern Alberta. Smoke from the firestorm moved east, then southeast into the United States, and then across the Atlantic to Britain and northwest Europe. At an afternoon baseball game in Ohio, the lights had to be turned on. Countless Americans, five years after Hiroshima and Nagasaki, thought this might be the start of World War III or the testing of some new weapon -- or just the end of the world.

Once in a blue moon

Even more strangely, the smoke rose to the jet stream until its particles could play optical tricks -- including turning the sun and moon distinctly blue. Tymstra goes to some effort to explain the physics and optics behind this phenomenon.

The Great Smoke dissipated and the fire itself was soon forgotten, except by Alberta foresters and firefighters.

But in the 1980s, scientists re-examined the Chinchaga fire when they began to think about the consequences of a major nuclear war. The concept of nuclear winter emerged in part from the fire and its smoky aftermath.

Just before Chinchaga, settlers had been penalized for the first time for setting fires without permits. Alberta governments were beginning to realize that the forest wealth in the north was worth protecting, and had expanded forestry and firefighting services. They used the new revenue from Alberta's oil industry to fund the programs, and the forestry service reported good fire-suppression results in 1950.

But the report excluded the Chinchaga ghost fire, which had no bureaucratic recognition. Not until 1958 would it cease to be an "un-fire" and included in Alberta's fire history.

Aging bureaucrats (and teachers) recognize this as the wisdom deficit that results from turnover of personnel and politicians. When the old bureaucrats retire, or a new government moves in, the old knowledge is lost -- sometimes deliberately, so the newcomers can put their own stamp on events. Chinchaga, once found again, was soon forgotten. Only a handful of fire historians and old-timers preserved its memory until the Beast suddenly erupted over Fort McMurray.

So we should be grateful to Cordy Tymstra for this exhaustive study. But not too grateful.

While he has done remarkable work in researching so many aspects of the Chinchaga firestorm, Tymstra has organized it very poorly, and his editors have not saved him.

The book is basically well written, and Tymstra's science seems solid. But his narrative rarely lasts for more than a few pages before veering off into a digression, or switching from events in 1950 to events in 1948. Various forestry officials' careers provide a sort of thread, but the officials are little more than names occasionally popping up and vanishing again.

Entertaining factoids, but too little context

So it's interesting to learn a lighted cigar butt can survive a fall of 1,800 metres and start a wildfire, but the entertaining factoid needs to appear in a coherent context. We never know, as we finish one paragraph, whether the next one will develop what we've just read or take us off in some unexpected direction. We have no chance to assess what we've just read, or to understand how one topic relates to another.

It's almost a law of physics that bad things happen between the conception of a book and its first printed copy -- when suddenly all its failures leap off the page. In this case, those failures range from embarrassing typos and grammatical errors to the structural problems that drag us from present to past and back again, and from one topic to another.

Even so, fire scholars, foresters, and policymakers will be reading this book carefully. That's because we can expect ever more fires like Chinchaga and the Fort McMurray Beast. Scientists expect the world to pass the mark of 400 parts of CO2 per billion this year. We could hit 450 ppb in just 20 years, at which point firestorms like Chinchaga will be the new normal.

Well before then, I hope Alberta's government coughs up a little money for the University of Alberta Press to hire a couple of good editors. With their help, this book could be rebuilt into an important resource that all Canadians would need to read and understand.