[Editor's note: This is one of three excerpts The Tyee is publishing from I'm Right and You're An Idiot: The Toxic State of Public Discourse and How to Clean it Up by James Hoggan, published by New Society Publishers. A public relations expert who co-founded DeSmog Blog, Hoggan will speak at the Vancouver book launch May 25; details here.]

When I first began thinking about writing I'm Right and You're an Idiot, I sat down with Steve Rosell and Daniel Yankelovich, two eminent pioneers in an evolving field that uses dialogue to deal with highly polarized public conflict. Yankelovich explained that polarization is dangerous because it interrupts lines of communication and leads to gridlock. It stops us from tackling urgent problems because without consensus we cannot take effective action. Rather than highlighting our differences, he said we should work toward finding common ground, and move into a place where we can reserve judgment until we have considered other ways to approach controversial issues. 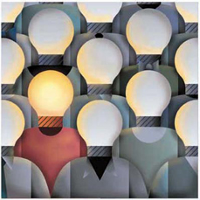 Yankelovich once wrote: "Democracy requires space for compromise, and compromise is best won through acknowledging the legitimate concerns of the other. We need to bridge opposing positions, not accentuate differences." He added that unyielding one-sidedness creates a mood of corrosive bitterness. Worst of all, it is a formula for losing the battle, whether it's a war on terror or combating global warming. Taking a polarized attitude toward critical issues will inevitably yield answers that are dogmatic and keep us from arriving at the truth.

Adversarial forms of discourse have their uses when attacking special interests in a courtroom or on television when we want our talking heads to be entertaining, but it's the wrong way to cope with the gridlock threatening to paralyze our society. He said today's typical model of mass communication -- "where people are not listening, are mistrustful, polarized, are not sharing the same basic understandings or mental frameworks" -- distorts any possible discussion. We desperately need to find common ground.

'Media plays by its own rules'

Yankelovich believes the quality of public discourse today is "very poor" partly because people are generally inattentive to public affairs; the media plays by its own rules; and our public discourse is undermined by a lack of understanding about the rules of communication.

In particular, the scientific community is largely innocent of the rules of public discourse. So we have gifted experts offering abstract, technical, difficult, highly qualified statements, and a media that presents what they say in the form of controversy. The scientific community assumes the same rules of communication are always applicable and rational, that people are attentive, open-minded, persuaded by facts and believe that those who are presenting information are people of goodwill, and not deliberately trying to manipulate them. But none of those things are true.

Communicating under conditions of mistrust requires a different approach, said Yankelovich, who spent the first 30 years of his career in market research. The first step is to acknowledge the skepticism or concern people feel, and then encourage them to reason why in this particular instance it isn't applicable.

The approach should be: The burden of proof is on us; performance should exceed expectations; promises should be few and faithfully kept; core values must be made explicit and framed in ethical terms; anything but plain talk is suspect; all bearing in mind that noble goals with flawed execution will be seen as hypocrisy, not idealism.

First, get people to listen

When dealing with conditions of inattention the objective is obvious: Get people to listen. If they are mistrustful at the start, they won't listen even to fair and balanced points of view by distinguished and credible scientists. So a key place to begin is for policy makers and scientists to recognize that communication is not going on when they think it is. "We have an almost extreme situation where the very intelligent elites are sort of mumbling, and bumbling, and proceeding as if they were communicating -- when they're not." Yankelovich noted the advertising profession has developed ways to communicate under conditions of mistrust and inattention, and others should too.

When we understand these elements -- of polarization, inattention and mistrust -- it's clear why the truth about global warming has become so distorted and this is also where authentic conversation comes in. Yankelovich believes dialogue is not an arcane and esoteric intellectual exercise. It is a practical, everyday tool that is accessible to all, and when we use dialogue rather than debate we gain completely different insights into the ways people see the world.

Those who say they are "dialogued out" on topics such as terrorism or pipelines are actually tired of the lack of real dialogue, he stressed, because most dialogue is just disguised monologue.

During our interviews, Yankelovich and Rosell explained the clear differences between dialogue and debate: In debate we assume we have the right answer, whereas dialogue assumes we all have pieces of the answer and can craft a solution together. Debate is combative and about winning, while dialogue is collaborative and focuses on exploring common good. Debaters criticize the views of others and defend their assumptions, whereas in dialogue we reveal assumptions and reexamine all positions, including our own.

I especially appreciated the comment that debate is about seeing weaknesses in other people's positions, while dialogue is about searching for strength and value in our opponents' concerns. This means approaching environmental issues with an attitude that we could be wrong and others could be right.

Yankelovich explained that the special form of communication called dialogue is only needed when people don't share the same framework, when ordinary conversation fails and people are passing each other "like ships in the night." When everybody is singing off the same sheet, shares the same values, goals and framework, we communicate just fine. But when we have highly educated scientists communicating with poorly educated citizens, as well as policy makers, people from the oil industry and stakeholders, it's obvious that everybody brings a different frame to the issue.

Climate change is a perfect storm when it comes to communication, because it involves a broad array of stakeholders, people with differing values, frameworks and levels of education -- all being whipped up by winds of passion and emotion. Rosell added that a growing gap between elites and the general public breeds mistrust between those different universes of discourse. "Government folks talk in jargon, and scientists talk about data. The public talks a different language, and you have to earn their trust."

In our lawyer-ridden society the dominant mode of communication is advocacy, Yankelovich observed. Advocates are trying to sell something, whereas dialogue needs people who will listen, pay attention and suspend judgment so there is enough shared framework that even if people disagree, they can find some common ground.

Yankelovich and Rosell have identified a process they call the public learning curve that describes maturing public opinions, where people's views evolve from poorly informed reactions to more thoughtful conclusions.

The three-stage process begins with building awareness and consciousness (where advocates and the media typically do a good job).

The second stage involves working through wishful thinking and denial, resistance to change and mistrust, grasping at straws, deliberate obfuscation and lack of urgency (which is where dialogue comes in).

The third part of the learning curve is when people come to resolution (which is handled by decision-makers and governance institutions). "Much of our work focuses on improving the 'working through' stage, which our society does not handle well and where critical issues like climate change can get stuck for years or decades," said Rosell.

In conclusion Rosell emphasized: "Public discourse matters, public confidence matters and trust matters if you want to achieve anything collectively. But what's going on now is not competent, not effective, not legitimate and it's undermining public trust."

Rosell sees a deliberate attempt to fracture society now and we've all seen it during election campaigns when we hear outlandish attacks, out-of-control PR and distorted information, but he said this conduct has a cost when it enters everyday life. "You keep doing that and doing that, and you basically pollute the commons."

When public conversations are corrupted, when we can't think things through because of a tangle of polarization, attack rhetoric and failure of experts to communicate, it is difficult if not impossible for people to move from raw to considered opinion. It is hard enough to go through these stages when we are exposed to clear arguments and healthy discourse, he said, adding that people can surprise themselves when they find common ground and manage to talk and disagree in a different way.

Tomorrow: Why "name 'em, blame 'em, shame 'em advocacy" may not be the best way to win.