First, a confession: I didn't bother to read this book when it first came out because I thought Justin Trudeau, at best, would lead a Liberal opposition to a Tom Mulcair NDP government while the Conservatives faded into the mist. 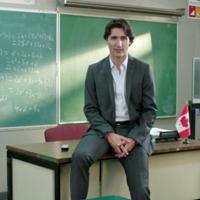 Live and learn. In my case, the lesson came last spring when my wife and I attended a Trudeau pep talk at the headquarters of Terry Beech, the Liberal candidate in our riding of Burnaby North-Seymour. The big room was jammed with people from many Lower Mainland constituencies, and they struck me in two ways: they were deeply multicultural, and they included all demographics, from teens to seniors.

Without fanfare, Trudeau stepped through the front door alone, with zero security, in dark slacks and a white shirt. That was as close as I've ever been to a charisma shockwave, far closer than when I glimpsed a young Fidel Castro far across the campus of Columbia University in the spring of 1959.

Backed by his local candidates, Trudeau stepped onto a low platform and rallied the troops with a fluent and encouraging speech -- none of the ums and ahs of his media scrums, and certainly not read off cards.

As he spoke, I remembered a visit last spring to our local high school by Stephen Harper, when burly men in tight suits with wires in their ears had trotted up and down the school's access lane and Mounties had guarded every school door.

And I remembered Trudeau's father, campaigning in B.C. without visible security in 1968 after the assassinations of Martin Luther King and Bobby Kennedy. The Vancouver Sun's columnist Denny Boyd both fretted and rejoiced about it. Whatever might happen in the U.S., we Canadians were still keeping our wits about us, living on social capital the Yanks had long ago squandered.

I am not a fan of dynastic politics, whether it's the House of Saud, the House of Windsor, or the House of Clinton. We understand the principle of regression to the mean; none of Bach's kids were composers as good as the old man, Bill Bennett wasn't a patch on old Wacky, and Justin Trudeau is far from the intellectual giant his dad was.

But his intellect is formidable nonetheless, and perhaps more subtle than his father's. Others have already noted the resemblance to Shakespeare's Prince Hal -- who after a wild youth transforms himself into a real monarch. And like Falstaff, Stephen Harper, and Tom Mulcair, a lot of us feel both startled and abandoned. What was that all about? What happened to the party animal we all thought we knew? Who is this guy?

Trudeau's book is a Bildungsroman, the story of an education, and it was an education like few others. His father, a brilliant, Jesuit-trained intellectual, married his mother when he was a bachelor in his fragile 50s. Rather than a red sports car, he'd acquired a beautiful, intelligent, and bipolar young woman.

We enjoyed the years of ensuing gossip and scandals, but Justin had to live through them, and through the aftermath. They taught him his father's strengths and limits, and his mother's. He might travel the world as the prime minister's son, but he also had to deal as a schoolboy with his mother's distress when a boyfriend left her and she brought him her misery.

A typical broken and blended family

Young Justin Trudeau's life was privileged, but far from easy, and in some ways he's a very typical product of late 20th-century Canada -- growing up in a broken and blended family, with his parents' later children as half-siblings. He appears to have taken it in stride.

His account of growing up includes both high-quality gossip about life at 24 Sussex and some penetrating remarks about his father. After his brother Michel's death in a B.C. avalanche, Justin tells us, Pierre Trudeau remarked, "If there is no afterlife, then nothing I have done in my life matters at all." That faith rarely if ever emerged in public. The death of Michel appears to have shattered the father, sending him into a decline from which he never recovered.

(And lest we forget: At Pierre Trudeau's funeral celebrity reporter Mike Duffy accosted Margaret Trudeau to ask if she had remembered that it was also Michel's birthday that day. Her collapse before the cameras should have earned Duffy a deep, hot hole in Hell; instead he ended up appointed to the Senate by Stephen Harper, which may have been just as good. In describing his father's death, Justin Trudeau does not mention the incident.)

Having known a few sons of eminent fathers, I'm not surprised that Justin Trudeau kept out of his father's shadow. As an English major, I admire him for being one too, rather than predictably heading for an MBA, or degrees in political science, or some other "practical" subject. His account of his teaching career resonates; he loves talking shop, as good teachers do, both the classroom dynamics and the politics.

He also discusses his other jobs with the same pleasure, even being a bouncer in Whistler, relying on talk rather than force to get drunks out the door. And whatever he does, he describes it as preparation for politics.

Moreover, it's preparation for advancing and protecting his father's politics: the Charter, multiculturalism, the open and experimental Canada that emerged in 1968. At a certain point the book becomes a little repetitious, even for readers who endorse that politics. But it should evoke nostalgia in sympathetic older voters, while telling younger voters what they shouldn't take for granted.

His focus on multiculturalism is understandable, given his choice of ridings when he decided to go into politics in 2007. Papineau is a poor area of Montreal, populated with immigrants from all over the world; to win it he would have to gain their support, and he did.

A tight focus on issues

Trudeau's real education begins with his run for the Liberal nomination and then his first campaign in 2008. As with teaching, his love of the process comes through in his description of events -- including a few stories told at his own expense.

But he doesn't ramble from anecdote to anecdote; his focus is always on how he learned about issues that are urgent today, whether anti-Muslim bigotry or inequality or parliamentary malaise. As he runs through the narrative of the past seven years since his first election, every experience is another line in a curriculum vitae designed to make him look like a natural choice for prime minister.

His motives are sometimes lost in the blur of events he narrates, but at some point readers are likely to pause and reflect after getting the moral of one story or another. He is trying to please everyone, generally succeeding, but also setting himself up for a backlash from disappointed voters.

For me, alarm bells go off when Trudeau describes campaigning in Calgary, where resentment of his father's National Energy Policy still runs deep and hot. Among the lessons he learned from the NEP and its aftermath, he says: "First and foremost, obviously, resource development and the policies we create to manage it continue to be among the handful of big issues that define our success as a country. This is arguably ever truer now than it was in my father's day. It's certainly the case from an economic and environmental perspective."

This sounds to me like a vague promise for everyone and a hard policy for no one. The oil patch can take heart from it; surely resource development is a big issue. Environmentalists can also take heart about the "policies we create to manage it."

As a writer, I admire Trudeau's graceful ambiguity, and it may have won him some crucial Alberta and B.C. votes. As a citizen, I can foretell tears before bedtime when Trudeau inevitably breaks someone's heart. He may seek common ground among all Canadians, but the science seems clear: We can go on digging oil and shipping it somewhere to be burned, or we can begin to slow climate change. We can no more do both than a smoker can quit cold turkey every night and light up in the morning.

Justin Trudeau's first autobiography is a readable book that should be read, whatever your political views. Like every prime minister before him, he deserves our close attention. On balance, he seems willing to take us where most of us want to go.

But having underestimated him all his life, let's not overestimate him now. His book reveals him as a very intelligent, observant, outgoing man, likely a smarter politician than his father ever was. But that may be because his father had little guile, and his son has a great deal of it.