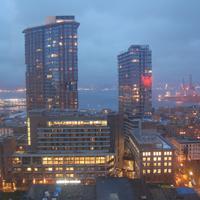 [Editor's note: Tonight at Inform Interiors, Vancouver's design aficionados will celebrate the launch of Selwyn Pullan: Photographing Mid-Century West Coast Modernism, published by D&M Publishers and the West Vancouver Museum. The new book and corresponding exhibition at the Museum showcases the breadth and depth of what we now call "Midcentury West Coast Modernism." The book contains a wealth of full-page photographs, plus texts by Kiriko Watanabe, Barry Downs, Don Luxton and Adele Weder. The following article is adapted from Weder's essay, "Repositioning the New."]

Selwyn Pullan and his midcentury cohort were fortunate to begin their careers in a now-vanished golden age. In the 1950s and '60s, a culture of architecture and design flourished along the West Coast. A new building approach espoused locally sourced wood, post-and-beam construction, and close connection with the region's lush natural surroundings. And in a happy symbiosis, the photography and magazine industries were rising at the same time. The architects took the lion's share of the credit, but it was a small coterie of hyper-talented architectural photographers who brought their art to life. In California, Julius Shulman was the star; in British Columbia, Selwyn Pullan. Now 90 years old, Pullan still lives in the same North Vancouver bungalow cum photography studio designed by longtime friend Fred Hollingsworth. Though always retaining a much lower profile than the architects whose work he photographed, Pullan is now being recognized as an artist in his own right, with a series of one-man retrospective exhibitions first launched and now freshly relaunched at the West Vancouver Museum. The book is a testament not only to Pullan's artistry, but also to the lost beauty of the West Coast architectural landscape.

West Coast Modernism turned out to be a game-changing movement in North American design history. With its naked wood, sheets of glass and rectilinear massing, it was a stark visual departure from the conventional peaked roofs and mullioned windows. But the new design approach distinguished itself in primordial ways that transcended style. The earliest post-indigenous settlers had adapted a weak imitation of colonial forms and signifiers in their built environment, which had no relationship with the adjacent sea and verdant hillsides. This striking new architecture nestled right into the land, with floor-to-ceiling glass to take in the views. Its message was clear: the erstwhile goldrush town and colonial outpost was now its very own place.

Lighting and views and spatial sequences, rather than luxe ornamentation, comprised the new design values. On this initial wave came architects Ned Pratt, Peter Thornton, Duncan McNab and John Porter; following them came a second wave that included Fred Hollingsworth, Ron Thom, Arthur Erickson and Barry Downs. Pullan befriended many of them, gaining the trust and access that would become crucial to understanding their work.

Academics and leading architects championed the new paradigm. But that elite group, then as now, was never as powerful or influential as it believed itself to be. The masses neither read the same publications nor spoke the same language, and generally didn't know or care about the avant-garde taste-makers. Selwyn Pullan's photography served as a crucial liaison between these groups. His photography emphasized the spatial arrangements rather than the chattels and gewgaws. In projecting a home as a sequence of elegant planes and spaces as architects envisioned them, rather than as an oversize container full of objects, Pullan's architectural imagery suggested a new purpose for the family home beyond status quantifier.

Making love to the site

For the modern movement to take root in British Columbia, architecture needed a mainstream presence, a client base and a mythology. That's where shelter and lifestyle publications and their imagery served as kingmakers. From the perspective of the digital age, it's difficult to imagine an era where black-and-white photographs printed and bound in magazines could wield such influence upon an entire generation. But they did: the images laid out in the professional journals facilitated the inter-architect conversation, and the consumer magazines brought the movement to the rest of the people.

As published in popular lifestyle journals like Western Homes & Living, Pullan's photo-essays made the new housing schemata accessible. His imagery is infused with vitality, sometimes showing children at play and always showing the architecture as integral to modern family life.

The postwar decades comprised a preposterously optimistic period that would not last forever, but it enabled a full-throttle surge of civic creativity. Pullan and his cohort were part of this symbiotic collegiality; it forged their professional trajectory even as their own work helped forge the careers of others. Through these kinds of images, Western Homes & Living was, in effect, pitching the West Coast modernists as the new Romantics. Pullan’s deft exterior shot of Ron Thom's Forrest House in West Vancouver, in which the sloping planes of the roofline seem to respond directly to the undulating landscape, best encaptures Thom's most famous axiom, that a building has to make love to the site.

A half-century later, the critical and public appreciation of the Forrest House and other landmark projects, including the Tretheway House (by Fred Hollingsworth) and Baldwin House (Arthur Erickson), has endured, with the continuing interest evidenced by their continued presence in media coverage, exhibitions and ticketed heritage tours. Now that so many dwellings have been demolished, the enduring value of his photography becomes all the more apparent.

Pullan's legacy derives largely from his architectural photography, but he also became a prolific advertising photographer. Pullan considers this subsection of his work as a cornerstone of his professional accomplishment, and proudly so. We consider his architectural portraiture today as "art" -- the implication being that his commercial photography is something lesser, tainted as it is by its overt purpose of selling something. We look more trustingly on the editorial sections of magazines, with their serene compositions of tree-framed houses on the water. But these images, too, are selling something -- professional reputations, ideas, ways of life -- just through a more subtle and circuitous route. And for sure, sometimes the media's exultations presented a harder sell on West Coast Modernism than it really warranted. In the article on Ron Thom's new family home in the Capilano Highlands, Western Homes & Living quoted his soon-to-be-ex-wife, Chris, as finding the cedar house surprisingly easy to clean and maintain. When I showed a copy of this same article to her in 2011 -- over 50 years later -- and recited the easy-to-clean comment back to her, Chris sniggered and offered just this one terse response: "What crap!"

Pullan's documentation of West Coast culture evolved from photojournalism to art, with an ethos and trajectory similar to that of André Kertész. Like the streetlife of Kertész's fin-de-siècle Paris or Herzog's inner-city Vancouver, the wood-based architecture that dominates Pullan's narrative is finite. Much of it has already vanished, through erosion or the even more damaging force of economic redevelopment. By interpreting and formatting the strange new forms for a wider public, Pullan made them acceptable and real. He brought them to life, and his work has kept them alive for future generations to contemplate anew.