The end of growth seems literally unthinkable to most of us, including our politicians. Just the other day, Prime Minister Stephen Harper told Peter Mansbridge: "You do need, as we are doing in Canada, you need to undertake a range of measures, not just fiscal discipline, to ensure growth... to increase the growth capacity of our economy." 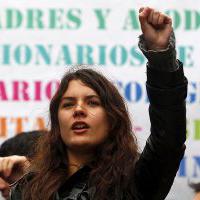 His premise is that economic growth -- creating more wealth to support more people at a higher standard of living -- is absolutely essential. He goes on in the same interview to admit that "growth policies are often politically very challenging as well." In all this Harper is profoundly orthodox, as he was in his 1991 master's thesis criticizing Keynesian economics.

Questioning economic growth started at least 40 years ago, but never gained traction. Vancouver environmentalists in the early 1970s were fond of saying, "Unlimited growth is the philosophy of the cancer cell." The idea faded out with the 1973 oil shock and the recession that followed it.

Heinberg and Rubin both argue that booms depend on cheap energy, especially oil, and recessions happen when oil gets too expensive. They agree that we are now at a "peak oil" point, regardless of how much remains in the ground.

Rubin says the cost of extracting new oil from sea bottoms and tar sands is just too high to keep container ships on the ocean and trucks on the road. Heinberg says the same applies to coal and many other resources, and predicts that China will run out of coal altogether in 33 years if its economy keeps growing as it must.

Both writers dismiss the usual pro-growth rebuttals: innovation won't work any more, at least on the scale needed by the 9 billion of us we can expect by mid-century. Greater efficiency? Been there, done that in earlier oil shocks. We just burn more oil. Nuclear power? Fukushima!

Just pump more oil? The Saudis are using their increased production for their own people, who expect gas at 50 cents a litre and lots of water from oil-fired desalination plants. (Residents of Riyadh daily use 330 litres of water per capita, just like Canadians.)

Neither book pays much attention to the current debate over conservative austerity versus Keynesian government spending. Both Rubin and Heinberg think spiking resource prices make the debate irrelevant; Rubin says the crash of 2008 was due more to high oil prices, not to the housing bubble.

Heinberg and Rubin approach their subject in different ways. Heinberg, an American, pays more attention to U.S. issues. Rubin concentrates on Canadian concerns like the oil sands. Heinberg prepares his brief in endless detail, assuming we know little about economics and less about the upheavals of the last few years. He breaks up his text with countless tables, charts, and mini-essays; they add to his arguments but subtract from their force.

By contrast, Rubin has a more conversational style. He starts each chapter with an anecdote that seems off-topic but prepares us for that chapter's key point, usually delivered in clear, hard sentences:

"Beneath the slogans and campaign rhetoric, plans to put America to work share a common denominator: the idea of growth. Get the economy growing again and jobs will follow. But those plans don't account for a new world of higher energy costs that will prevent the economy from growing at the pace achieved in the last decade when it pumped out a steady stream of new jobs every month."

Rubin also raises an intriguing idea: Rising oil prices could save the planet by driving down our consumption and emissions (and making pipelines pointless with no markets to serve).

Both books deserve careful study. Heinberg's, while quite contemporary, is likely to become a reference thanks to the background material he provides. Rubin's is more accessible (especially to Canadians), but likely to become dated very soon.

In fact, Rubin is already dated. Throughout his book, which was evidently completed earlier this year, he invokes "triple-digit oil" as the force driving us into a no-growth economy. But oil has been trading around $85 lately, down from almost $110 in late February. Perhaps the flirtation with triple digits has already triggered another recession.

Both writers make reasonable arguments for the end of economic growth. But neither deals adequately with how a steady-state economy would actually function. Rubin suggests industries would come home from China and we'd do a lot of job sharing. Heinberg goes into a bit more detail, suggesting a "post-growth" economy evolving on the group and community level: "transition towns" and "common security clubs." It's not enough to persuade.

More seriously, neither really deals with the political implications of the end of growth. And these are very grave.

Remember Audrey II, the carnivorous plant in Little Shop of Horrors that kept demanding, "Feed me, Seymour"? Every industrial nation's government regards its people the way Seymour regarded his plant. Kept fed, the people provide their governments with wealth and power. Stop feeding them, and the people will eat their governments alive.

So the House of Saud keeps its people quiet with subsidized desalinated water. Without jobs or pensions, Greeks are dismantling their country. China, having raised hundreds of millions out of poverty in the last 30 years, must now maintain economic growth rates of eight or nine per cent just to keep pace with the growth of its young job-seekers. Even so, the country experienced 180,000 protests and riots in 2010. No wonder Beijing is annoyed with all our preaching about human rights, as if rumbling volcanoes deserved freedom of eruption.

Imagine, then, a steady-state North America happily biking to work and making its own stuff again (including very expensive iPhones). Without us as customers, China would have to retool to supply its own domestic market, and might not have enough time to do so before the country broke down.

Expensive fuel would have other consequences. Countries like China, South Korea, and Saudi Arabia have already bought up vast tracts of African farmland to grow cheap food for their own people; shipping it home might make it too costly.

Closer to home, imagine the automatic public rejection of a steady-state economy. Ever since 1492, the Americas have operated on the assumption that wealth would increase forever, whether extracted from the ground or from the lives of workers. Workers and CEOs alike dream of freedom in terms of getting a bigger slice of an ever-growing pie. Students postpone their lives and mortgage their futures in hopes of a bigger slice too.

Chasing that dream of endless growth, we fail to realize the chase breeds a profound alienation in many of us. It emerges (so far) not only in Chinese disturbances but in hockey riots, the Occupy movement, the pot-banging in Montreal's streets, and growing resentment of inequality. We are not fed, physically or spiritually.

We are not the only ones. The end of growth would mean a world in which economies are crashing everywhere, civil wars and local wars erupt over dwindling resources, and epidemics rage through malnourished populations. Do we just write off the rest of the planet and hunker down in our green, bike-friendly transitional towns?