Most of English Canada has ignored or misunderstood the Quebec students demonstrating against the higher tuition fees that Premier Jean Charest wants to charge them. Until yesterday's May Day ruckus in Montreal, our media have mostly ignored the story (which says something about our lack of interest in Quebec). When they do report on it, the angle is spoiled brats who don't want to pay for their education like their uncomplaining anglo contemporaries. 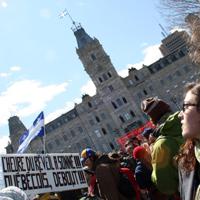 Missing in most of the debate is the fact that these protests have been running for months, involving both English- and French-speaking students. When 100,000 of them go into the streets, it's not just a spring-break party or Stanley Cup riot. If the students are that serious, and the Quebec government is that stubborn, the situation could go far beyond a mere squabble over fees. We could be on the brink of a social revolution.

That's because Quebec shows some striking parallels with what's been going on in Chile, where university and high-school students have just launched their second year of street protests for free, high-quality education. They are unlikely to stop until they have also overthrown the status quo.

Chile has been more or less forgotten by the world since the end of the Pinochet dictatorship 20 years ago. It is now a democracy of 17 million, dedicated to mining copper, making wine and running fish farms. We did notice when the Chilean miners were trapped and then rescued in 2010, with smiling billionaire President Sebastián Piñera there to greet them on their return to the surface.

Chileans themselves weren't smiling about their country's huge income gap and systemic inequality. They were unhappy about a two-tier education system: excellent private high schools and universities or public ones that are mediocre at best. Both tiers are brutally expensive, with families borrowing up to US $100,000 to get a child through university.

But as in Canada, a post-secondary degree is seen as the only real way to climb the social ladder or at least keep from slipping down a rung or two.

The country has been running under the same basic neoliberal system imposed after the 1973 coup by the "Chicago boys" -- Chileans trained at the University of Chicago in Milton Friedman's vision of economics. The post-Pinochet governments have done little to change that system. They have seen university as little more than an opportunity for students' personal advancement. Students should therefore be prepared to invest in themselves.

Many students disagreed, and not just because they wanted cheaper tuition. They actually saw themselves as potential contributors to a better, fairer Chilean society. And their leader was a then 23-year-old geography major who happened to be a dedicated member of the Young Communists of Chile.

While Pinochet had killed or exiled most Chilean Communists after 1973, the family of Camila Vallejo somehow escaped notice. Her parents, longtime Communist Party members, now run a small air-conditioning business. They found the money to send their daughter to the University of Chile, where she became only the second woman in a century to become president of the student union. She also became the leader of the student protests -- and a challenge to the way politics have always been done in Latin America.

Half a million in the streets

The first protest took place on April 28, 2011 -- Vallejo's 23rd birthday. Just 7,000 students and professors marched through the streets of Santiago. But Vallejo and her comrades turned out to be brilliant organizers. The marches swelled until up to half a million students, professors and parents were in the streets at one time.

So were the Carabineros, riot cops in full gear. Some marches turned violent thanks to thugs called "descapuchados" (hoodies), giving the Carabineros a pretext to use water cannons and truncheons to clear the streets.

That only boosted support for the students, who anticipated the Occupy movement by "tomas" -- peacefully taking over their schools and campuses for months at a time.

Through it all, Vallejo has been the focus of attention. Both her ideas and her looks transfix supporters and adversaries alike. She is a proud and unrepentant Red, writing long discourses on her blog. She has also published a book, We Can Change the World, based on her speeches and articles. Vallejo's frank radicalism appeals to millions of Chileans (and other Latin Americans) who have witnessed endless meddling by the CIA in their national affairs.

She also scares the hell out of right-wingers. One female civil servant, a veteran of the Pinochet years, cited the general's famous saying: "Kill the bitch and you get rid of the litter." That remark cost her her job (and got Vallejo police protection).

Compounding the issue is Vallejo's beauty, which in itself has made her a celebrity. Her enemies in the government have been reduced to sputtering about how she ought to be marching on a catwalk, not in the streets. But in a political culture soaked in machismo, Vallejo poses a challenge: Who is man enough to deal with her? Certainly no one in the Piñera government, which has burned through three education ministers in the past year. (Her poll numbers are triple Piñera's.)

Machismo also has problems with Vallejo's poise and cool, quick intelligence. The politicians don't intimidate her. She can stand up in front of a crowd of scores of thousands and explain why they need free, quality education. She's equally serene on TV with interviewers who range from the hostile to the obviously smitten. Latin America's young women have never had such a role model.

Camila Vallejo and her comrades have remarkable media skills. They market themselves as "Alegre Rebeldía" -- the Happy Rebellion. They thrive in front of the TV cameras, but they also make their own videos and use social media to set the agenda of the mainstream media. On Twitter, Vallejo had almost 450,000 followers in late April -- up from 300,000 last October. Those who tweet about her range from the admiring to the sneering -- but they are all engaged with her, whether to praise or condemn.

As a master of agitprop, Vallejo understands that students alone make a dubious revolutionary class. So she has carefully sought allies, supporting a protest movement against a new dam in the southern Aysén region, and the copper miners of the far north. And she has consistently argued for free quality education as the means to a social transformation of Chile -- a Chile in which students will apply their skills to improve their country, not just their own incomes.

What lessons can Quebec students draw from Chile? First, they have to re-frame the debate. A cheaper ticket to personal prosperity will impress no one. Free education as the highway to a more equal and prosperous Quebec would be far easier to sell, and the CLASSE student group has already made this argument.

Second, they need a leader who can attract and dominate both the mainstream and the social media. It doesn't have to be a beautiful woman, but a spokesperson who can explain the students' position clearly and calmly -- whether on TV, in print or in 140 characters.

Third, they need to drive hard bargains. Charest's offer of spreading the tuition increases over seven years instead of five was like the deal the Piñera government offered -- and which Chilean students turned down.

Fourth, Quebec students need to understand that the only way they'll succeed is to help their allies succeed too. That means building alliances with students across Canada -- who have already run up over $14 billion in debt -- and with other groups as well: unions, immigrants, First Nations, young families.

That may also mean going into the streets, getting tear-gassed and clubbed, and coming back for more -- maybe for years. If Quebec (and Canadian) students know what they're fighting for, they'll do it at whatever cost.

If they don't know, or they're fighting only for themselves, they shouldn't even bother.