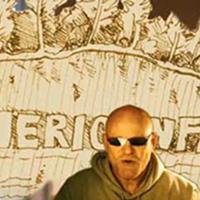 It's tempting to denounce this essential one-sidedness as the tragic flaw in our culture. But that's also where the magic lies.

We shouldn't conflate Nietzsche's Zarathustra with the historical/mythical one, but it might be no coincidence that Thus Spake Zarathustra opens with the death of a tightrope walker. It's as if Nietzsche is saying the Eastern method of balancing opposites is defunct. Time to try something new: imbalance.

And the experiment has already succeeded. Locking the irrational in a box has transformed the human world. Homicide rates -- men killing other men -- dropped to less than 5 percent of pre-industrial levels by the 20th century -- and that includes both World Wars, plus all the gun deaths in America. It's our perception that creates the "reality" of a violent modern world. (Steven Pinker gives an excellent summary of this decline here).

The million dollar question: has suppressing the irrational set us up for a gigantic reversal, where all those saved by the Age of Reason will be destroyed at once by a scientifically created, irrationally-powered backlash, such as global warming? We have already seen such a reversal of fortune (pun intended) of the wealth created since the Reagan revolution, which turned out to be only on paper. And in the States, for example, Sarah Palin seems to represent the rise of a certain irrational global-warming-as-myth element.

But my hunch is that if this irrational retribution were in the cards, it would have happened back in the '80s when the world was on a hair trigger and there seemed no way out. I honestly believed we were all doomed. I felt it in my heart. But my heart was wrong.

As someone once said, "Fool me once, shame on you. Fool me twice... um...can't get fooled again."

The genius of New York is that it contains all cities, like a Calvino story. The sheer wattage of the billboards in Time Square recalls Tokyo; downtown captures Paris; the East Side reminded me of Shanghai; and midtown, with its Art Deco buildings and broken pavement, took me back to the first great city in my life, Glasgow.

Except by some magic the city was gigantic again, like when I was a kid, a dream of that first city: Superman's old neighbourhood, open all night; deserted delis with steam tables piled high with shrimp and pork, like the enchanted banquets of Narnia; yellow slabs of light falling from improbably tall, thin doorways; steeples, railings, window ledges you could actually leap from, pigeons aflutter in granite canyons, sooty gargoyles, steeples, chocolate sky.

The subway was not a tube but a forest of iron girders. Cupping my hand against a window, I saw cyclopic headlamps of other trains rattling through the dark. Steam rose up through the pavements in striped funnels, like an ocean liner.

Yellow cabs honked like geese through bulrush legs. Every man/woman for themselves. The Public Library gave me a membership, no questions asked. It stood at the top of a hill that was once the summit of a heavily-wooded island, so that if you looked down the streets in any direction you saw blue sky, like the streets of heaven. A brick wall near Macy's stretched up vertiginously, dotted with air conditioners that seemed bound to come crashing down at some point.

The observation deck at the Empire State was so high up it seemed impossible that it was connected to the earth, more like the deck of an airship that in one possible future was to be tethered from the great mooring mast at the top.

And yet the Twin Towers had soared three hundred feet higher still. Nothing there remained except a hole and a chain link fence, and two women who clutched each other weeping while an old black man with a sign that said VETERAN played "Amazing Grace" on a recorder.

September the 11th is etched in our collective memory as the day Islam hammered on the gates of the West, and was rebuffed. I'm talking about September 11th, 1683, and the Battle of Vienna.

If you look on a topographical map you can see that Vienna sits at the mouth of the only valley that leads from Asia Minor into Europe, and so it was here that the Ottoman Empire amassed its armies in the fall of 1683.

The two great powers of Christendom, France and Germany, were busy bickering among themselves, and so they left this back door open. According to legend, the early-rising bakers of Vienna heard sappers tunneling under the walls and narrowly averted a plot to bring them crashing down. The single day bought by foiling this bomb plot gave the Polish Hussars time to sweep down from the north and rout the Turks. Christendom was saved.

Legend has it the Viennese bakers later invented the croissant to commemorate their part in the victory. It's no coincidence that this tasty snack is shaped like the crescent of Islam. Each time you eat one you are symbolically taking a bite out of Mohammad.

Even though the croissant is all we collectively recall about the original September 11th, the story of its origin was probably invented after the fact to sell pastries. But the geopolitical ramifications of the siege of Vienna are still with us. Islam, rebuffed, collapsed back upon itself and did not regain prominent footing on the world stage until September 11th, 2001.

And it's not so much that we forgot everything about Round One except the croissant (who could keep track of all these details when rent is due), it's that we see time as an arrow, and whenever the wheel rolls around we are astonished and unprepared.

This is not the case with China.

And that's the story of how I won my war on terror, and also the peace. Thanks for participating in the experiment. It has been a strange experience, making a personal film in public. A little like being turned inside out over a period of months. Like most experimentS, it's all been about observation. Unlike most experiments, in this one subject and object observed each other. I will get back to you with the results.

My thanks to the B.C. Arts Council, who got the ball rolling, Rogers Mobile Fund for kicking it back to me, and The Tyee, for their courage in trying something completely different.

We now return to our regular programming...