In the fall of 2006, Andrew Struthers was introduced to something new on the Internet, YouTube, by his daughter's boyfriend. "When he showed me how it worked I thought, 'Wow, that's really interesting.'" 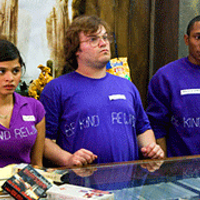 In January of 2007, Struthers posted his own little video, a take-off on Hinterland's Who's Who called Spiders on Drugs. It immediately shot to number one, getting a million views the first week, in a YouTube universe that had exploded in just a year's time. Struthers is now a YouTube fixture. His Spiders video, with 21 million views and still rising, is permanently enshrined on YouTube's "Most Viewed of All Time" page.

And now he is about to make some more YouTube history, in partnership with The Tyee.

SEE EPISODE ONE OF 'AMERICANFACE'

Struthers has created a feature-length film called Americanface that is broken up into 64 YouTube clips of 90 seconds, each of them designed to work on their own as a discrete episode. The first clip of the series launches today on The Tyee. View it here. The next three run daily Tuesday through Thursday. On Friday all four episodes are joined into a single, longer clip -- a weekly six-minute bite if that's how you prefer to keep up with the story.

That's how all of Americanface will unspool on The Tyee in the weeks to come. Single episodes Monday through Friday, all four of those merged and run again Friday.

What is Americanface about? It revolves around Struthers' own funny, first-person recounting of a pilgrimage made to Tibet by mistake during the Reagan era. "It was actually illegal for me to be there. There were no tourists. You couldn't even buy food." That alone makes for a great yarn, filmed as monologue in the vein of Spalding Gray's Swimming to Cambodia. But Struthers (who is based in Victoria, British Columbia, and has lived in Uganda and Scotland but never in America) has crafted his reminiscences of the 1980s to work as allegories for global politics today.

In astrophysics (which Struthers studied at UVic) "there is this thing called the averted eye trick," he says. "If you look right at something it falls into your blind spot. So you need to look a bit to one side or the other to perceive the truth. There are numerous instances in the piece when I'm talking about a historical incident but it's really about something happening now. I'm constantly telling a story that could apply to two completely different historical events. For example, Vietnam and Afghanistan."

Struthers sees history as cyclical and is both amused and appalled that Americans (with Canadians often allied) keep blundering into quagmires that should look familiar, then they seem surprised when the best laid plans go awry. "As I age, gracefully," says the self-described "planet baby" who is 48 years old, "it is disheartening to see people have completely forgotten what we went through only 20 years ago."

Struthers tries to make sense of it all by reading Derrida, Zizek and other postmodern philosophers. Luckily, he also has a hell of an ironic sense of humour, which converted comedians like Rick Mercer and Will Farrell into outspoken fans after Spiders on Drugs went viral.

Suddenly on the A-list's speed dials

The year of the Spider was a weird one for Struthers, as MTV, the Comedy Channel and others began offering him paying projects. "This was overnight fame, but really turbocharged." There were no intermediaries between the new guy and the fame machine. "No publicity, no agents. Just me at home with my home computer. Suddenly I'm getting calls from everybody. The biggest surprise was Quincy Jones. I answer the phone and hear, "My name's Quincy Jones, I'm a music producer.' 'Yeah, I know that.' What are you going to do?"

Having grown accustomed to the writer's life of genteel poverty, Struthers now had money coming in, some of which he used to equip his own film production studio. That allowed him to imagine the ultimate do-it-yourself film project. He would be writer, director and main actor, using one camera, one lighting setup, and spending zero on production. That meant he had to make all the props out of stuff he had lying around the house.

The early days of trying to conceive a 64-part movie well adapted to YouTube and also theatres were self-inflicted torture, Struthers recalls. "This was a crushing challenge as a writer. Overwhelming. There were about six weeks when I just sat unshaven at the local coffee shop and stared at the trees and said, 'Well, you really did it this time, Struthers. This is like breaking your leg high up on Everest. There's no way out.'"

The doubts compounded. "I worried about the shape of my head. I mean, are people going to put up with that for 90 minutes?"

Gradually, though, the ideas and words and scenes began to come and Struthers began to think he might be pioneering a new kind of creative approach that "was sort of like a bridge between filmmaking and novel writing."

"It was a very enjoyable process, with none of the usual film world frustrations. Mainstream filmmaking is really more about creative damage control. Really great filmmakers are able to take a disastrous filmmaking situation and turn it into gold. It doesn't always work out that way. They spend $50 million, but it's just dull. Why? Well, it didn't start out dull, but big films have so many moving parts."

By stripping the creative team down to just one, himself, Struthers was able to take the time to "struggle with myself. Is this honest? Real? Is it working? Those things get put on a back burner when you are in a room with 50 people and burning through 100,000 dollars an hour shooting a Hollywood movie."

As a result, every 90-second installment of Americanface has been rewritten, reshot and re-edited about 20 times, Struthers says -- the luxury an author might have, but not a director.

Adding another wrinkle to the experiment, Americanface is also being made available for mobile devices by Rogers wireless. Knowing that would be the case, Struthers needed to design his film so that it could play on a screen two inches or 15 metres across.

Struthers, who gives very few interviews and asks that few details of Americanface's story be revealed here, says his film is a creature of the era of YouTube and Bittorrent downloads, which has completely changed our expectations about how we will experience video media. Younger people, he says, take for granted that YouTube is like a "library of Alexandria" allowing them to rummage and find everything from early anime cartoons to World War II propaganda reels to the latest episode of Ugly Betty.

There was a time when you needed to make an appointment with a television program, submitting to the provider's demands that you watch it on a certain night, at a certain time, chopped up into bits between commercial pitches, then waiting another week for the narrative and emotional arc to advance. Now you can gorge yourself on 10 Sopranos episodes in a row, which, as Struthers points out, can cause you to feel the artistic creation in a much more profound and even disturbing or exhilarating way than if imbibed a little at a time over many months.

Americanface reflects these new expectations by giving the viewer many ways to experience the story, placing you in control. You may watch a bit at a time daily, a bit more at a time on a weekly basis, or the entire story all at once, after all of it has been told. And if you miss a number of clips, they will be stored and easily found on The Tyee, making it easy to catch up.

There is a saying that a work of art is only as good as its audience. Struthers says he chose to showcase his experimental work on The Tyee because he has come to recognize this as a place where creative people can express themselves with far fewer restrictions than in commercial media. That aspect to The Tyee, he says, attracts an audience he believes will engage with, understand, and enjoy his exploration of a new artistic form.