After the riot at the Jokhang, all the adventure-tourist types lay low and planned their escapes onto the plateau. There was no transportation at all outside of Lhasa except for a single bus to Shigatse every 10 or 12 days -- but no one was allowed on it except Tibetans, and also Bruce, who still had his official travel documents.

I saw him off at the bus station. While we waited I drew the station -- a generic cement building, but a drawing none the less. Bruce was livid. "If I could draw, I wouldn't waste my talent on something as ugly as that!"

I agreed. It was a crazy thing to do, but I explained that my goal in life was to find the sweet spot between sanity and insanity, and broker a lasting peace, lest my disowned Irrational attack me from behind.

That made Bruce even angrier. He was Mr. Rational, and he considered such ideas seditious, possibly even dangerous. He sat and fumed until he nodded off, and woke with a scream from a nightmare where his mom was beating him up. "Oh God," he moaned, "It was terrifying." Then he climbed onto the bus and his outback hat disappeared into the throng.

Marc, Damien and Marc II hired a guy with a yak and vanished into the hills, and the rest of the Snowlands crew tried to reach Kailash, the Holy Mountain, in a high-axle bus, but got nabbed just west of Tingri and dispatched south to the Nepalese border.

Tibetan tourism was still fresh as a country pancake, quasi-legal, and largely improvised. You could smoke pot openly without fearing rebuke. It grew at the side of the road, and the Chinese authorities called it "local tobacco...which the grinning natives love to smoke."

The best place to eat was a mud barracks with the word MANBURGERS daubed on the side in roof-high blue letters. I assumed they meant hamburgers, but it turned out they were selling yak meat served with fried bread. They were so tasty I ate two, then I had to lie down on the rough wooden bench and groan.

The MANBURGERS toilet was a slot that opened into an alleyway full of dogs, who gobbled up your shit before you were even done with it, then loped across the street to the meat market and nipped at slabs of fresh yak that lay in pools of blood on the great stone butcher block. The only reason anyone survived is that even microbes perish at that altitude. Nothing thrives except yaks, religious mania, and the legions of dogs.

The temples were lousy with them. Dozens lay in alleys between monastery walls, and marauded in the hills. Some said they were the reincarnations of failed monks, and were loath to chase them away in case they were old friends who were trying to hear the sutras again, so that they could reincarnate as humans and give Buddhahood another shot.

I would say that once you're down to eating tourist shit in a back alley, reaching Buddhahood might take more than a bit of chanting.

There was nothing to eat on the plateau except roadside greens, truckers' biscuits prosaically named "721," and tsampa -- a porridge made from winter barley slathered with rancid yak butter. The entire diet seemed geared towards stanching the loss of fluids through evaporation. You can lose five litres of fluids a day, unless you clog your pores with tsampa.

One afternoon while eating tsampa at a roadside stall I drew some nomads in their tent: 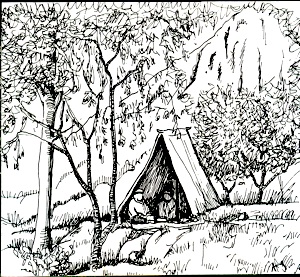 After a while, they came outside and looked at the drawing, chuckled, and brought me some tea and a special treat: a beat-up boom box. The batteries were so precious that they stored them separately, wrapped in an oily rag. They inserted an ancient, stretched tape that lunged as it played, but through the distortion I could hear Samantha Fox singing

Touch me! Touch me!
I wanna feel your body!
Your heart beat next to mine!

Turns out Rongbuk Monastery is not the highest ruin in the world. That title goes to the demolished nunnery that lies a little further up the hill. Damn chopsticks.

The temple proper had been ransacked by peasants from the valley below, who were informed during the Cultural Revolution that they were being oppressed. After the smashing, a handful of monks who had hidden in a cave sneaked back and started to rebuild.

But it was still a desolate place. The monks had bad head colds and runny noses and looked more whacked out than tuned in. One big filthy junior monk around 16 kept sticking his hand into the boiling tea kettle, hoping to startle me. Mostly I was concerned about the tea.

The only place to sleep was a stone bunk in a stone cell. The walls were stone, and even the ceiling comprised lanky wooden beams with flagstones laid across them. Lying under this setup the first night, I remembered a story I'd heard down in Lhasa about the Twelfth Dalai. Rumor has it, he died when the head of the government pulled a lever, and large rocks that had been propped up over his bed his whole young life fell on him, crushing him flat.

The temperature dipped to 20 below. The little yak dung stove guttered. I lay shivering on my bunk and wondered how I had confused this place with the temple in my dream.