The unplugging of broadcaster Russia Today in Canada can’t happen too soon. RT has already contributed greatly to the buildup of disinformation poisons in our body politic.

The cumulative effect of fake news and paranoid obsessions is reaching dangerously toxic levels, as we saw during the recent ugly occupation of Ottawa.

While most Canadians were revulsed by this national eruption of bozos, we must also honestly ask why so many of our fellow citizens have willingly become radicalized, ready now to sweep aside science, elected governments and the rule of law to recreate a fantasy world within their Facebook feeds.

How did shared rational truth become unpalatable to so many people?

Putin played his part. Canada is increasingly a target of Russian misinformation efforts to undermine and divide democracy around the world. His weapons included false social media accounts, shadowy bots and, right out in the open, RT.

Is it mere coincidence that the anti-mandate occupation of Ottawa and U.S. border blockades occurred on the eve of Putin’s planned invasion? Bessma Momani, a political science professor at the University of Waterloo and a senior fellow at the Centre for International Governance Innovation, is not so sure.

“If [Putin’s government] were not patient zero behind this, they certainly helped add oxygen because the timing was appropriate for them,” she told the Canadian Press. “It's going to be hard to pinpoint it, to completely say it's all Russian intervention, but I have absolutely no doubt that they have their hand in this in some way."

This much we know. As documented by Andrew Nikiforuk, the trucker occupation of Ottawa was highlighted in some 1,200 stories on state-sponsored Russia Today — more than any other global media outlet.

So what is at stake and what are we going to do about it?

Experts have long warned about an ongoing information assault on Canadian society by a hostile foreign actor, but few beyond some policy wonks seemed overly concerned.

Many citizens of Ukraine were likewise skeptical that their country was in danger of full-scale invasion until columns of Russian armour started pouring across the border. The world is rightly inspired by the courageous resistance of the Ukrainian people. Many Canadians and our elected governments are doing what they can to assist the government of President Volodymyr Zelenskyy.

However, we should remember that Canada is also an important front in Vladimir Putin’s war on western democracies and has been for years.

Putin’s regime excels at the long game of sowing division within complacent democracies — democracies that are only now waking up to the ongoing threat.

Canadian Heritage Minister Pablo Rodriguez recently described RT as “the propaganda arm of Putin's regime that spreads disinformation,” adding that the broadcaster “has no place here.”

Yet RT has been on-air in Canada since 2009. Over four years ago, it was revealed to be paying Canadian carriers to distribute its propaganda to more than half of Canada’s 11.1 million cable subscribers. The amounts of these payments are not publicly known, and broadcasters are somehow not required to provide documentation of these dubious arrangements to the Canadian Radio-television and Telecommunications Commission, more commonly known as the CRTC.

The federal government has belatedly directed the CRTC to review whether RT should be purged from Canadian cable distribution. In the meantime, Canadian cable companies have voluntarily cuts ties with RT in the wake of ensuing outrage from their customers — a corporate decision that in theory could be reversed at any time.

Across the Atlantic there have been far bolder policy moves to limit Putin’s ongoing information war. “The state-owned Russia Today and Sputnik, as well as their subsidiaries, will no longer be able to spread their lies to justify Putin’s war and to sow division in our union,” European Commission president Ursula von der Leyen announced last week. “We are developing tools to ban their toxic and harmful disinformation in Europe.”

Russia’s misinformation efforts to undermine democracies dates back decades. The former KGB devoted comparatively few resources to actual spying — more than 80 per cent of their budget and 15,000 staff were earmarked to create contagious conspiracies for western consumption. Agents were required to spend a quarter of their time fomenting bogus news stories such as the widely believed hoax that the U.S. government created HIV in a lab in order to target American gay and black communities.

Putin has vastly scaled up these efforts in the last 20 years, exploiting the greed and reach of social media platforms like Facebook, which have regularly been revealed to be cravenly focused on revenues rather than the truth. 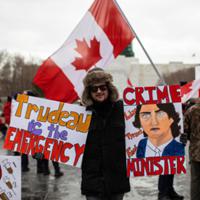 Where Do We Go from Here?

Unsurprisingly, online anti-vax groups are now being repurposed in support of Putin’s invasion of Ukraine. Some supporters (and bots) of the anti-mandate trucker convoys now posit that the U.S. has secret biolabs in Ukraine and Putin is actually on a righteous crusade against the deep state and George Soros. Who knew?

If the world has any chance of meeting our many challenges in the coming decades, it is vital that we share a basic concept of reality. Ottawa must do much more to combat malicious misinformation, not just from Russia but other hostile regimes as well. Citizens should also be mindful that our brains have become a geopolitical battleground and question whether we have unwittingly become part of someone else’s agenda. If the anti-mandate occupiers are looking for some grand global conspiracy, it might be closer than they think.

And if the awful invasion in Ukraine eventually ends the reign of Putin, one of the many positives for the world would be the final silencing of his mighty misinformation machine.