A weak leader and ineffectual campaign will take much of the blame for the BC Liberals’ spectacular collapse. But the election results reveal the party’s serious long-term challenges that threaten its hopes of returning to power.

The united centre-right vote has traditionally been enough to deliver power, first to Social Credit and then the Liberals. The NDP only had a chance when there was a split — when, for example, Reform and Gordon Wilson’s group of breakaway Liberals split the vote in 1996.

That reflects changes in the province’s population and the Liberals’ campaigns. This time, they failed to offer a reason for people to vote for the party. The key promise to eliminate the provincial sales tax for a year was ignored by voters who knew a con when they saw one.

In part because they had seen this kind of behaviour by the Liberals before. Seven years ago, then leader Christy Clark claimed LNG projects would produce a magic transformation of the provincial economy. “It’s no fantasy,” the Liberal platform said in 2013. “We can create $1 trillion in economic activity and create the BC Prosperity Fund with $100 billion over 30 years.”

But it was a fantasy. One LNG plant is being built. There’s no prosperity fund.

And when the Liberals didn’t win enough seats to form a majority government after the last election, they crafted a throne speech that effectively adopted the NDP platform and showed the Liberals had no principles or purposes beyond getting elected.

But even without those kinds of campaign failures, a bigger shift is under way. The Liberals’ goal has been to keep the non-NDP voters together in a “big tent” that housed everyone from Vancouver real estate players to social conservatives to northern resource workers, and to be all things to all voters to the right of the New Democrats.

That meant keeping candidates like Chilliwack-Kent MLA Laurie Throness despite his conservative Christian views that were intolerant and intolerable to many Liberals. (Wilkinson pushed Throness out barely a week before the election; the results so far show the NDP is likely to take the seat.)

The Liberals do need to clean house, starting with a new leader.

But its problems are more fundamental, and existential. Uniting voters to the right of the NDP is no longer enough to win elections. In fact, the effort is alienating many voters.

The Liberals need to re-invent themselves to reflect the new reality — a task that will be harder given a caucus dominated by white males.

John Horgan’s decision to call the election obviously worked. The NDP captured 45 per cent of the popular vote in the first round of results, the second best result in its history. (Though once again a party has won absolute power for four years without the support of most voters.)

But the new government faces a slew of daunting challenges. Horgan managed to push the Site C fiasco off until after the election, but a decision will have to be made soon on the over-budget, problem-plagued megaproject. The pandemic is still with the province and will be for the foreseeable future. At some point the government will have to begin chipping away at the massive deficits created by pandemic relief programs. And the economy’s woes are not going away quickly.

Despite being stabbed in the back by Horgan — or the front if you believe the Greens should have seen the betrayal coming — Sonia Furstenau had a great night, especially since she only had a week as leader before the election was called.

The Greens are on track to win three seats, although mail ballots are still to be counted. That’s despite the loss of former leader Andrew Weaver’s Oak Bay-Gordon Head riding to NDP candidate Murray Rankin, a former MP. That gives them official party status, which brings extra funding and places on legislature committees. 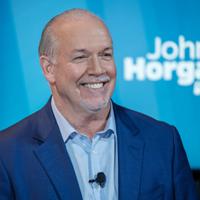 And the Greens look to be on track to reach at least 16 per cent of the popular vote.

That too is a big deal. I’d guess when all the ballots are counted the Greens will have won the support of some 240,000 voters.

The parties get public funding, currently set at $1.75 per vote for parties that demonstrate minimum levels of support. The Greens would receive $420,000 in 2022, critical for a party with less fundraising capacity than its rivals. (The subsidy is to be reviewed by a legislative committee next year to see if it should be continued.)

The Greens survived. And for the next four years — or until Horgan calls another snap election — they can carve out a place as the only party that differs from the Liberals and NDP on big issues like Site C, LNG and climate change.