A controversy erupts out of nowhere, your veteran candidate caught smearing an opponent — and doing so in ways that merely throw her own character into doubt. Not just hers, in fact, but the character of the party she represents, because eight colleagues, including the party leader, looked on and laughed as she made her degrading “jokes.”

That’s what went down Saturday and Sunday on social media, after a video of a Zoom gathering of BC Liberals to “roast” outgoing MLA Ralph Sultan was leaked. MLA Jane Thornthwaite thought it would be entertaining to falsely claim Bowinn Ma, the province’s youngest MLA, “cuddled” up to Sultan on a couch at a public meeting. And that Sultan can’t think straight around Ma, “who is a very pretty lady” who “knows that she’s got it. And she knows how to get Ralph going.”

It was clearly sexist. Justifiably perceived as racist, too.

you KNOW that thornthewaite would never talk about another white woman that way !

i know bc women of colour are sexualized in ways that white women are not, and that particular way she played into stereotypes about young asian women seducing old white men was visceral to me.

And so after podcast host Mo Amir shared the video — obtained, he says, from an offended BC Liberal — outrage erupted. Which posed a crucial test for the party leadership and their spinners. Could they quickly and convincingly apologize, making it clear they understand why such objectifying talk is harmful and wrong?

No, they couldn’t. Instead, they provided a textbook example of how to further tarnish your party’s reputation rather than repair it. But they did provide lessons. Here are six ways BC Liberals and their friends made a public relations crisis worse by failing to get right their responses.

Thornthwaite’s first attempt to put out the fire was to defend her remarks, patting herself on the back for her own accomplishments. But she neglected to express any remorse for tearing down another female politician, much less demonstrate she understood why her stereotypes were harmful.

I have huge respect for all women who push through glass ceilings. I’m one of them. So is Bowinn Ma. Ralph Sultan has the same respect and a soft spot for his fellow UBC engineer, and I made light of that at a roast. I have always and will always support more women in politics.

Only after Thornthwaite continued to be pummeled online did she, an hour later, issue a formal apology to Ma which by then had to feel begrudging and coached.

Party leader Andrew Wilkinson is seen laughing at Thornthwaite’s comments on the video. As of noon on Monday, his sole statements on the affair are these two tweets:

I understand why many people are upset, and I continue to be committed to doing everything I can to make sure women are welcomed, encouraged, and treated with respect in politics and public life. 2/2

Was he even there? You wouldn’t know it. Using the passive voice (“this never should have happened”), he fails to take any responsibility by acknowledging he had the power to step in and shut it down but didn’t.

We’re also left to wonder why it is merely “on reflection” that Wilkinson understands what was so “inappropriate.” Does he only get it now? In which case he’s saying his ethical navigation system was dead — until this forced reboot. Yet, impossibly, he assures he’s the soul of consistency. “I continue to be committed to doing everything I can…”

Confused rather than reassured? Vague apologies have that effect.

Apology does not answer the problem. Yes it should have never happened. True amends comes from identifying why it happened and demonstrating that changes have been made to the cause not just the consequence. Until then - there can be no trust that anything has been learned.

3. Blaming the revelation on cynical tacticians.

From the get-go, BC Liberal spokesperson Brad Zubyk was very present on Twitter, trying various thrusts and parries in response to the building anger. On Saturday night he implied Amir was a tool of the NDP, serving his master by releasing the video. “Hey Mo, you may want to check to with Elections BC. This sort of manufactured nonsense may qualify as an NDP election expense. Have a nice night.”

Zubyk moved on to planting the idea that the NDP was behind it all because it was losing voter support. “Nothing like a late night Saturday attack during a long weekend to show confidence.”

My guess is that this means the polls are tightening #bcpoli https://t.co/uD9dQk7JSS

The problem with such responses is simple. They drip with contempt for anyone who sees deeper principles at stake than mere gamesmanship. Next up, a corollary…

4. Waving away ‘identity politics’ as not real politics.

Zubyk and Spector weren’t done dismissing the frustration expressed by women who have experienced sexism and racism. They went on to delegitimize anyone who believes political parties — and elections — should address discrimination based on gender or race or sexual orientation.

Being upset about the Zoom roast was just “virtue signalling,” said Zubyk, and more “identity politics,” said Spector. Not actual, worthwhile political concerns in the views of these hardboiled pragmatists (who happen to be well-off white males).

In case anyone offended somehow missed how thoroughly their views were being dismissed, BC Liberal hire Zubyk fixed that by saying he preferred to “discuss issues” instead of “nothing burgers” kicked out by “the usual suspects.”

Anyone who spends time on social media or listening to political adversaries knock heads on cable TV is all too familiar with this rhetorical device, and out it came after the Zoom roast caught fire.

Agree, it is a real problem. I heard that there was a woman that wanted to run in #stikine in a seat saved for members of an equity-seeking group and they went with a middle-aged white guy instead. #BCPoli https://t.co/aXDdFgV16R

Such spin is always directed at scoring points with the base rather than expanding it, and to the unconverted it usually comes off as bad faith and defensive. When it’s tried, the symmetry of examples rarely holds up under scrutiny. Take the tweet above by Mike Witherly, a political comms pro. The BC Liberals don’t even have a gender equity policy for their candidate roster, so who’s throwing stones?

And once the what-aboutism gets going, it’s hard to keep to your advantage, since two sides can play that game endlessly.

Forget Wilkinson and Thornthwaite. The last time these clowns came to power, they tore up labour contracts despite an explicit promise not to do so. Affected? Two unions whose membership was over 80% female. Thousands laid off. #bcpoli #BCelxn2020 #DayOfTheGirl 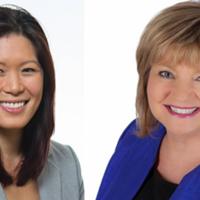 Among high-profile BC Liberal candidates, the response so far has been pretty much crickets. Karin Kirkpatrick, the party’s candidate to replace Sultan in West Vancouver-Capilano was the only other woman on the Zoom roast call. She has posted nothing relevant on her Twitter account.

All quiet on the Twitter front, too, from Jordan Sturdy, who was on the call and seen laughing, and is running to retain his West Vancouver Sea-to-Sky seat. Nothing either from Mike de Jong, also a beaming face on the call, who is running again in Abbotsford West.

Other BC Liberals have posted Wilkinson’s two apologetic tweets and left it at that.

By contrast, Mary Polak, the multi-term MLA from Langley, not only retweeted Wilkinson’s words, but also the shrugging takes of Zubyk, Spector and Witherly. She has directed zero comment to Ma, or offered her own views, of any kind, about the Zoom roast.

As of Monday morning, the Globe and Mail’s Ian Bailey had learned from Ma that no one other than Thornthwaite from the BC Liberals had “reached out.”