Books on current politics published between elections are likely to have a short life expectancy. Justin Trudeau’s Common Ground came out a year before the 2015 election and now ranks #23,168 on amazon.ca.

Aaron Wherry’s new book, published on Aug. 20, ranks #987. Depending on the outcome of the Oct. 21 election, it will become either a standard reference for pundits (and springboard for a sequel), or an extended footnote about a one-term wonder.

Of course, such books are hazardous for author and subject alike. The author risks gaining a reputation as a mere partisan flack, especially if the treatment is sympathetic. (Or, if it’s less so, the author is accused of doing a partisan hatchet job.) The politician risks saying too much, or too little, about sensitive subjects, or reminding voters of embarrassments best forgotten.

Even if almost no voters actually read the book, however, its existence is a useful part of the campaign: it’s the basis of news stories, reviews like this one, televised author interviews and social-media tweet storms.

Another hazard is that the book may become dated by events between completion and publication. The speed of modern publication reduces this risk, but not to zero.

Aaron Wherry, the CBC’s Parliament Hill reporter, has clearly designed this book with all these factors in mind. His style is carefully neutral; he’s an old pro who’s heard too many talking points too many times to be impressed or annoyed by them. (But I recall the anguished boredom on his face at a 2011 Liberal rally in North Vancouver, when Michael Ignatieff was trying “Rise up, Canada” as a gimmick to revive his dying campaign.) 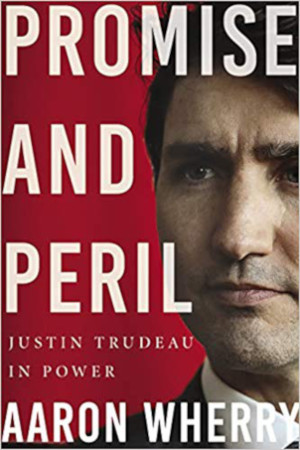 His neutrality got him access to Trudeau for extended interviews, in which the prime minister was fairly forthcoming. He also interviewed many others, not all Liberal insiders, who could offer insights into the past four years. Wherry then built the book around a series of chapters on specific issues — climate, conflict of interest, Trump, foreign relations — leading up to the climactic confrontation with Trudeau’s erstwhile justice minister, Jody Wilson-Raybould.

Taken individually, each chapter provides a concise summary of some complicated events as seen chiefly by Trudeau and his staffers. This serves both to remind us of issues we’ve half-forgotten, and to see them as unified narratives rather than as a series of fragmentary daily updates. Wherry uses them to reveal aspects of Trudeau’s character, such as his ability to talk effectively to ordinary Canadians while remaining one of the most privileged Canadians in history.

Trudeau himself seems aware of this, especially when the Conservatives — great supporters of corporate wealth — make political hay out of his vacation with the Aga Khan and his being “out of touch” with the voters. But he is far from the patrician his father was. In interviews with Wherry, Trudeau sometimes sounds like a Valley Girl who’s taken an upper-division political science course. He describes confirming Donald Trump’s election on his phone at 2 a.m. and thinking: “It was like, OK, this is going to be an interesting challenge.” Meanwhile, he’s trying to prevent the Conservatives from creating a “counter-narrative” about his policies and actions.

But attacks on his status and his way of speaking reflect the populist miasma in which we conduct modern politics. In 1968, a Canadian journalist gushed that Pierre Trudeau made everyone else sound like a barbarian in either French or English. But no one suggested he’d be a good guy to have a beer with. Canadians elected him (and hated him) because he was clearly superior to everyone else.

Canucks fans wouldn’t want a goalie who was no better than they were, but many Canadians, like Americans, have fallen for the ordinary-guy myth — that the “elite” are out of touch, but incompetent jerks will look after us. Justin Trudeau, having grown up in the public eye since birth, is a popular brand. But he’s also vulnerable because he’s clearly not an incompetent jerk.

That said, Trudeau has still lurched through some awkward moments since 2015: reneging on a new electoral system, pretending that selling more bitumen could help the climate crisis, swanning about India in “fancy dress.” He has seemed to be too eager to please too many people and ended up pleasing very few.

The awkwardness was especially apparent this year in his clash with Wilson-Raybould. She had seemed a star in his cabinet, reflecting the importance to Trudeau of both women and Indigenous peoples. Instead she became his nemesis, the cause of “the most damaging crisis to confront the Trudeau government.” 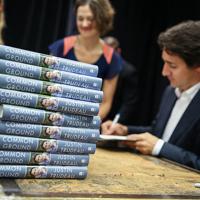 Wherry does a good job of reporting the crisis, interviewing both Trudeau and Wilson-Raybould as well as their backers. Yet it adds little new to the countless stories we’ve read since last winter; it remains a he-said-she-said account.

But implicit in Wherry’s account is the defeat of Trudeau and his Liberal government. Part of it is in the prompt and vicious whispering campaign that tried to discredit Wilson-Raybould. And sometimes it wasn’t just a whisper. Veteran Liberals went on CBC Radio to demand she “put up or shut up.” Such attacks, and Trudeau’s mendacious denial of the original Robert Fife story in the Globe and Mail, made the government look like cads in good suits.

Worse yet was a kind of collective ignorance in Trudeau and his government about their key difference with Wilson-Raybould: a very clear point of law. SNC-Lavalin was in a heap of legal trouble over corrupt practices in their dealing with the late Libyan dictator Muammar Gaddafi. The Liberals had brought in a law that would give SNC-Lavalin a slap on the wrist while allowing it to bid on future Canadian government contracts, and thereby protect some number of Quebec jobs.

But SNC-Lavalin still didn’t meet the requirements for a get-out-of-jail-free card. Wilson-Raybould understood that, but Trudeau and his staff simply didn’t get it. For some reason, protecting an unknown number of Quebec jobs was worth ousting a star cabinet minister and enduring a hurricane of criticism in an election year.

Wherry doesn’t explore that reason, though future books certainly will. If the Liberals lose in October, those books will likely start appearing in the spring or summer of 2020, as ex-MPs settle some old scores. If the Liberals win, perhaps the books will be delayed until the late 2020s. But at some point we will learn, perhaps in a book by Aaron Wherry, what the hell was going on in Ottawa in the year before the 2019 election.