ICE is the agency, formed after the terrorist attacks of Sept. 11, 2001, that finds and deports undocumented immigrants living in the U.S.

Hootsuite had earlier cancelled its contract with ICE after Anderson and other employees revolted over the relationship.

But if helping law enforcement spy on people is a source of ethical controversy for social media industry employees, expect more tensions where they work.

That’s because ICE is not unusual among forces in using the kinds of services Hootsuite and similar firms provide, even though such software tends to be marketed as business tools.

Hootsuite and competitors allow their customers to track and parse what’s being said on a wide range of social media platforms. Those capabilities are attractive to law enforcement agencies and they are frequent and valuable customers of such service providers.

The suites also perform further analysis to help identify trends and gather location data and other information that may help investigators. Critics of police use of the monitoring suites argue that protesters and marginalized groups could be disproportionately affected by targeting.

Salesforce, which employs more than 1,300 Canadians according to the company’s website, is the creator of Social Studio, a social media monitoring suite. The Tyee revealed that Social Studio was used by the RCMP in its Project Wide Awake program — created in the wake of shootings in Moncton. The force began using the software to respond to crimes but said it later switched from a reactive to “proactive” approach to attempt to identify and prevent crimes before they occur by monitoring social media.

More recently, the RCMP told The Tyee it expanded its social media monitoring program to use Babel X, which is more explicitly designed for law enforcement purposes.

A look into the past shows Hootsuite long recognized the value of its service to law enforcement.

A tweet from 2013 shows Hootsuite advertising the Vancouver Police Department’s use of its software to “monitor crime and share info” to help track participants in the 2011 Stanley Cup riots.

In the now deleted blog post, then constable Anne Longley spoke of the early days of the VPD on Twitter after the department got an account in 2010, and the change in approach a year later with the Stanley Cup riots.

“What I was not prepared for was the nearly instant tweeting of photos of the riot and the suspects who were participating in the riot. This was a new phenomenon for the VPD, as was the social justice and social shaming that occurred in the days following. Social media was all of a sudden front-and-centre, with ‘Identify the Rioter’ Facebook pages popping up and photos being shared over and over again.”

By 2013, the time of the Hootsuite blog post, the VPD had changed its practices around gathering and sharing information from social media.

“We now use social media for every big special event in Vancouver. We work alongside other agencies and the City of Vancouver to have a more cohesive approach and ensure we’re all sharing information prior-to and during events. On a day-to-day basis, I monitor both Twitter, using Hootsuite of course, and Facebook.”

Today the VPD is looked at as a pioneer in policing using sophisticated algorithms. 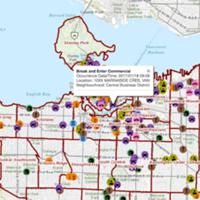 The episode with Hootsuite and Anderson is the latest example of an employee choosing to risk their career by calling attention to questionable practices by large tech companies.

Vancouver-based former Amazon VP Tim Bray departed a role at the company last year, in solidarity with climate justice organizers fired at the company, after organizers from data centres attempted to unite tech and warehouse employees for an event that called for better working conditions for the latter.

Victoria native Chris Wylie, who co-founded Cambridge Analytica, shared information on the practices of the organization that helped expose actors engaged in election interference and misinformation. In this case, Wylie later safely landed a job at clothing retailer H&M as a research director.

Anderson, after saying she’d been ejected by Hootsuite, tweeted that in her next job she would like to move away from the social media industry.