When Amazon senior engineer and vice-president Tim Bray quit his lofty post earlier this month, he said he was rejecting a “vein of toxicity” running through the company’s work culture. The Tyee interviewed Amazon workers who shed light on that poisoned atmosphere.

It was their new efforts to unite tech and warehouse workforces to press for changes that triggered a sudden, swift purge of employees involved, they said. At the centre of the storm: a petition demanding better COVID-19 protections for warehouse workers.

On Friday it was reported that Amazon Canada is cancelling the topped-up pay it was giving employees for working in hazardous conditions, even though some have tested positive in several Canadian Amazon facilities, including an outbreak in an Alberta site.

Bray made headlines when he resigned May 1 as head of Amazon’s web services division. In an entry in his blog headlined “Bye, Amazon,” he wrote, “I quit in dismay at Amazon firing whistleblowers who were making noise about warehouse employees frightened of COVID-19.”

The “big problem,” said Bray, is “Amazon treats the humans in the warehouses as fungible units of pick-and-pack potential” in keeping with “how 21st-century capitalism is done.”

Amazon plans a major expansion in Vancouver, expecting to lease more than a million square feet of new office space downtown. But Bray, who lives in Vancouver, won’t be in the building.

After more than five years helping to run the company, Bray, a Canadian who calls himself a “lefty,” said the decision likely would cost him a million dollars. But “remaining an Amazon VP would have meant, in effect, signing off on actions I despised. So I resigned.”

Before the pandemic, some tech workers at the online giant formed a group called Amazon Employees for Climate Justice to press the company to improve its climate change efforts. Their attention turned to health and safety after the virus spread to 74 Amazon facilities across the U.S., a warehouse manager in California died of COVID-19, and two warehouse employees in Minnesota and New York were fired after criticizing lack of safety measures.

Maren Costa is a former principal UX design lead and member of AECJ at Amazon in Seattle. In an interview with The Tyee, she said that she and another fired co-worker, Emily Cunningham, were told by bosses their terminations were connected to sending emails not directly related to their work and making solicitations.

But the punishment signalled a shift in enforcement that Costa believes was designed to prevent workers in two arms of Amazon joining forces to demand changes.

The April 10 email that triggered firings was by AECJ member Chris Hayes, who had already given his two-week departure notice. It was a calendar invitation to a livestream event featuring Naomi Klein, designed to unite tech workers in solidarity with warehouse workers, and forwarded around by other employees.

By the afternoon, the event had 1,500 acceptances. Then it suddenly disappeared from each person’s work calendar, as did the email from each inbox, as though it had never been sent.

Costa, who had worked at Amazon for 15 years, says she and Cunningham were cut loose the same afternoon. Cunningham’s April 15 tweet thread about the firings is here.

“We got fired exactly when Amazon realized we were trying to create a conversation between tech workers and warehouse workers,” Costa told The Tyee. “That’s what freaked them out. And that’s what made them so desperate to get us out of the company.”

Costa said the official reason management gave for terminating her and Cunningham was “for forwarding an email that someone else had sent” that violated company policies. That email Costa sent on March 27 and for two weeks she heard nothing about it from superiors.

But on April 10, she and Cunningham were terminated immediately after Chris Hayes sent out his separate event invitation.

Costa said she received a human resources meeting request the afternoon of April 10, and was asked one question: “Are you recording this?”

Then, via a video phone call, HR informed Costa she forfeited employment by ignoring a warning about violating Amazon’s external policy that no solicitation or non-work related communications were allowed on the company’s email system. Costa said the rule she was accused of breaking was “the most frequently broken and least frequently enforced policy.”

Chris Hayes’ departure was fast-tracked. That same day he was cut off from the email network and informed he was no longer an employee.

“We support every employee’s right to criticize their employer’s working conditions, but that does not come with blanket immunity against any and all internal policies,” an Amazon spokesperson told the Washington Post regarding the dismissals of Costa and Cunningham.

The firing didn’t stop Costa or other members of the AECJ group, who organized, among other events, a “sick out” encouraging Amazon workers in the tech division to take sick days in solidarity with warehouse workers who are not afforded paid sick days.

Tim Bray, meanwhile, has said there was no agenda behind his quitting and blogging about it. He ended his “Bye, Amazon” post saying: “I’m sad, but I’m breathing more freely.”

He added: “Amazon Web Services (the ‘cloud computing’ arm of the company), where I worked… treats its workers humanely, strives for work/life balance, struggles to move the diversity needle (and mostly fails, but so does everyone else), and is by and large an ethical organization. I genuinely admire its leadership.”

But Amazon’s warehouse workers “are weak and getting weaker, what with mass unemployment and (in the U.S.) job-linked health insurance. So they’re gonna get treated like crap, because capitalism. Any plausible solution has to start with increasing their collective strength,” Bray wrote.

Bray’s resignation meant a lot to employees at Vancouver’s fulfillment center, said a worker who spoke to The Tyee on a condition of anonymity. His high-profile move gave hope that tech workers will have warehouse workers’ backs if they organize themselves.

In February, just before Amazon workers were to engage in a scheduled walkout, which AECJ members helped organize as part of the international march on climate, Amazon owner Jeff Bezos announced measures that addressed some of the group’s concerns in the $10-billion climate pledge. The company did not acknowledge any AECJ role in coming to its decision.

More than 1,000 Amazon workers were scheduled to participate in the walkout, and several had been threatened with dismissal for speaking to the media.

Bezos’ proposal did not satisfy Costa, Hayes and other members of AECJ, who wanted Amazon to do more to fight climate change and be more transparent about its actions.

On April 10, the day Costa and others were fired, the AECJ group had gathered 8,702 signatures from Amazon employees and published an April 10 open letter to Bezos and the company’s board of directors urging they implement a climate plan.

What can ordinary, potential Amazon shoppers do to support such efforts? There isn’t much evidence that personal boycotts and bad public relations move the dial much at the web giant, says Costa. Amazon has huge resources to withstand such efforts and wage a public relations counter-attack.

Internal Amazon emails recently provided a glimpse of management efforts to discredit an Amazon warehouse worker, Chris Smalls, who helped organize a work stoppage in the company’s warehouse in Staten Island, New York, and was fired. The company said Smalls was terminated for ignoring a request from his manager to stay home after contact with a worker who had the coronavirus.

Amazon workers are constrained in telling the world about life inside the company headed by Bezos, said to be on the verge of becoming the world’s first trillionaire. “There was and is a huge gag order at the company,” said Costa. “I couldn’t be here talking to you today if I were employed at Amazon.”

What is needed is political engagement, says Costa — getting out the vote for candidates that will enact and enforce legislation for better worker protections and environmental practices.

“All types of legislation are going to be necessary to rein in the sort of unchecked power that Amazon has right now,” said Costa. “Amazon is not going to do this on their own.”

Bray offers a few suggestions in his “Bye, Amazon” post. 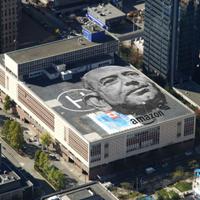 “We don’t need to invent anything new; a combination of antitrust and living-wage and worker-empowerment legislation, rigorously enforced, offers a clear path forward,” he wrote.

But evidence is mounting that tech giants like Amazon and Facebook are preparing themselves for a war on antitrust.

Costa finds hope in a May 7 letter sent by nine U.S. senators to Amazon’s leadership, calling them to task for firing whistleblowers and seeking the “company’s policies for discipline and termination regarding workers who raise health and safety concerns.”

“Coming together, speaking up, that is where the power comes from,” said Costa. Politicians need to know “their base is behind them” in order to “stick their necks out to send a letter to Jeff Bezos like that.”

“We all need to come together even stronger,” she said. “And when we do, we can be extremely strong if not invincible.”