A group of Haida elders in their nineties gathered around a microphone on Lucy Bell's dining room table. Every Haida word they spoke into it was another word recorded for future generations.

It was a touching experience for Bell. Her grandmother spoke Haida, a language also known as Xaad Kil and X̱aaydaa Kil when she was young.

"Many in my generation grew up hearing it but not speaking it, and knowing how precious it was to learn it," said Bell, now 45 and co-ordinator at Haida Gwaii's Xaad Kihlga Hl Suu.u Society of language. She learned Haida as an adult.

Indigenous languages in Canada are declining as elder native speakers die. Not long after Bell made the Haida recordings, two of the elders who participated passed away.

The language project that Bell is a part of began in 2013. The Social Sciences and Humanities Research Council (SSHRC) of Canada awarded a $2.5-million partnership grant to Simon Fraser University's First Nations Language Centre. The money supports a seven-year project to preserve and revitalize the languages of 22 First Nations groups in British Columbia and Yukon, with technology playing a large role.

The language recordings that Bell and others produced are more than simple records; they're part of interactive lessons for web and mobile apps. Bell's dream is that the new tools will help teach Indigenous youth their languages as early as possible.

"We're at a watershed moment," said Marianne Ignace, director of the First Nations Language Centre. "Many languages only have a handful or even fewer elderly people who were raised speaking those Indigenous languages in the home, and once that generation is gone, that's kind of it."

There's also the history of residential schools that "literally beat the language out of First Nations children," Ignace said.

The web and mobile apps will teach students words, grammar and composition. Lessons are Internet-based, and data on students' learning habits will be collected -- such as how long it takes to complete a unit or which questions are the most challenging. Using this information, teachers can adjust lessons to best fit students.

And it's not just language that's being passed on. The apps have old stories too.

"Language and culture have to go to hand in hand," said Bell. "For example, in Haida, we don't use north, east, south, west; we use 'towards the ocean.' It's a different kind of thinking, and we have to know that way of thinking in order to speak proper Haida."

One story in the apps is the epic journey of Tlli7sa and his brothers across B.C.'s interior, encountering cannibals, a bear and a poisonous tobacco tree. The stories are accompanied by graphics, just like a digital picture book. 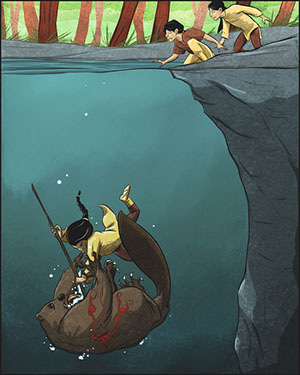 From the Tlli7sa story text: 'He charged up to the beaver, he stabbed him with his harpoon, and he got dragged to the bottom of the water.' Illustration by Braden Hallett, who worked closely with elders to produce the images.

Costa Dedegikas is the technology advisor at the SNF New Media Lab at SFU helping develop the Indigenous language apps. He's visited many First Nations communities and was surprised that many languages are as different from one another as "Chinese is to Italian." Dedegikas has experience with developing educational technology and emphasized the collaborative approach to creating this set of apps.

"In each community that we're working with, there's always a designated leader that's contributing artwork and recordings," said Dedegikas, "and each community has a crop of young people taking interest in language. A lot of artwork has been done by young learners specifically for this project."

The first of the apps is expected to launch this fall.

In addition to creating these learning tools, money from the SSHRC grant is also going toward the digitization and storage of all collected language and culture content.

"All technology has a shelf life," said Dedegikas. "We're doing this so content can be reformatted to be displayed by the next generation of technology."

For Ignace, ensuring that these languages survive has been part of her life's work long before she headed the First Nations Language Centre.

Ignace came to B.C. from Germany in the late-1970s to complete a PhD in anthropology at SFU. For her thesis, she did ethnographic research in Old Massett on Haida Gwaii.

"I just fell in love with the place," said Ignace, "the people, the culture, the language." She was adopted by and lived with elders of the Yahgu 'laanaas Raven clan. "They taught me their language and they taught me their stories. I was really fortunate and blessed to have been able to do that. Most of them are gone now."

Ignace eventually married Ronald Ignace, who is chief of Skeetchestn in the Secwepemc Nation. Together, they taught their children the Secwepemc language at home.

"Nobody else was going to do it, so we had to, especially with the challenge in the world of English being everywhere," she said.

With the new tools and resources Ignace is helping develop, there is hope that the languages spoken before Canada was Canada will live on.