Recent history is unfolding fast and governments are making sweeping moves to protect citizens in the COVID-19 pandemic.

Yet the small bubble of Alberta’s oil patch seems somehow still insulated from the outside world. Premier Jason Kenney just prioritized a $7 billion public intervention to build the Keystone XL pipeline to transport now worthless bitumen, shortly after laying off 20,000 education workers in the midst of a pandemic.

And while the rest of country stands six feet apart to slow the spread of a deadly disease, some 30,000 transient oilsands workers in more than 70 crowded work camps still inexplicably cycle through jobsites that have just become a perpetual infection machine.

Every two weeks, this cohort of mostly younger men living in cramped conditions will disperse across the country to their families and return back a week later. Rather than closing down work oilsands sites as an obvious threat to public health, the Alberta government plans to designate them an essential service.

Ontario has likewise decreed that their construction industry is essential, leading one worker to pointedly ask in a CBC story, “are we essential or expendable?” A viral video from a jobsite shows the tensions that so-called essential workers feel in the absence of safe working conditions or facilities needed to prevent infection.

Transient workers in oilsands operations deserve the same generous relief measures afforded to the rest of Canadians. Why then are they forced to continue working in some of the most infectious conditions in the country when other Canadians are safe at home with their families and receiving most of their salary?

Ottawa has the prerogative to implement the Emergencies Act which would enable it to override the provinces and shut down all such transient work camps. Instead, the federal government is considering a $15 billion bailout for the oil patch, which recently represents a grave threat to public health.

The wisdom of this is all the more unfathomable given how far the industry is economically underwater. As of this writing, Western Canada Select is trading at $3.82 per barrel — far below the break even price of production or even the cost of shipping.

A recent CBC story showed that a Barrel of Monkeys is now worth more than a barrel of diluted bitumen. In fact, it is far worse than that. WCS typically includes about 30-40 per cent of imported diluent, which is currently trading at more than double that amount, meaning the bitumen portion is now functionally worthless.

Even before the Saudi-Russian price war and a global pandemic, ever-expanding oilsands output represented only a puny part of provincial income. Bitumen production in 2018 was 1.1 billion barrels with an average market price of US$38.46 per barrel for a market value of $56 billion. That same year, the Alberta government collected $3.2 billion in bitumen royalties — less than seven per cent of total provincial revenues and only 5 per cent of what the public resource was worth. This already dismal public rate of return is about to get a lot worse.

The legal minimum royalty rate in Alberta is one per cent of the value of gross production, meaning that in the current fiscal year, the Alberta treasury could expect as little as $100 million from this supposed titanic economic engine, or about 0.2 per cent of provincial revenue. In a normal year, the Alberta government shovels 20 times that much in public subsidies at the energy sector. 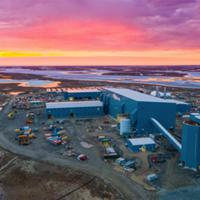 Mining and Petroleum Workers: ‘Essential’ or ‘an Enormous Risk’?

This is not a normal year. After factoring in inevitable federal and provincial bailouts for this most favoured sector, the net public loss from bitumen industry will be enormous.

While the world is in the throes of a deadly pandemic, we should also not forget the looming threat of climate change that is projected to be far more globally destructive in the long term. The life cycle emissions of Canadian bitumen are about 550 kilograms per barrel.

More than a billion barrels per year of annual bitumen production results in around 600 MT of carbon emissions as it is refined and burned around the world — close to all emissions of our entire country.

So if oilsands operations are gushing red ink, obliterating our climate targets, and — most importantly — endangering Canadian lives, why on earth are they allowed to continue operating? The rest of the country has to stay two metres apart — why the special treatment?

There are esoteric reasons for not shutting down bitumen extraction. Heating up in-situ deposits takes a long time and much energy.

But while temporary shut downs cost money to restart, they do not seem to cause major extraction problems down the road. In any case, why would we want to imperil Canadian lives for the sake of keeping tar warm?

A more plausible explanation for the puzzling political inertia in shutting down bitumen work camps is the massive exposure of Canadian banks from unwise oilsands investments. In 2019 alone, our big five banks collectively invested more than US$40 billion in the oil and gas sector — 25 times more than in renewables. From 2016 to 2018, Canadian banks provided more than half of the global financing for oilsands expansion. Bay street donors certainly have the ear the Trudeau government. What words are they now whispering (or screaming) behind closed doors?

The oil sector has always been a special snowflake. Are we going to indulge baseless expectations of another oil boom even if it kills us? Canadians will get through this — standing together while staying two metres apart. During this historic moment, no sector should be exempt from sensible measures to contain the outbreak. Not even the oil patch.