If testimony from Gerald Butts was supposed to be the Hail Mary pass that would let the Liberals pull victory from the jaws of defeat after Jody Wilson-Raybould’s devastating testimony, the ball ended up six rows into the bleachers.

Minutes after the prime minister’s former principal secretary left the justice committee hearing, NDP leader Jagmeet Singh denounced his “baseless” testimony and renewed his call for a public inquiry. There is no surprise in that.

Gerald Butts not only failed to put the scandal to rest, he guaranteed that it will escalate. That’s because instead of showing contrition for a job well-botched, as some had predicted, Butts doubled down on the dubious proposition that neither the Prime Minister’s Office nor any other high-ranking officials had done anything wrong.

Cue the nasal coffee rockets. If no one did anything wrong, why have there been three shocking resignations over the SNC-Lavalin affair so far — two respected federal cabinet ministers and the PM’s principal secretary?

Despite all of his huggy-bear, kissy-face posturing in front of the committee, including the claim that he didn’t want to “cast aspersions” on his former colleague, Butts tossed former attorney general Jody Wilson-Raybould into the wood chipper.

Butts rejected all the key evidence Wilson-Raybould had presented to the justice committee last week. Which is to say that he returned the whole scandal to exactly the place the Liberals want it — a political soap opera of “he said, she said,” where only subjective perspectives are known and the facts remain forever hidden.

The way Butts told it, the whole thing was a mirage.

Wilson-Raybould had not been hounded or pressured to change her mind about the decision to proceed to trial against SNC-Lavalin; he had not said that any solution to the SNC-Lavalin case would require some form of interference in the justice process; and 10 or 11 contacts with high-ranking public office holders, including the prime minister, Butts, the Clerk of the Privy Council and officials from the PMO, did not amount to hounding or pressure. In fact, over a four-month period, 10 or 11 contacts were not very many contacts at all, Butts said.

Butts also testified that based on his experience with the Clerk of the Privy Council over three-and-a-half years, he couldn’t picture Michael Wernick bringing up partisan political considerations in his private discussions with Wilson-Raybould over the SNC-Lavalin case. Although Butts had no direct knowledge of that conversation, he was giving the benefit of the doubt to the clerk — anyone but Jody Wilson-Raybould.

Strangely enough, Butts also spoke openly about details of Jody Wilson-Raybould’s cabinet appointment to veterans affairs. The ex-minister herself had testified before the committee that the restrictions imposed on her by an Order-in-Council prevented her from speaking on that subject. Butts is testifying under the same Order-in-Council. Why did he go further?

Did Wilson-Raybould misunderstand the terms of the waiver that permitted her to speak at all? Or did Butts want to put on the record Wilson-Raybould’s unhappiness with her demotion — and a possible motive for making the complaint of interference on the SNC-Lavalin file?

Wilson-Raybould has a lot of reasons to be fuming about the former principal secretary’s unsworn testimony. For example, Butts continued the line begun by the prime minister that if Wilson-Raybould felt aggrieved about improper pressure, she was obliged to report it to him. Despite Wilson-Raybould’s own testimony about raising the question with Trudeau, Butts testified that she didn’t do that — and left it to the committee members and the public to draw the appropriate conclusion. It was all her fault.

Butts also testified that he and Wilson-Raybould were getting up from their December dinner meeting at the Chateau Laurier last year when she raised the subject of SNC-Lavalin. The implication is obvious. If it was such a big deal, why would she raise it with Butts as a virtual afterthought as they were leaving?

It would have been bad enough if it stopped there. But Butts went further in his flannel-throated minimizing of Wilson-Raybould’s testimony. He claimed that the first time she raised the issue in a serious way was at the time of the cabinet shuffle, in which she went from the justice portfolio to veterans affairs.

Butts didn’t have to connect all the dots to get at what he was implying. As long as she was justice minister, Wilson-Raybould made no complaints. It was only after she was demoted from her “dream job” that she began to complain about interference in the SNC-Lavalin file.

In other words, at the bottom of the ex-minister’s complaints against untoward interference was not concern about the integrity of the justice system, but sour grapes over losing her job. Butts, of course, never said that directly.

Butt's testimony featured a few other things that were outlandish. He said that the first time he learned that the Wilson-Raybould had reached a final decision in September on the SNC-Lavalin case was when she testified last week.

Really? SNC-Lavalin itself received word on Sept. 4 from the Director of Public Prosecutions that the company would not be getting a deferred prosecution agreement and would be facing a trial.

Butts also stressed in his testimony that there was no pressure on Wilson-Raybould to change her decision on SNC-Lavalin, only to inform the decision with the outside expert opinion of former Supreme Court Chief Justice Beverley McLachlin.

But if Wilson-Raybould and the Director of Public Prosecutions had arrived at their final conclusion, the only purpose outside advice could serve would be to have their decision reversed.

One other thing became apparent in the wake of today’s testimony from Butts. The justice committee, chaired by a Liberal and controlled by Liberals, will never get to the bottom of the SNC-Lavalin affair. That, of course, is their purpose. 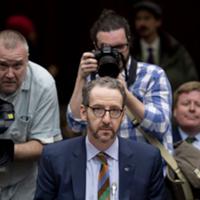 On the Record: We Did Nothing Wrong, Says Trudeau’s Ex-Top Advisor

The committee killed two motions today that are obviously needed to determine the facts in this matter. The Liberal majority voted against requiring the government to produce all communications between high government officials, including Butts and the prime minister, on the SNC-Lavalin case.

They also voted down a motion to have Wilson-Raybould return to the committee to respond to evidence from Butts that contradicted her own.

People with nothing to hide don’t stand on their heads coming up with ways to suppress information.

They don’t leave the matter to a hopelessly partisan committee to smother in the basement like an unwanted kitten.

They don’t impugn the reputations of others with the full force of the government behind them.

Justin Trudeau has the power to do all that and, yes, even the ability to have his new attorney general, David Lametti, let SNC-Lavalin avoid a criminal charge of bribery and corruption by negotiating a deferred prosecution agreement.

If he does though, he and his party will face the full political consequences.

After all, if a government is willing to fiddle with the criminal justice system in pursuit of its economic agenda, what wouldn’t it do?