American politics often sets the tone for Canada as well. Stephen Harper followed in the footsteps of George W. Bush, right into a pointless war in Afghanistan. Barack Obama primed us for Justin Trudeau — a good-looking family man, if a little ineffective.

We already have a couple of Canadian wannabe Trumps in People’s Party leader Maxime Bernier and Ontario Premier Doug Ford. Will we also see a Canadian version of Alexandria Ocasio-Cortez?

The new congresswoman from the Bronx is playing out a variation on the theme of Horatio Alger’s novels: young, female, of Puerto Rican descent, smart and hardworking. But she also says shocking things (70-per-cent marginal tax rate!), violates political norms (a sit-in in Nancy Pelosi’s office!), and scandalizes the American media (when I googled her name I got 21.3 million hits; two hours later it was 21.6 million).

That sounds like a variation on the populist theme of Donald Trump. But Trump’s egomania and dishonesty give him away every time he opens his mouth — especially when he’s answering his critics. Ocasio-Cortez keeps her own ego tightly controlled, and argues from facts. That makes her far more credible.

It also makes her tougher to fight, because her adversaries are completely out of the habit of relying on evidence in any argument. All they have in any debate are ideological assertions and personal attacks. Her critics reveal themselves as stuffed shirts, fretting about how well-dressed she is for a struggling young worker, and saying it’s “downright scary” that she wants medicare for all, clean campaign financing and women’s rights.

A rediscovered video of Ocasio-Cortez dancing as an undergraduate was posted to discredit her; it blew up in the critics’ faces, making her look even cooler.

Almost singlehandedly she has dominated social media, especially Twitter. When I started following her last summer, I was one of 89,000. Now, as @AOC, she’s got 2.6 million.

You would think 288 characters is nowhere near enough to articulate policy, but you would be wrong. So when @AOC calls for a 70-per-cent marginal tax rate (starting on incomes over US$10 million), she overturns 40 years of Reagan-Thatcher cant about lower taxes increasing prosperity.

And again her critics build her up: at the World Economic Forum in Davos, billionaires like Michael Dell and Bill Gates laughed at the idea of such a tax. When billionaires (whom she rightly calls “policy failures”) make you a gift like that, you take it.

This kind of impact is what any politician dreams of, and we can safely assume that they are all trying to decode @AOC’s ways to learn the secret of her success.

No one in Canadian politics, however, seems to be paying attention — least of all on the left.

But our politicians lurched onto the web very awkwardly in the early 2000s, and they have acquired only superficial skills since then. And they are terrified of the online world. They know how quickly the internet can destroy a political career, like Tony Clement’s.

So former PM Stephen Harper confines himself to bland tweets with heavy use of “great,” “excited,” and “energizing” in describing his post-political career dealing with other affluent suits. Justin Trudeau (or his staff) issues feel-good tweets about how Canada is the best place in the world. Tory leader Andrew Scheer is cranking out halfhearted attacks on Trudeau and the “crushing brutality of socialist rule” in Venezuela.

Even Green Party leader Elizabeth May is entering an election year with tweets about B.C.’s current fuss about the Plecas report, which seems unlikely to improve federal Greens’ prospects next fall.

Social media thrive on surprises and shocks, and the only Canadian politicians who seem to undstand this are Maxime Bernier and Doug Ford. But Bernier runs out of surprises after “immigrants bad!” and Ford wants only to keep money in your pocket — as explained by his personal news service.

We’ll know we’ve got a Canadian @AOC when his or her tweets make the media scream like a teacher sitting on a tack and political authorities clutch their proverbial pearls until the string breaks. It’ll be a young politician who thrives on five-buck donations, and takes over the local constituents’ association so decisively that the federal party doesn’t dare refuse to sign the papers. 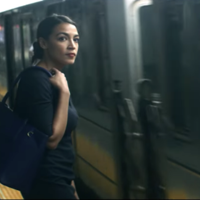 Young Woman from the Bronx Just Transformed Our Politics

The Canadian @AOC will likely come from a taken-for-granted group — young women, Indigenous people, LGBTQ, any of dozens of immigrant minorities. Like her, the upstart will start by beating the establishment at its own game — knocking on doors, hitting nerves, taking over social media and ambushing the mainstream media with a story they hadn’t expected. The upstart’s own party will take it very badly, at least until other upstarts appear and start polling well. The other parties will try to shrug off the new threat as just another pretty face, rather as Justin Trudeau was treated in the 2015 campaign.

Most likely the upstart will be in the New Democrats or the Greens. The Liberal and Conservative bases alike are too invested in the status quo to endorse some crazy kid who seriously intends to stop climate breakdown and start pharmacare for all. But the NDP and Greens are strategically conservative, solemnly reasonable, and reluctant to call bullshit on their adversaries. An upstart in their ranks would scare the daylights out of them.

Until the upstart is polling well, and everyone adjusts to a Horatio Alger meets David and Goliath story. At that point, the upstart’s party will remember that there are way more Davids than Goliaths in the electorate, and start training all its candidates in how to use a slingshot.

The upstart may not appear in next fall’s election. But given the current state of North American politics, the next Canadian election could well coincide with the Americans’ in 2020. In both countries, expect the Goliaths to fall, and the upstarts to dance.