Can climate policy be counterproductive? Countries of the world clearly need to develop plans on transitioning away from the fossil fuel economy — a daunting and critical task.

But what if those long-in-the-future plans are instead used as a fig leaf to justify business as usual carbon extraction?

Our prime minister holds forth the fight against climate change as a rationale for the Trans Mountain pipeline and massively increased exports of unprocessed bitumen. So how small is Justin Trudeau’s fig leaf?

The tangled logic is thus: 1) a pipeline to tidewater is necessary to win support for a national carbon tax and 2) this pipeline will fuel prosperity by accessing export markets hungry for Alberta bitumen.

But the prime minister already has the regulatory power — and parliamentary votes — to bring in national carbon pricing. No pipeline is required. There are, of course, political practicalities at play, however there are zero legal or constitutional impediments to Ottawa taxing this planet-threatening pollutant immediately, as Norway did 27 years ago.

Previous articles have also debunked the myth of eager export markets, as well as highlighting the embarrassingly tiny return Alberta is realizing for its bitumen bounty.

What about carbon pricing? Can this policy panacea really reduce extraction and burning of fossil fuels? The devil as always is in the details, and most importantly how those details play out in the real world.

A recent study showed that methane leaks from thousands of well sites in northeast B.C. were 250 per cent higher than estimated by the B.C. government. Methane is 30 times more potent than CO2 as a greenhouse gas and these hitherto unknown emissions represent the equivalent of two million extra cars on the road.

Such methane emissions are somehow not included in Alberta’s highly touted carbon levy. If they were, Alberta could collect more public revenue from taxing wasted methane than the province currently collects in bitumen royalties. Pause to re-read that sentence if necessary.

Total industry reported methane emissions amounts to some 30 million tonnes of CO2 equivalent annually. Recent research reveals that number may actually be up to 45 million. Alberta taxes carbon emissions at $30 to $50 per tonne.

This means Alberta could realize revenues of up to $2.25 billion incentivizing reductions in methane wastage from the oil and gas sector compared to the $1.48 billion in royalties collected on bitumen extraction last year. If the Alberta government cared more about public revenue and/or tackling climate change, rather than keeping industry happy, including wasted methane in carbon pricing would be a no brainer.

Therein lies the credibility problem facing both Trudeau and Alberta Premier Rachel Notley. We are asked to believe that carbon pricing — a laudable policy goal — will somehow negate real world emissions from scaling up bitumen extraction at the end of the age of oil.

So far, Canada’s record of implementing effective climate policy is a shambles. Federal Environment Commissioner Julie Gelfand and auditors general of nine provinces just co-authored a study showing how every single plan has failed to meet carbon reduction targets. The Rio commitment in 1992 and Kyoto in 2005 have both come and gone. The federal government no longer speaks of Canada’s 2020 emission target made in Copenhagen that we will overshoot by some 20 per cent.

And Trudeau’s much touted carbon tax plan? The auditors general were blunt. “Meeting Canada’s 2030 target will require substantial effort and actions beyond those currently planned or in place. It is unclear how Canada will meet this target.” Another recent assessment from the United Nations is similarly skeptical.

Not only will this latest plan likely fail to meet Canada’s rather unambitious emissions targets for 2030, it is also being used as political cover to build a bitumen pipeline to the B.C. coast.

Canada is certainly not the only global laggard. A recent report from the UN shows measured levels of atmospheric carbon have never been higher and are rising at a record pace.

According to Dave Reay, professor of carbon management at the University of Edinburgh, “This should set alarm bells ringing in the corridors of power. We know that, as climate change intensifies, the ability of the land and oceans to mop up our carbon emissions will weaken. There’s still time to steer these emissions down and so keep some control, but if we wait too long humankind will become a passenger on a one-way street to dangerous climate change.” 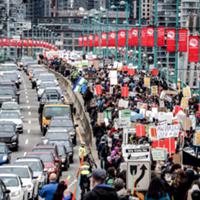 How Kinder Morgan Could Make Trudeau a One-Term PM

Where is that sense of urgency? Three years ago, world leaders signed the Paris Agreement — the latest in a long string of largely ineffectual agreements to avert climate catastrophe. High-level policy plus long political timelines so far equals very little. We need to be mindful that such aspirational photo-ops do not become part of the problem — a certain contentious pipeline comes to mind.

Tangible short-term actions would instead hold governments accountable during their elected mandates. Why does Canada no longer have a home retrofit program? Or a similar program for small businesses or public buildings? Why is ours the only country in the industrialized world lacking national rebates to purchase fuel-efficient vehicles? Why are Ottawa and the provinces still shovelling $3.3 billion in subsidies at the fossil fuel industry?

It’s easy for Trudeau to talk about sunny progress on climate change four elections into the future.

Mere inaction would be bad enough. It is far worse when vague climate goals are used to justify ever-increasing carbon extraction.