Agents from Canada Border Services Agency temporarily denied Sea Shepherd’s Martin Sheen entry to the port of Victoria last weekend after grilling the crew about the purpose of its mission in Canadian waters.

The vessel will now have to report to Canada Border Services Agency on who is on board the ship and its movements might be restricted.

“They are giving us a bit of a run around and some of it is a little over the top,” added MacLean.

For the last two summers, the Martin Sheen, a registered private yacht flying under the U.S. flag and operated by the Sea Shepherd Conservation Society, has parked outside industrial fish farms in B.C. and netted much controversy.

The vessel has assisted First Nations and independent biologist and wild salmon advocate Alexandra Morton in their fight to draw attention to the disease and parasite risks posed by densely crowded fish farms located on the migration routes of wild salmon.

Morton has sailed with the vessel the last two summers to highlight the growing prevalence of piscine reovirus, an influenza-like virus that now infects 80 per cent of all farmed salmon.

Last Saturday Canada Border Services Agency asked Capt. Chris Holt, an American, and the international crew questions about Morton and what the Sea Shepherd crew planned to do in Canadian waters this summer.

When the crew didn’t answer questions to the government’s satisfaction, Holt said, the agents seized his passport and detained the vessel.

The agents, however, allowed all seven crew members entry to Canada.

Holt told the Tyee that the agents were mostly concerned about the vessel’s mission and whether or not Morton was going to be on board and would be taking water samples.

The crew, however, couldn’t answer most of queries because they were just delivering the boat.

“Our purpose was to sail the vessel from Honolulu to Victoria and deliver it to the campaign crew,” Holt said.

“We didn’t have answers to their questions…. They were trying to find fault in our story but we are a delivery crew. We are sailors. We are not researchers and they seemed to have a problem with those answers.”

A different crew and captain will skipper the boat later this month.

According to Holt, the Canada Custom agents also said that there was no need for Sea Shepherd to do any research on the salmon farms “because the Canadian Department of Fisheries and Oceans already does research.”

However a recent report by federal Environment Commissioner Julie Gelfand warned that the DFO was doing a poor job monitoring the impact of industrial fish farms.

Gelfand noted that, “Fisheries and Oceans Canada did not adequately manage the risks associated with salmon aquaculture consistent with its mandate to protect wild fish.”

Although the department had implemented measures to control the spread of infectious diseases and sea lice, “it had not made sufficient progress in completing the risk assessments for key diseases that were required to understand the effects of salmon aquaculture on wild fish,” the report said.

“We are intent on hunting down evidence of the viruses and other pathogens from salmon farms that endanger wild salmon populations, and by extension — our oceans and our future,” reads the organization’s website.

Neither the vessel nor the crew have ever been cited with violating any Canadian laws.

Last year the BC Salmon Farmers Association characterized the Sea Shepherd’s Operation Virus Hunter campaign as an American-funded and organized activist campaign “attempting to paint a misleading picture of an industry that provides a healthy, sustainable product that feeds millions of people.”

The DFO and the fish farm industry have claimed the PRV virus is harmless even though it is strongly associated with a fatal heart disease that has become a major killer of farmed fish in Norway.

The virus has also been found in the hearts of diseased Atlantic salmon on B.C. fish farms.

After fish health inspectors in Washington State found the highly contagious virus in smolts, it banned the transport of 800,000 farmed salmon to open-net pens last week.

Last month Canadian researchers also identified another explosive PRV risk with a study showing the that virus can cause the rupturing of blood cells in Pacific Chinook salmon.

“These findings add to the existing concerns about the potential impacts of open net salmon farming on wild Pacific salmon off the coast of B.C.,” said Dr. Brian Riddell of the Pacific Salmon Foundation.

The organization has called for end to open-net pens on migratory routes for wild fish due to disease and parasite risks. 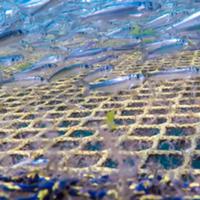 The BC Supreme Court recently refused to grant an injunction requested by Norwegian-based Marine Harvest that would have prevented the public from coming within 20 metres of its 34 fish farm facilities on B.C.’s coast. The court will hear the injunction request in June.

The company’s request was directed at the Sea Shepherd Society.

It asked for a 20-metre exclusion zone to keep out divers and photographers because as the injunction noted “Marine Harvest is concerned that the Sea Shepherd will return and resume facilitating further unlawful acts against Marine Harvest and increase the risk of confrontation.”

After a Canadian fish farm company released 150,000 Atlantic salmon into Pacific waters last summer due to negligence, the state government passed legislation that phases out Atlantic salmon net-pen farming in Puget Sound by 2022.