As the two-week marathon of climate talks wraps up today in Paris, the release of the final agreement text is already generating the predictable round of mixed reactions. But regardless of what has or has not been accomplished at COP21, there's reason to be optimistic. 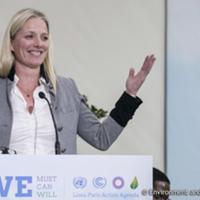 With Harper Gone, Buzz in Paris that 'Canada Is Back'

That's because solving climate change has a lot to do with the global clean energy transition that's already underway. The various actions countries are agreeing to under the Paris Agreement will only accelerate that transition.

FIVE THINGS TO READ ABOUT THE PARIS CLIMATE ACCORD

Here is the full text of the agreement.

Two cheers for the Paris agreement on climate change. (Council on Foreign Relations)

That's not meant to diminish the importance of the Agreement or the herculean efforts of everyone involved in raising the bar for global climate action over the past two weeks -- and in the years leading up to this moment. The final text of the Paris Agreement urges the world to limit warming to a level that scientists recommend, and aims for net-zero emissions globally by the second half of the century. These elements reflect the increased sense of urgency guiding global climate action, and that's both significant and encouraging.

Limiting warming to 1.5 degrees Celsius and seeing carbon pollution peak within a few decades are both hugely ambitious and necessary goals. Achieving them will require much more than a global agreement -- and that's a good thing. Of course, the text does not go far enough (these things rarely do). The five-year review cycles introduced in this agreement are an important mechanism for accountability as the world works to curb carbon pollution, but they will only be effective if countries step up (as the agreement urges them to) with stronger action to fill the gap between the emissions reductions needed and where current plans will get us.

Fortunately, governments, cities and businesses everywhere are gearing up for a wholesale energy-systems transition that includes new investment in renewable energy and low-carbon technology, and putting a price on carbon pollution. These are among the most effective tools we have to fight climate change.

As the Paris Agreement underscores the need to act urgently and boldly to put these tools to use, it will help send a signal to world markets that the age of fossil fuels is ending and giving way to a more sustainable, resilient and clean economy.

As U.S. Secretary of State John Kerry noted in his COP21 remarks, "If we send the right signals, if we make the right choices, the private sector will deliver. Clean energy is not only the solution for climate change, it is also the greatest market opportunity the world has ever known."

Looking for a quick exit

Nowhere has that message come through so clearly, and from so many directions at once, as it did over these past two weeks in Paris. A series of events showcased the technologies and solutions being developed by a whole new crop of entrepreneurs and innovators that are occupying and disrupting the energy landscape. As Tesla CEO Elon Musk put it: "It is inevitable that we will exit the fossil fuel era...The goal is to exit the era as quickly as possible."

Although the Paris climate summit marks an important milestone in the global clean energy transition, it was never meant to be the finish line. Now the real work begins for Canada's federal and provincial governments: building a cooperative national climate plan, making good on the promises they made in Paris, and ramping up efforts to cut carbon pollution and invest in clean energy across the country.

Canada will find itself in good company as it aspires to be a leader in the clean energy transition. That alone is a remarkable change, and reason to be optimistic as we look beyond Paris toward the next big milestone.