How many shell companies exist in Canada? How many legal trusts? Who are the beneficial owners protected by such unnecessary veils of secrecy? No one knows, because in most cases there is no legal requirement to disclose actual ownership even to regulators. In fact, more information is required to get a library card than to set up a company in most jurisdictions in Canada.

What we do know is that Canada ranks near the bottom among our OECD partners in terms of corporate disclosure requirements to fight money laundering and tax evasion. A recent report from Transparency International detailed the dismal situation and why our country has become a haven for dubious offshore property speculation.

“The Canadian government must take immediate steps to require all companies and trusts in the country to identify their beneficial owners to ensure Canada does not become a haven for corrupt capital,” warns Transparency International Canada executive director Alesia Nahirny.

Canada is one of the few developed countries that does not require the identities of company directors to be verified, or any information on shareholders. In most provinces it is legal to use “nominee” directors or shareholders without disclosing that they are acting on someone else’s behalf.

A nominee is essentially a sock puppet — the proverbial student or homemaker often listed as the title owner of some of Canada’s most expensive homes. Why would someone list a multi-million dollar property in someone else’s name? Some plausible reasons include to avoid taxes or to launder money. This practice remains completely and inexplicably legal in most parts of our painfully polite country.

Lawyers can also act as nominee directors, offering their clients an additional level of secrecy under solicitor client privilege unavailable in most other countries. A ruling from the Supreme Court of Canada in 2015 exempted lawyers and their firms from important parts of the Proceeds of Crime and Terrorist Financing Act, further widening the yawning loopholes in our laws meant to fight money laundering. According to an international oversight body, the Financial Action Task Force of which Canada is a member, “the legal profession in Canada is especially vulnerable to misuse.”

Toronto lawyer Simon Rosenfeld was secretly taped in 2002 during a meeting in a Miami bar with an undercover RCMP officer, who was posing as a member of a Columbian drug cartel needing money-laundering services. According to the officer’s testimony, after exchanging a token dollar to cement solicitor-client secrecy, Rosenfeld bragged that moving illegal funds through Canada was “20 times” easier than the U.S., where arrest and convictions are much more likely. He described the Canadian enforcement regime as “la la land” and said that five other lawyers in Vancouver laundered $200,000 per month through trust accounts for a seven per cent commission.

The transcript of this conversation did not endear Rosenfeld to the jury during his prosecution and he was sentenced to three years in jail. He appealed the conviction and the higher court judge increased his sentence to five years. This rare successful enforcement provides some fleeting schadenfreude, but Rosenfeld’s seasoned and sad assessment of “la la land” continues to ring true.

Millions of legal trusts are estimated to exist in Canada, but there is no way of knowing since there is no requirement for them to be registered or file any record of their existence — again an outlier among other countries. They are supposed to file information on assets and trustees with the Canada Revenue Agency but only a small fraction actually do.

A trust is the consummate legal black box. Considered a mere private contract under Canadian law, trusts do not need to keep records on beneficial owners, let alone file such documents with the federal government. Trustees can conduct transactions without disclosing their role as go-betweens, making it difficult or impossible for financial institutions to comply with money laundering regulations. To our international embarrassment, the Financial Action Task Force found in 2016 that Canada was less than fully compliant in 29 out of 40 anti-money laundering measures and “non-compliant” regarding transparency and beneficial ownership of such legal arrangements. 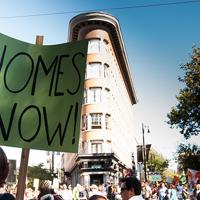 Vancouver, Let's Stand Up to Moneyed Interests of Real Estate

Real estate in Vancouver and Toronto is where the rubber really hits the road on these national regulatory failings. Transparency International looked at the title documents for the 100 most expensive homes in the Lower Mainland and unsurprisingly found a sampling of all these methods to conceal the beneficial owners. Twenty-nine properties were held by Canadian or offshore shell companies, 11 were owned by nominees with no obvious source of income, six more were held by trusts. In total, 49 of these luxury estates collectively worth more than $1 billion had opaque ownership.

According to professor David Ley at the University of British Columbia, Canada effectively sold Canadian citizenships to rich offshore investors through the now-cancelled Business Immigration Program. Ley described the scheme during a lecture last September, detailing how up to 200,000 of the world’s wealthiest may have arrived in the Lower Mainland as a result of these public policy efforts, inflating property values and contributing to our current housing woes.

According to Ley, Canada’s BIP was heavily oversubscribed because Canada was selling citizenships for far below the international market rate compared to other countries with similar citizenship-for sale incentive programs. In the U.S., candidates had to invest $1,000,000 and employ up to 10 Americans before being granted citizenship. In Canada, investors only had to loan provincial governments $800,000 to be paid back in full after five years. This come-and-get-it attitude towards passports and global capital seems sadly similar to other national assets such as natural resources, but I digress.

Besides ballooning our housing prices, was there a net economic benefit to this citizenship fire sale? According to Ley, the federal immigration database showed that “of all immigration streams to Canada, the Business Immigration Program led to the lowest declared incomes, lower even than refugees.” This was in part because wealthy offshore investors are so skillful at avoiding taxation coupled with a shocking lack of enforcement from the CRA.

What can Canada do to clean up this mess and avoid becoming an even more desirable destination for dubious global lucre? A low-cost first step would be to require all Canadian companies and trusts to declare beneficial owners and publish this information on a public searchable registry. The United Kingdom brought in such a system in 2016 to improve in law enforcement and tax collection, which will more than cover the cost of implementation.

Transparency International has several other practical suggestions that are also supported by the banking sector and law enforcement:

Besides money launderers, tax evaders and criminals, who could possibly oppose these sensible and long overdue reforms? Is the Trudeau government going to act quickly to plug these gapping holes and bring our country in line with the global fight against illicit capital? The recent cash-for-access events with wealthy offshore investors provide a telling opportunity to see on whose behalf Trudeau is acting. The whole country is watching.