The Stanley Cup did not monopolize Canadian sports TV viewers in June. Women's soccer drew a record 3.2 million viewers to the quarterfinal loss to England on the last Saturday of the month. A heartbreaker on the pitch in Vancouver, but validation that Canadians are hungry to excel on soccer's global stage. 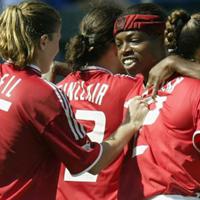 Canadians heard a lot about Christine Sinclair, the Burnaby striker who is among the best in the world (though her exhilarating goal wasn't enough to erase an early 2-0 deficit against England).  But organizers didn't spend enough time telling the story of the great players from other nations or about the history of Canadian women's soccer. So, now we know…

Canada's national team program was born in 1986, the same summer the men made their only World Cup appearance in Mexico.

Pioneers like Charmaine Hooper and Helen Stoumbos wanted to be part of the show and even planned a reunion of retired players, but felt like they got the cold shoulder. City of Vancouver came through with some tickets from its allotment and they found an ally in Canadian Soccer Association board member Amelia S. Fouques. The corporate lawyer from Montreal proposed before the tournament that the CSA withdraw from FIFA until its house is in order. At the pre-final banquet, Fouques criticized the lack of an alumni program.

Hooper and Stoumbos are both Canadian Soccer Hall of Famers. Stombous scored Canada's historic first goal in a senior World Cup at Sweden 1995 against England (the Mexico 1986 men were shutout in three matches). Before Sinclair, there was Hooper, who scored 71 times in 129 international matches and was the leader of the team that finished fourth at USA 2003.

"I represented my country for 20 years, how many national team players can say they started for their national team for 20 years straight?" Hooper said. "To think that I come to the World Cup in my own country and I'm not even offered a ticket." Added Stoumbos: "We would've been happy to participate in clinics, getting out to the grassroots outside of the stadium. We would've loved to have had an opportunity to get out there with kids, tell our stories and share what we went through and hopefully inspire."

The choice of venue for the City of Vancouver-backed FIFA Fan Zone was Larwill Park, the downtown parking lot near B.C. Place that once was a bus station and could be the future Vancouver Art Gallery site. Back on June 15, 2011, it was the epicenter for louts to burn police cars and light bonfires in the city's second Stanley Cup riot. The previous year's Winter Olympics also had some tense moments on the streets when too much beer, too much hockey and too much patriotism mixed. But the free entry Fan Zone, paid with $1.2 million in city tax dollars, not by FIFA, drew 130,000 to watch matches under the big tent, all united by the love of the beautiful game. It was a month-long moment to heal.

3. Hey FIFA, Americans have an appetite for soccer.

Some 22.86 million watched the final, making it the biggest soccer broadcast on American TV in history.

Such is the legacy of hosting the men's 1994 World Cup and the 1999 and 2003 Women's World Cups. The group stage match against Nigeria and the final, both in Vancouver, attracted Americans with and without tickets to the city by the tens of thousands.

The two-hour northbound border lineups on game day and the southbound lineups the day after featured minivan loads of families sporting the red, white and blue.

FOX broadcasting built a two-storey Whistler-style chalet near the Olympic cauldron from which to broadcast for a month. CTV/TSN, meanwhile, was holed away in a studio in suburban Toronto.

The American response underlined yet again the folly of FIFA's decision not to go there in 2018 or 2022. If Russia and Qatar go ahead as planned and 2026 is the first opportunity, expect the commercially lucrative and stadium rich Excited States to leapfrog over the bid that the Canadian Soccer Association might launch.

4. A hard landing for the artificial turf decision.

The player-led fight to force Canada 2015 organizers to use grass instead of the artificial turf concept that FIFA endorsed came too little and too late. The 2014-filed Ontario human rights complaint was abandoned in January of this year, much to the chagrin of outspoken U.S. captain Abby Wambach. It was grin and bear it and hope such a pitch battle never happens again.

Organizers didn't consider how much of a controversy it would stir. For many months it overshadowed the tournament itself. Wambach and Japan's Aya Miyama complained during the first round about the B.C. Place turf having an irregular bounce or roll.

France 2019 will be a return to natural grass and FIFA's technical study group will analyze all aspects of performance on artificial turf at Canada 2015.

Never had there been a senior final on artificial turf until July 5 at B.C. Place. If the women have their way, there won't be another. Canada 2015 could go down in the history book with an asterisk.

5. Hey FIFA, you bunch of sexists just don't get it.

Reporters asking in the days before the final which FIFA bigwig would present the trophy were supplied a rehearsed "it shouldn't be about the suits" line by FIFA's public relations representatives. FIFA's systemic corruption problems that are leading to the eventual resignation of Sepp Blatter are all about suits and some of the folks in them. That's why senior vice-president Issa Hayatou was booed when he led FIFA and NOC executives onto the pitch after the match.

One of them was Lydia Nsekera, the first woman appointed to executive committee. She left the stage and Hayatou carried on with the FIFA portion of the iconic handover of the hardware.

Blatter was back home in Switzerland, afraid he'd get arrested if he came to Canada and extradited to the U.S. His old boys' club missed the opportunity to let Nsekera, a woman, present the trophy to a woman. It would have been a powerful statement at the iconic moment seen by millions. FIFA flubbed it.

"This game is still very conservative," said Theo van Seggelen, secretary general of the FIFPro World Players' Union at a July 3 news conference announcing a drive to recruit female pro players. "It is out of touch and repeatedly fails to administer itself with responsibility."