For soccer players and detectives, it seems, timing is everything. 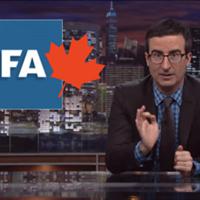 The beautiful game is mired in an ugly crisis. Police investigating FIFA descended on a Zurich luxury hotel May 27, two days before the anticipated re-election of president Sepp Blatter and 10 days before FIFA comes to Canada for the Women's World Cup.

Corruption charges levelled against 14 people involved in the world's soccer governing body are part of explosive investigation that could change the history of the sport. The U.S. Justice Department's allegations include charges of racketeering, wire fraud and money laundering.

The FBI claims there was a conspiracy that lasted 24 years and involved more than $150 million of bribes and kickbacks surrounding the awarding and hosting of the FIFA World Cup and major regional tournaments in the Americas, plus media and sponsorship contracts, and even the 2011 FIFA presidential election.

Canada was named the 2015 host of the Women's World Cup in March 2011. Since then, the only controversy faced by organizers was the campaign led by U.S. captain Abby Wambach to play on temporary grass pitches instead of the artificial turf in the six host stadiums.

Now, the first four letters in the event's title have cast a shadow that may not easily disappear. FIFA's lengthy troubles have already harmed sponsorship.

Canadian organizers were allowed to sell six sponsorships, but could only find three: a Japanese software company, the Canadian division of the global brewer that follows FIFA to each event and the telecommunications giant that has the TV and Internet rights. As the tournament rapidly approaches, organizers are flogging tickets for as low as $20.15 each.

On Wednesday, the Canadian Soccer Association issued a statement that said: "We are extremely disappointed by today's developments and welcome and support all efforts to eliminate this type of behaviour in the sport."

Meanwhile, the U.S. Justice Department's allegations go deeper than the suspicious awarding of the 2018 and 2022 World Cups to Russia and Qatar. Both countries have little experience hosting international soccer events. England and the United States submitted stronger bids. They have ready-to-use stadiums, sponsorship and broadcasting plans and a track record of mega events, including World Cups.

Police have not charged Blatter, and FIFA has no plan to reopen bidding for 2018 and 2022. Under Blatter's watch, FIFA has piled up $1.5 billion in the bank and the game couldn't be more lucrative.

The Canadian Soccer Association has been a quiet Blatter supporter for years, in particular for his role in Canada hosting the 2002 Under-19 Women's World Championship and 2007 Under-20 World Cup. Vancouver's 2010 Olympic bid committee sought Blatter's support and advice.

On Wednesday, FIFA spokesman Walter De Gregorio called FIFA a "damaged party" and claimed it was already cooperating with Swiss police last November. FIFA is unlikely to attract much sympathy. It is notoriously secretive and rejected reform measures proposed by some of the world's top experts, including Vancouver native Alexandra Wrage of anti-bribery organization TRACE International. Wrage quit in frustration from a FIFA reform panel.

Some of the names of the charged are no strangers to Canadians. Jack Warner was the FIFA vice-president who oversaw Canada 2007, the Under-20 World Cup tournament. Chuck Blazer was the senior FIFA official who oversaw the 2012 women's Olympic qualifying tournament in Vancouver and was supportive of B.C. Place Stadium hosting the Canada 2015 final. Trinidadian Warner quit FIFA's vice-presidency in 2011 and Blazer was on FIFA's executive committee until 2013.

Jeffrey Webb, a Cayman Islands banker, replaced Warner in 2012 as president of CONCACAF, the Confederation of North, Central American and Caribbean Association Football. Webb was among those FIFA officials charged on Wednesday. FIFA reacted by suspending Webb and 10 others, so his attendance at the Women's World Cup may be in doubt.

Canada 2015 kicks off June 6 in Edmonton when Canada hosts China. The final is July 5 in Vancouver's B.C. Place Stadium.