When the U.S. Supreme Court made same-sex marriage legal nationwide on Friday, cheers went up from people everywhere who believe wedding the person you love, regardless of gender, should be a basic civil right. 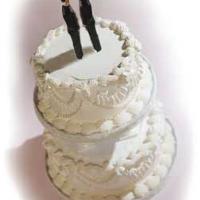 Why Gay Marriage Is Here to Stay

One who likely won't be high-fiving is Stephen Harper, the Conservative Prime Minister of Canada where gay marriage has been legal since 2005.

In fact, in 2003, Harper said he found "vile and disgusting" the notion that same-sex marriage might be a civil rights issue.

Tom Barrett traced Harper's views on the matter in a Tyee article published in 2004:

"In 1994, the Calgary Herald ran a headline stating 'Two Calgary Reformers Back Gay Rights.' Harper, who was one of the Reformers named in the article, would later tell Western Report magazine: 'I really got burned in the press on this one.' Harper explained to the magazine that his true position on gay rights was 'don't ask, don't tell.'

"Gays, he said, should be protected from discrimination in commercial or employment practices. He said he would accept the inclusion of 'sexual orientation' in the Canadian Human Rights Act if it were 'clearly defined, but not if it were used as a precedent for further benefits like marital status,' the magazine stated."

In 1994, Barrett reported, Harper was unequivocal in stating: "I do not support the legal recognition of same-sex relationships."

Ten years later he told CanWest News that his position on the issue had evolved. But not to affirming equality. Harper now said he would accept the concept of same-sex civil unions under provincial laws but opposed requiring churches to confirm same-sex marriages.

This, after Harper's startling statement, reported by Canadian Press in September 2003, that to say gay marriage was a civil-rights issue was 'disgusting.'

He said: "Regarding sexual orientation or, more accurately, what we are really talking about, sexual behaviour, the argument has been made that this is analogous to race and ethnicity. (For) anyone in the Liberal party to equate the traditional definition of marriage with segregation and apartheid is vile and disgusting."

South of the border, social conservatives jockeying for the Republican presidential nomination are expressing their own disgust with Friday's U.S. Supreme Court ruling. One is Canadian-born Texas senator Texas Ted Cruz. His take when news broke:

"Today is some of the darkest 24 hours in our nation's history…[T]his radical decision purporting to down the marriage laws of every state. It has no connection to the United States Constitution. [The judges] are simply making it up. It is lawless, and in doing so, they have undermined the fundamental legitimacy of the United States Supreme Court."

When Tea Party favourite Cruz decried social change made through "shameless judicial activism," he was echoing a tack taken by Harper years before.

As Barrett reported, in 2003 Harper "accused former prime minister Jean Chretien of conspiring to promote same-sex unions. After courts in B.C. and Ontario ruled that same-sex marriages should be recognized under the Charter of Rights and Freedoms, Harper charged the Liberals 'wanted to introduce this through back channels.

Actually, the idea that the judges involved were Liberal plants didn't add up, as Barrett noted:

Okay. Here we are a dozen years later. Why hasn't Harper used the power of his majority government to bring his itched-for debate about same-sex marriage to Parliament by introducing legislation making such unions illegal again in Canada? After all, Harper has yet to proclaim that LGBT people deserve the same rights as anyone else.

His zip-lipped reluctance to revive the fight probably has something to do with the fact that a strong majority of Canadians think same-sex unions should have the full legal weight of heterosexual marriages. Such support zoomed from 39 per cent in 2004 to 62 per cent in 2012, according to the polling firm Ipsos Reid.

Amazing what a civil rights struggle can accomplish, regardless of politicians who pander to a base on the wrong side of history.