[Editor's note: This is the last of five excerpts this week from The Arrogant Autocrat: Stephen Harper's Takeover of Canada by noted Canadian nationalist Mel Hurtig. For an interview with Hurtig about his just published book, click here. To find the whole series click here.]

In the run up to the 2015 federal election, the Harper government will try to convince Canadians that the prime minister and his crew have been excellent managers of the Canadian economy and that only they are capable of delivering the same stellar results in the future. Heading into this election, they had intended to present a balanced federal budget as proof of their sound stewardship. But as I write this in spring 2015, the latest projections are that the Harper government will have difficulty delivering the long-promised surplus this year. Thanks to the precipitous fall in oil prices and revenues, the government's budgetary watchdog, Mostafa Askari, estimated a deficit as high as $1.2 billion for this year, and as much as $400 million the year following. 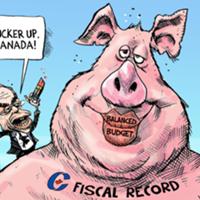 However, if the government is determined, Askari said, a balanced budget is still feasible should they choose to slow spending or delay capital projects. With the government's earlier forecasts in a tailspin, the budget for the current fiscal year was delayed, no doubt to allow time for a wizard to conjure new numbers that will allow Harper to pull a triumphant, balanced budget out of the proverbial hat.

But Harper's fiscal management is a tale of reversal and failure, not triumph. Department of Finance Fiscal Reference Tables reveal that in the years before Harper became prime minister, there were nine consecutive years of budgetary surpluses, from 1997 to 2007. In eight of those years, Ottawa amassed a surplus of over $79 billion. Yet In Harper's first eight years as prime minister, he managed to produce a deficit of almost $127 billion.

As Saskatchewan MP Ralph Goodale points out, Stephen Harper put the country back into deficit "before (not because of) the recession which arrived in late 2008."

Harper has delivered six years of budgetary deficits since. Goodale sums up the impact for Canadians: "Since 2006, [the middle-class has] endured nine years of frustrating stagnation, insecure jobs, declining job quality, flat incomes, ballooning debt, escalating education costs, low savings, inadequate pensions and the growing spectre of the current generation of young Canadians not doing as well as their parents did."

The price paid by Canadians

From now until the 2015 federal election, we can expect to hear many times from both the prime minister and Finance Minister Joe Oliver how successful they have been taming the deficit and achieving a surplus, some of which they will pass along to taxpayers in tax cuts. But we must ask ourselves, at what price? What programs and services have been slashed or eliminated?

How difficult can it be to balance the books when cuts and closures rule the day and program spending is estimated to have fallen by some $4 billion last year alone? The Harper government has cut almost 26,000 public service jobs in the last three years and, as I've outlined in other chapters of my latest book, they have dropped or axed many important programs and services.

Of course we all want balanced books, but balanced by increased economic growth and increased revenue from corporations paying their fair share of taxes, not by draconian measures that hobble our economy, shrink our workforce, and inflict long-term damage on our future prospects. Balancing the books is only meaningful when it has been achieved in concert with strong, healthy social programs and a thriving population with secure employment, accessible healthcare, and affordable homes.

What we are not likely to be reminded of in the Harper government's election year messaging is the accumulated deficit, or national debt, that has grown from almost $482 billion, the year before they came to office, to $612 billion as of March 31, 2014. This represents a massive increase of $130 billion on their watch.

Nor will we hear Harper or Oliver talk about the enormous public debt charges that we have had to pay on that national debt during their years in office. Since 2005-06, these charges have exceeded a whopping $280 billion. And that's just to March 31, 2014.

While the government rhapsodizes about its ability to produce a balanced budget and cut taxes, we will have paid over $28 billion in public debt charges just for the fiscal year ending March 31, 2014 alone. Can you imagine what $28 billion could do to ameliorate child poverty in this country? Or let me put it another way: is this sound economic management?

Our chance to choose

In this and four previous excerpts from my new book The Arrogant Autocrat: Stephen Harper's Takeover of Canada I have laid bare the sorry record of the Harper government in its management of our country's economy and our government's fiscal priorities.

It wasn't so long ago that Canada was a world leader in policy designed to produce a better, fairer and more just country for everyone. In recent years, all this has changed. Canada has dropped down the list of socially-progressive countries, with levels of poverty that most other major developed countries would not tolerate. Canada is changing rapidly and for the worse.

Please keep all of this in mind during the lead up to the federal election and as you head to the polls later this year. No amount of media or political spin can change the reality that many Canadians across this country are struggling to make ends meet in an economy that is increasingly geared towards rewarding the rich. Canada is drifting towards a state and a condition that is unrecognizable.