No wonder they're spending $7.5 million in public money to advertise Joe Oliver's budget. Bernie Madoff couldn't have come up with a sneakier sell than this. 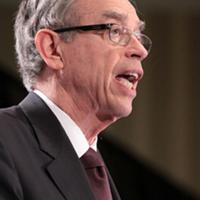 Tories Promise Balanced Budget, But So What?

Still, no one should be surprised. This misbegotten government's modus operandi is about much more than information control. It's about soaring, jet-propelled skullduggery in a never-ending political campaign. It's a power fantasy. It's Steve's way.

Armed with his narrative of convenience, Harper programs the electorate with fictions of prosperity, compassion and prudence. In the real world, he acts quite differently. There, he underfunds Coast Guard stations, veterans' offices, First Nations tribal councils, railway inspections, scientific research and Employment Insurance processing.

And don't forget health care -- $36 billion in cuts over ten years and still no Health Accord. Next step? Transfer tax credits for health to the provinces (after all, they administer health don't they?) and get the gum of medicare off Ottawa's shoe for good -- just like the founder of the National Citizens Coalition (once led by Steven Harper) advocated.

Numbers have a wonderfully elastic quality to them; like Harper cabinet ministers, they say what they're told to say. Numbers are the favourite tool of fraudsters and politicians alike. One swindles money, the other swindles votes.

Here are some examples of rubber numbers from Harper's past. When he wanted to buy F-35 fighter jets without a competitive bid process, he told Parliament the sticker price was $70 to $75 million per plane -- in the crazed world of death machines, a bargain. The real price was 40 per cent higher and the Harper cabinet knew that back in 2010 long before it started lying -- during an election, no less -- about the actual costs to the tune of $10 billion.

When Harper closed nine veterans centres across Canada, he told the House of Commons the shuttered facilities had very few clients. In fact, these doomed centres had between 2,000 and 4,000 clients each. The overflow had to be managed by the remaining centres without a corresponding increase in staff. As a dedicated citizen of Air Strip One, Harper claimed this would mean better service.

(In a political Hail Mary of note, the budget came up with cash for veterans in a bid to make them forget the $1 billion from their budget returned unspent by former veterans affairs minister Julian Fantino, the nasty court battles between Ottawa and disabled vets, and the inhumane cuts to their service centres.)

When Tony Clement was caught sprinkling his Muskoka riding with $50 million worth of gold dust courtesy of the taxpayer -- and culled from the budget of the Canada Border Services Agency* -- he tried to say it was all about the G-20 meetings. It was about pork and gazebos, of course; former auditor general Sheila Fraser said that what Clement had done was "unacceptable" by any standard of financial administration. Think of it as drinking 3,125,000 glasses of orange juice at $16 a pop.

Years ago, when I was writing a book on Canada's prison system, one warden told me that almost every inmate used drugs. Seventy per cent of the people sent to prison had drug abuse in their criminogenic profiles -- so curbing drug use inside the walls seemed like step one in any rehabilitation program. Instead, drug abuse in prison was increasing.

So in order to get a better statistic, the Correctional Service of Canada considered not counting marijuana offences in prisons. That way, it would at least appear that rehab was working. Inmates would be stoned, but uncounted.

And that's exactly how Stephen Harper fiddled this budget result -- a balancing act of unprecedented deception. Figuratively speaking, Joe Oliver's office stopped counting marijuana as a drug. As columnists Peter DeVries and Scott Clark pointed out so brilliantly in iPolitics, Finance changed the established methodology for how revenue forecasts are made.

Under the old system, the minister assumed an unchanged price for oil over five years in making his projections. But Joe Oliver, viewing the resource landscape through rose-coloured bifocals, is predicting that the price of oil will increase in each of the next five years.

He did that because the price of Brent Crude has dropped by 50 per cent since last June. Papering over that mile-wide crack in the revenue forecast called for a whole new level of voodoo economics -- especially in a budget that features $5 billion in tax cuts.

The Tyee is a fan of iPolitics, a top source for political scuttlebutt in Canada.

No matter what he says, the minister can't see into the future. For us to believe his revenue forecast, we have to blind ourselves to some obvious facts. There's a price war going on in the oil industry. Key producers are turning on the taps to put weaker players with a costlier product out of business. Major producers like Saudi Arabia are also hedging against any softening of long-term demand for their product -- because of a working climate change treaty, for example. The last thing they want is to create a situation where demand diminishes or disappears well ahead of supply. The fastest way to diminish demand is to make oil so expensive that it encourages the rapid development not only of costlier product -- like tar sands bitumen or fracked oil -- but of renewables, like solar.

Bottom line? Oil prices will never return to the levels we saw between 2011 and 2014, when it was selling for about $110 per barrel. Joe's indulging in wild, feckless optimism; either that, or he's been drinking his own Kool-Aid. His numbers are like Madoff's return-on-investment claims -- thoroughly cooked.

And then there are all those things that Joe neglected to mention in his speech. He didn't, for example, explain that the government is effectively abandoning infrastructure investment until 2017, at which point it proposes to come across with chump change. He didn't mention the national yard sale the Harper government has been running to funnel public asset value towards balancing the books. (Selling an asset to balance a budget isn't good management. It's desperation.)

He failed to mention that the Tories have produced just one balanced budget in nine years. And he didn't bring up the fact that the Harper years have added $150 billion to the national debt, $60 billion more than the administrations of Jean Chretien and Paul Martin.

At least Oliver showed a flash of humour when he claimed the Harper government was the only federal government ever to reduce carbon emissions. I guess he forget that the Boss recently said that regulating oil and gas emissions would be a "crazy" economic policy. Anyway, here's what Green Party leader Elizabeth May told me when I asked her about it:

The final item of fiscal trickery in the budget was almost too brazen to imagine. Oliver slyly waited for the new fiscal year before bringing down his budget -- and promptly dumped the government's last remaining shares it held in General Motors as a result of the 2009 auto bailout.

This allowed Oliver to use $2.1 billion to help balance the budget. It was the most expensive $2.1 billion any Canadian government ever made, given that it imposed a $3.5 billion loss on taxpayers in Canada and Ontario. Market analysts thought it was a bad time to sell. Even the CBC's Peter Mansbridge pointed out to Oliver that had he waited just two more weeks to sell, Canada would have received an extra $100,000,000 for the shares. Prudent fiscal management -- or just another costly bonbon for Goldman Sachs, the buyer?

How desperate was Oliver to please the Great Accountant? Desperate enough to do something his predecessor, the late Jim Flaherty, vowed he would never do -- help himself to $3.4 billion from the Employment Insurance operating surplus.

Then he gutted two-thirds of the Contingency Fund that all federal governments put aside for a rainy day, netting him another $2 billion. And lo, a miracle -- the columns in black ink and red ink more or less cancelled each other out.

In the process, Oliver reduced federal revenues to their lowest point in history, gave a $2 billion tax cut to the wealthiest 15 per cent of the population through income-splitting, and handed over another half a billion to those Canadians rich enough to double their contributions to tax-free savings accounts. The best part? It will all be paid for by Canadians, whose consolation prize is getting to watch the social democracy it took us fifty years to build wash away like spring snow.

But I'm the first to admit that there are some winners in Budget 2015. If you're a wealthy CSIS agent with a stay-at-home wife who believes the beheaders are coming to the 905 belt -- this, my friend, is the budget for you.