As I watch the procession for Nelson Mandela, I feel a great sense of loss. I was grateful to learn more about him and the anti-apartheid struggle while in Durban, South Africa for the 2011 UN climate conference. His name carried hope when spoken in the southern townships, as much as it did in the halls of the UN conference. He is great inspiration to our movement. Nelson Mandela is no longer with us in this world, but when celebrating his life's work, we can find lessons that can guide those striving for social change in Canada today. Here are five: 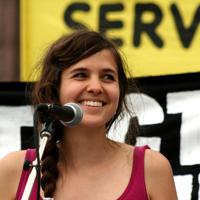 Brigette DePape: Imagine a Throne Speech for the 99 Per cent

1. Racism must be named, and fought.

The anti-apartheid struggle was about a lot of things: tension between economic and political systems, ruling class versus the people, historical tradition versus progress -- but the clearest core of that struggle was opposing flagrant racism.

"We are not anti-white," Mandela declared defending himself against the charge of treason in 1961, "we are against white supremacy... we have condemned racialism no matter by whom it is professed."

One lesson we can learn is that Nelson Mandela was not afraid to name racism as the root of other social ills while standing up to it. This means seeing and calling out structural racism, but also the racism within our movements.

Here in Canada, racism persists and buttresses our own version of apartheid in the eyes of many First Nations people. Indeed, my friend Arnie Nagy who is Haida reminds me that the South African apartheid system was actually premised on the reserve system established here in Canada to segregate indigenous and non-indigenous people.

As Mandela would have noted, structural racism causes and reinforces other injustices in our society. An example would be the profoundly unequal distribution of environmental hazards among the population. When it comes to siting hazardous waste sites, landfills, incinerators and polluting industries, First Nations communities in Canada are over-represented. What's more, First Nations communities are often excluded from those decision making processes. An example would be Sarnia, Ontario, where the Aamjiwanaang First Nation reserve is surrounded by one of Canada's largest concentrations of industry -- including several large petrochemical, polymer and chemical industry plants -- leading to unclean water and severe health problems related to air pollution.

First Nations are not alone in suffering environmental racism in Canada. Recent immigrant communities lacking economic and political clout are also disproportionately impacted. One study found that Enbridge's Line 9 pipeline runs through communities that are 60 per cent recent immigrants.

2. The world is watching.

Canada, which once supported sanctions against apartheid in South Africa, now lags in terms of taking action on climate change and its potentially devastating effects on the world's poorest and most vulnerable.

This prompted South African bishop Desmond Tutu to sign a 2011 letter, along with a half-dozen South African activists and African environmental groups, stating:

"Canada, you were once considered a leader on global issues like human rights and environmental protection. Today, you're home to polluting tar sands oil, speeding the dangerous effects of climate change."

Two years after that letter was published, Canada has yet to deliver on a plan for oil sands emissions regulations -- a promise our nation made seven years ago.

The world is watching Canada with urgency and dread. As Desmond Tutu explains: "For us in Africa, climate change is a life and death issue. By dramatically increasing Canada's global warming pollution, tar sands mining and drilling makes the problem worse, and exposes million of Africans to more devastating drought and famine today and in the years to come."

Nelson Mandela made this clear:

"Overcoming poverty is not a task of charity, it is an act of justice. Like slavery and apartheid, poverty is not natural. It is man-made and it can be overcome and eradicated by the actions of human beings. Sometimes it falls on a generation to be great. YOU can be that great generation. Let your greatness blossom."

Today the greatest threat facing humanity is climate change. Similarly to Nelson Mandela's words about poverty, climate change is not a task of charity, but an act of justice. This point was powerfully made by activist Harsha Walia in a recent article about Typhoon Haiyan. Like poverty, climate change is not natural. It is man-made. Future extreme weather events and the lives and homes lost because of them can be averted by the actions of human beings. This includes drastically reducing greenhouse gas emissions by transitioning away from fossil fuel projects to renewables.

4. We can win by organizing on the frontlines.

The anti-apartheid struggle reminds us that it will take great sacrifices to win. And as Naomi Klein pointed out, the great gift that Nelson left us is that he showed us we can win.

In the face of such forceful intimidation from the state, the anti-apartheid movement's campaign included many different approaches. As Mandela explained in a speech:

"It is the victories of Umkhonto we Sizwe in the battlefield, the organisation of the masses within the townships and the countryside, the sanctions campaign and the willingness of our people to stand firmly against the brutality of the apartheid regime that eventually pushed the regime to the negotiations table."

The future can feel very bleak.

But certainly nothing tests us the way 27 years in prison tested Nelson Mandela. And yet he stayed optimistic.

In his autobiography Long Walk to Freedom, in the chapter about his time imprisoned on Robben Island, Mandela explains, "Part of being optimistic is keeping one's head pointed toward the sun, one's feet moving forward. There are many dark moments when my faith in humanity was sorely tested, but I would not and could not give myself up to despair. That way lay death and defeat."

Let's remember how Mandela would often finish speeches -- with the word amandla. This popular rallying cry during South Africa's resistance to apartheid means "power." Mandela would shout amandla, and the crowd would reply with awethu, meaning "to us."

The power is with us.