During the last throne speech, I held up a Stop Harper sign in Parliament. I'm no longer working in Parliament, but calling all pages -- I've got paint and red paper if you want it! 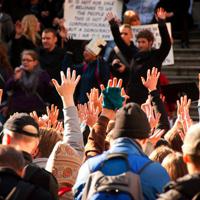 This year's throne speech tried to position the Conservative government as good for "everyday Canadians". But in reality the Conservative agenda has benefitted Canada's richest, not the middle or lower classes.

Prime Minister Stephen Harper is spending over a billion dollars on a Spy Castle made of shiny glass windows, the most expensive Canadian government building ever constructed. Meanwhile, he continues to cut services that the middle class values. Simply look at federal health cuts, which will total $36 billion over a decade.

Journalist Linda McQuaig explains that "all the income gains in past three decades have gone to the top 10 per cent of Canadian income earners, with 60 percent of all income gains going to the top one per cent." Once inflation is factored out, median Canadian income has not increased -- it's actually declined slightly -- over the past three decades.

There are policies that would truly benefit the middle class, like taxing the richest and re-distributing wealth to services we value, as proposed by McQuaig in The Trouble with Billionaires. Or how about the idea of a maximum wage, similar to the idea France has kicked around? That would help us increase the minimum wage.

The government boasts of its consumer-first agenda, hoping to appeal to everyday folks. The effort to re-brand the public as consumers fits well with the neoliberal agenda Harper is aggressively pursuing. As my friend TJ Dawe pointed out, we are increasingly consumers when our social services are cut, because we have to buy them ourselves. It's convenient for the Harper agenda if we are just consumers -- if what we care about is how we spend the money in our own purse, not how the government spends our money.

Stepping into our power

What I found most inspiring since Harper's last throne speech are people stepping into their power as not just consumers, but active decision-makers and influencers on the issues that matter most: young doctors standing up to Minister Joe Oliver after he tried to cut funding to refugee health care; families rising up with the Occupy movement, drawing attention to much-needed system change; and residents demanding a National Housing Strategy to end homelessness, Canada being one of the few countries without one.

Harper talks about Canadian pride, but who can be proud to be from a place that violates the rights of indigenous people? Still, I am hopeful for a different future. We have seen thousands of people take to the streets and join the Idle No More movement, which calls for a complete transformation of the relationship between indigenous people and Canada, one that respects indigenous rights and sovereignty. We have seen candlelight vigils and rallies for the 600 missing and murdered indigenous women in this country.

This great work has paid off. The premiers are now calling for a national inquiry, and yesterday so did UN rapporteur James Anaya. Unsurprisingly, Harper is blocking justice for these women and their families, so far refusing the inquiry.

The belief that Harper is good for jobs and the economy allows him to maintain power. Yet since his election youth unemployment has remained high, and the difference in unemployment rates between youth and adults in Ontario is the highest it has ever been. What about a Ministry of Youth which would create a youth employment plan?

Climate change wasn't mentioned at all in today's throne speech, reflecting Harper's complete lack of action on the urgent global warming crisis. The Conservative minister of the environment admits that climate change is the greatest threat to humanity, but we won't be fooled that he's serious about the issue when his only plan to cut greenhouse gas emissions is in the context of aggressively pushing pipelines and tar sands expansion.

Naomi Klein calls Harper's agenda "extractivism… a single-minded natural resource extraction agenda for which he has sacrificed the manufacturing base of the country and attacked worker's most basic collective rights." But we have seen people of all walks of life risk arrest to protest unsustainable pipelines.

What kind of throne speech would you have wanted?

Now is the time to imagine a bold, sustainable future for this country. Instead of a short-term agenda, we can forge a green labour revolution. We can invest in an alternative energy strategy, with community-controlled alternative energy projects and investments in public infrastructure and transportation. A recent report by the Canadian Centre for Policy Alternatives shows, for example, that would create more and better jobs than the Enbridge pipeline.

Building on UNIFOR President Jerry Dias' proposal, what about a Good, Green Jobs Summit? Did you know that Alberta has the greatest potential for solar energy? And Newfoundland, where many oil sands workers are from, has great potential for wind energy? What if we had a Ministry for Alternative Energy and Green Jobs?

With a Harper majority government it's easy to get discouraged, to feel like giving up. But when I see people who are truly fighting for the middle class, for the 99 per cent, for an end to climate change, then taking back our power back becomes possible.

And our dreams for another way begin to breathe life!