If you want to know what someone really values, don't look at what they say, look at what they do. Take, for instance, how the B.C. government plans to handle the competing needs of fish and the oil and gas industry under the new Water Sustainability Act. 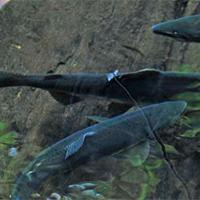 The Fish Protection that Got Away

If you look at what the government says in its 120-page legislative proposal, you'll notice an emphasis on the need to protect fish. But when you examine how the proposed amendments mesh with the existing law, it becomes clear that fish needs will still come second to those of the oil and gas industry. While industry will likely continue to have access to pretty much all the water it wants, fish will have no real legal protection for their water needs.

Oil and gas development is putting tremendous pressure on water resources in many parts of B.C. The liquefied natural gas (LNG) boom is one example. Most LNG production relies on hydraulic fracturing, also known as fracking. It's a process that uses, on average 11 million litres of water per well. Since 2005, more than 7,300 wells have been drilled in B.C., with another 500-1,000 approved each year. And with the government proposing at to get at least three new LNG export terminals into operation by 2020, this pace could increase dramatically.

On top of this, the oil and gas industry is allowed to abuse low-scrutiny, "short-term" water approvals by getting unlimited renewals rather than going through the more onerous licencing process. This practice is so egregious that it's attracted a lawsuit, launched yesterday by my colleagues at Ecojustice. All the while, the government continues to enable users exploiting B.C. water approvals process: Earlier this year, it extended the duration of the permits from one to two years.

Under the Water Sustainability Act proposal, the government intends to reclassify oil and gas water use from general "industry" into a separate class, which would allow the government to apply different standards and pricing for that industry. Given the government's coddling of the industry to date, this is hardly reassuring.

Taken together, the existing law and proposed amendments mean that the oil and gas industry will get special and legally-protected rights to use water, including favorable interpretation and application of the Water Act to ensure continued (and likely increased) access to B.C.'s water.

WEIGH IN ON PROPOSED WATER ACT

There's still time for B.C. residents to weigh in on the proposed Water Sustainability Act. The province has invited the public to comment and is accepting submissions until Nov. 15. Learn more about the issues here.

Hard times for fish in BC

Compare this to what fish get. Under current government policy, the needs are fish are "considered" when water licensing decisions are made. This simply means that the person making the decision has to think about fish, but can then go ahead and give away water the fish need. The proposed legislation would simply formalize this practice by introducing the requirement to consider fish (although exceptions will be made). In other words, the status quo will continue.

While there are also some proposed, discretionary provisions that could be invoked to protect fish in times of scarcity, similar provisions already exist and are rarely -- if ever -- used.

This approach might be defensible if there was some evidence that it actually worked. But this approach hasn't protected fish in the past and won't in the future. Thirty-seven per cent of fresh water fish in B.C. are already red-listed. Meanwhile many water bodies have been licenced for water withdrawals that exceed average flows. You do the math: You don't need to be scientist to know that fish can't survive in dried-up rivers.

The public has made strong, clear calls for legally-binding standards that protect environmental flows -- meaning the life-sustaining water that runs through streams, rivers and lakes and keeps ecosystems healthy. Tellingly, this public input has been ignored.

This is yet another area where B.C.'s approach is completely out of step with how other places are addressing this challenge. A growing number of countries have or will be enacting flow standards including all member states of the European Union, Japan, Mexico, South Africa and Switzerland to name a few.

Similar efforts are ongoing in the United State, including in the neighbouring state of Washington. Even places not known for being particularly environmentally-progressive, such as Florida, have taken steps to address flow concerns.

The lack of real, binding, legally enforceable protections for fish and the environment is, in my mind, the single biggest problem with the proposed Water Sustainability Act. Environmental flows are critical to the healthy function of watersheds and must be clearly prioritized over other non-essential human uses. The Water Sustainability Act must explicitly set aside an ecological reserve of water that is not available for any use other than the conservation and maintenance of fish habitat and preservation of ecosystems.

A good first step would be amending the Water Act to ensure that environmental flows will are legally-protected and have priority over commercial users. Second, we need a commitment that the flows themselves will be determined by a scientifically-defensible methodology (not the guesses of industry consultants and bureaucrats) and public input.

Respected American jurist Oliver Wendell Holmes wrote that "a river is more than an amenity, it is a treasure." Holmes wrote this in 1931. Sadly, the B.C. government has yet to realize this in 2013.

This is the third of four pieces in this series prepared by Ecojustice. Tomorrow: What happens if B.C. is tapped dry? Find the entire series so far here.