Maybe the inventors of Monopoly were onto something when they called their second most expensive property Park Place, because car storage is surprisingly costly. 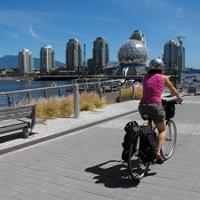 We think of it as cheap, because we so rarely pay for parking at the time when we are using it. More than 90 per cent of the time, our cars end their trips in spaces for which there is no charge.

But just because we're not paying as drivers does not mean we are not paying in other ways -- as residents, employees and shoppers, for example. The costs of parking are concealed in higher rent and housing costs, lower profits and wages, and higher prices. We rarely think about the costs of parking, because parking itself is so ubiquitous. Because of city off-street parking mandates in land-use codes, it's so commonplace we hardly notice it.

Just how much parking do we have, and how much does it cost?

To make a long story short, parking probably covers 10 to 20 per cent of the area of cities in the Northwest. Cascadia likely has more than 29 million spaces, and their average value is more (probably much more) than $5,000. That's $145 billion of parking regionwide. For each car in the Northwest (average Blue Book value under $8,000), the region has at least 2.2 parking spaces. Their combined value is at least $11,000. Our car storage spaces are worth more than our cars.

This estimate is probably conservative. Still, if we assume only 2.2 spaces per vehicle not only in Greater Vancouver, which is the least auto-oriented of the region's metro areas and therefore likely has less parking, but in all of British Columbia, Idaho, Oregon, and Washington; then Cascadia overall has 29 million parking spaces for its 13 million motor vehicles. At a typical size per space of approximately 29 sq. metres (including access and maneuvering space), that's 875 sq. kilometres of parking -- more than the areas of Portland, Seattle and Vancouver combined. In short, even on conservative assumptions, we have oceans of parking. It may not seem that way, because parking is scattered across the landscape in ones and twos and clusters and lots.

By one set of estimates from the 1990s, if you took all of Portland's downtown parking lots, garages, and curb spaces and spread them out on the ground, the resulting super-lot would cover 46 per cent of downtown Portland. If you did the same thing in Vancouver, it would cover 42 per cent (as indicated on pages 162-163 of the book The High Cost of Free Parking).

Of course, downtowns are small, and they are magnets for cars. What about citywide?

In Seattle, about five per cent of all land -- one twentieth of the city -- is curb parking, according to University of Washington architecture professor Rick Mohler. (Donald Shoup, a UCLA urban planning professor, suggests that curb parking typically consumes five to eight per cent of city land, and Seattle has a dense street grid compared with many places, so Mohler's estimate may be conservative.)

Seattle's half-million curb slots may account for half its total spaces, yet on-street spaces actually require less land than other spaces because the traffic lanes serve as driveway and maneuvering room. Mohler assumed just 160 sq. feet (approximately 14.5 sq. metres) per curb space. A typical off-street parking space in a lot or garage requires twice that much area or more. If the other half of Seattle's parking requires twice as much area per space, then it takes 10 per cent of Seattle's area, for a total of 15 per cent of the city devoted to parking.

On the other hand, a small share of parking is "stacked" in garages and does not make exclusive use of land: the same land may support three levels of parking and several floors of office space, for example. Thus, Seattle likely devotes 10 to 15 per cent of its land to parking, and the figure is likely closer to 15 than to 10 per cent. As a crude estimate, I'll say 13 per cent.

Seattle proper is among the least auto-oriented parts of Cascadia, so other jurisdictions likely devote more land per resident to parking. Off-street parking has dominated the site plans of most commercial developments since the Second World War. In Olympia, Washington, for example, lots zoned for commercial development are covered by 53 per cent parking and driveways and 26 per cent buildings (see pages 134-135).

TransLink inventoried off-street, non-residential parking in 2005 and estimates in a recent report that it covers 3.7 per cent of urbanized land in the Vancouver metropolitan area overall, 8.6 per cent of the city of Langley; 6.8 per cent of Richmond; 6.6 per cent of Burnaby; 3.7 per cent of Vancouver; and 2.7 per cent of Surrey. Combining the area of parking at curb spaces and residential spaces with these tallies would likely show that cities such as Langley and Richmond devote a larger share of their land to parking than Seattle. In suburban cities in the United States, which sprawl more than Vancouver's suburbs do, the figure may be higher still, possibly as high as 20 per cent.

Adding it all up, parking likely occupies 10 to 20 per cent of city land in Cascadia.

How much are those spaces worth? The value of the land under them alone is worth billions of dollars. The Right Size Parking study, sponsored by King County, reports appraised land value for multi-family buildings at well over $100 per square foot. The weighted average of Seattle properties in the survey was $134 per square foot, for example. But King County is expensive compared with other parts of Cascadia. To be cautious, let's assume regionwide land values in multi-family zones of just $50 a square foot. At that value, a single apartment parking space -- 325 sq. feet (29.25 sq. metres), including circulation space -- is worth $16,250 for the land alone.

That figure may overestimate the value, because it assumes all parking is in surface lots, which it is not. Some parking is stacked and therefore uses less land. On the other hand, where parking is not on the surface, construction costs dramatically push up its value. Even a surface space typically cost $3,000 to build in the 2000s. Garage parking, especially if it's underground, can cost tens of thousands of dollars per space to build. The City of Seattle paid $61,000 to construct each of the underground slots in the Pacific Place shopping centre (see page 190). On net, the Northwest's off-street parking spaces at multi-family buildings may average more than $20,000 apiece, counting both land value and construction cost.

The average resale value of cars in the existing fleet in the United States is probably under $8,000. It was $5,500 in 1997, the most recent year for which I've been able to find data (see page 208). Adjusted for the rising cost of new cars (a better measure of changing vehicle values than overall inflation), that's about $7,600 today. To check this figure, I contacted three experts in transportation economics. They offered back-of-the-envelope estimates that all came in well under $8,000.

But even if we cautiously estimate that each Cascadian parking space is worth only $5,000 on average -- assuming cheap land and much-depreciated construction costs -- parking is still more valuable than cars. After all, parking spaces outnumber cars. If we accept that we have only 2.2 parking spaces per vehicle in the Northwest (a conservative ratio), that's still $11,000-worth of parking for each the region's vehicles, each of which is worth less than $8,000 on average.

One final number flows from the other conservative estimates: If the Northwest has 29 million spots and each is worth $5,000, that's $145 billion worth of parking.