A background paper titled Climate Change and Forced Migration: Canada's Role was prepared for Canada's Parliament in 2010 by its Industry, Infrastructure and Resources Division. Excerpts:

"It is impossible to predict with any degree of certainty how many additional people each year will need resettlement due to the effects of climate change. However, it seems certain that climate change will be the source of additional pressures on Canada's humanitarian immigration program to expand, perhaps substantially, in the coming decades.

"To the extent that refugees are able to integrate into the Canadian labour market and society, Canada may stand to gain from a new influx of migrants. But, there are costs associated with helping newcomers to integrate into Canadian society, especially in cases where skills are not relevant or recognized in the Canadian job market, and where newcomers speak neither English nor French....

"Best estimates suggest that hundreds of millions of people could be on the move in the coming decades due to the impacts of climate change. Canada has an opportunity now to plan an orderly and effective response to the coming crisis." 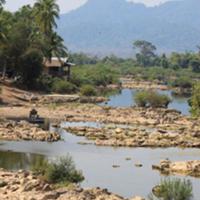 The modern world has long thought of refugees in strictly political terms, victims in a world riven by competing ideologies. But as climate change continues unabated, there is a growing population of displaced men, women and children whose homes have been rendered unlivable thanks to a wide spectrum of environmental disasters.

Despite their numbers, and their needs, most nations refuse to recognize their status.

The 1951 U.N. Convention relating to the Status of Refugees defines a refugee as a person with a genuine fear of being persecuted for membership in a particular social group or class. The environmental refugee -- not necessarily persecuted, yet necessarily forced to flee -- falls outside this definition.

Not recognized, not counted

Where the forest used to be, torrential rains bring barren hills of mud down on villages. Crops wither in the parched earth. Animals die. Melting glaciers and a rising sea swallow islands and low-lying nations, flooding rice fields with salt water. Factories spew toxic chemicals into rivers and oceans, killing fish and the livelihood of generations.

So people flee. Many become internally displaced, others cross any and all borders in order to survive.

Experts at last year's American Association for the Advancement of Science (AAAS) estimated their numbers would reach 50 million by 2020, due to factors such as agricultural disruption, deforestation, coastal flooding, shoreline erosion, industrial accidents and pollution.

Today, it is believed that the population of environmentally displaced has already far outstripped the number of political refugees worldwide, which according to the United Nations High Commissioner on Refugees (UNHCR) is currently at around 10.2 million.

In 1999 the International Red Cross reported some 25 million people displaced by environmental disasters. In 2009 the UNHCR estimated that number to be 36 million, 20 million of whom were listed as victims of climate change-related issues.

More accurate statistics, however, are hard to come by.

Because the term "environmental refugee" has not been officially recognized, many countries have not bothered to count them, especially if the population is internally displaced. Other countries consider them migrants, and often undocumented immigrants, and therefore beyond the protection granted refugees.

Another factor obscuring the true scope of the population is the fact that their numbers can rise quite suddenly -- such as after the Fukushima nuclear disaster last year, or Haiti's 2010 earthquake, which in a matter of hours displaced more than 3 million people.

A 'hidden crisis' no more

Two decades ago, noted ecologist Norman Myers predicted that humanity was slowly heading toward a "hidden crisis" in which ecosystems would fail to sustain their inhabitants, forcing people off the land to seek shelter elsewhere. With hurricanes Katrina and Rita, that crisis became painfully obvious.

Along with images of hundreds of thousands of displaced Americans scurrying across the richest nation on Earth searching for new homes came an awareness that no matter how wealthy or powerful, no country is impervious to the threat of climate related catastrophe.

Indeed, being displaced by natural disasters may very well become the central epic of the 21st century. Kiribati, the Maldives and Tuvalu are disappearing as we speak, as the sea level continues to rise. The World Bank estimates that with a one meter rise in sea level Bangladesh -- with a population of 140 million -- would lose 17.5 per cent of its land mass and along with it river bank erosion, salinity intrusion, flood, damage to infrastructures, crop failure, destruction of fisheries and loss of biodiversity.

Those who have already fled the country to neighbouring India -- largely because of flooding -- face lives of immense misery and discrimination.

China, in particular, is a hot spot of environmental disasters as it buckles under unsustainable development, giving rise to rapid air pollution and toxic rivers. Alongside desertification, these man-made catastrophes have already left millions displaced.

John Liu, director of the Environmental Education Media Project, spent 25 years in China and witnessed the disasters there. He offered the world this unapologetic, four-alarm warning some years ago:

"Every ecosystem on the planet is under threat of catastrophic collapse, and if we don't begin to acknowledge and solve them, then we will go down."

When President Obama granted temporary protected status (TPS) to undocumented Haitians living in the United States in the aftermath of the earthquake in Haiti, it was a step in the right direction.

After all, repatriating them back to an impoverished nation devastated by one of the worst-ever recorded disasters would be immoral at best, and at worst, a crime against humanity.

Sadly, such actions are rare and when they do come, they manage to address barely a fraction of the pressing legal and humanitarian needs of the growing population. What solutions do exist, experts agree, must recognize that the needs of environmental refugees are one and the same as those of our planet.

Policies toward climate refugees should therefore include issues of reforestation, re-habilitating degraded land and soils, and desalination of low coastal areas. And the International Court of Justice should also step up its efforts to prosecute those responsible for man-made environmental disasters such as illegal mining, deforestation and dumping of toxic waste.

"One of the marks of a global civilization is the extent to which we begin to conceive of whole-system problems and whole-system responses to those problems," noted political scientist Walt Anderson in his book All Connected Now. "Events occurring in one part of the world," he argued, "are viewed as a matter of concern for the whole world in general and lead to an attempt at collective solutions."

Whether humanity can move toward that vision depends largely on how it responds to the central issue of our time.

"A rising tide lifts all boats." But in the age of melting glaciers, that tide is an ominous threat driving more refugees to flee and, if ignored, swallowing humanity itself.