It's a foolish pilot who flies into a gathering storm. Yet that's exactly where the Harper government is headed with its plan to replace Canada's CF-18 fighter jets. As Associate Defence Minister Julian Fantino told an audience in Texas earlier this month: "We will purchase the F-35. We're on record. We're part of the crusade. We're not backing down." 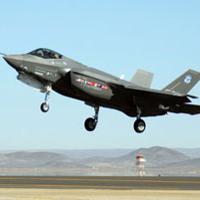 Stand on Guard for Creeping Militarism

The F-35 has already hit turbulence in the US, with Defence Secretary Leon Panetta threatening to cancel the program if Republicans and Democrats failed to agree on a deficit-reduction plan this week.

Panetta only retreated when it became apparent that the deficit negotiations would fail, stating last Friday that the U.S. "needed" the F-35.

Still, it's hugely significant that the defence secretary would even voice such a threat. Lockheed Martin, the maker of the F-35, has repeatedly failed to meet its delivery and budget targets. According to the US Government Accountability Office, test planes are achieving only 2-8 flights per month, far short of the goal of 12 monthly flights.

At the current rate, Canada will not receive its full complement of F-35s until years after the CF-18s are retired. Just as worrisome is the fact that the first F-35s delivered to Canada will lack the technology necessary to communicate in the Arctic and to track troops on the ground -- with the latter function being essential to preventing casualties from "friendly fire."

With every delay comes increased costs: in the past decade, the F-35 program has exceeded Lockheed Martin's budgeted projections by 64 per cent.

The Canadian government claims it will only have to pay $75 million per plane. Yet it is inconceivable that a cash-strapped U.S. Congress would tolerate a multi-billion dollar subsidy to Canada. The Pentagon has earmarked $151 million for each of its planes, while the US Government Accounting Office is projecting an actual cost of $156 million.

The delays and cost overruns have caused Senator John McCain to say that the U.S. government has "to start considering alternatives" to the F-35. If the U.S. pulls out, the F-35 program is finished; if it reduces its order, the cost per unit will skyrocket.

Check out other 'craft

Fortunately for Canada, other, already proven aircraft could fulfill our needs even better than the F-35, and at a much lower price.

For example, Boeing's F/A-18E Super Hornets already fly for the U.S. and Australia, and cost just $55 million each. As the latest version of the CF-18 series, they also offer greatly reduced training costs to Canada.

The twin-engine Super Hornets are more suited for the Arctic than the single-engine F-35s. Canada chose the two-engine CF-18s in the 1980s because of concerns that a single-engine would put pilots and planes at risk in remote locations.

Although F-35s have stealth technology, the deployment history of Canada's CF-18s calls into question our need for covert planes.

The CF-18s have only occasionally served overseas: a small number were based in Germany until 1990; 24 served in the 1991 Gulf War; 18 were involved in Kosovo in 1999; and seven were sent to Libya earlier this year.

In the three latter "hot conflicts," Canadian aircraft were sent into action only after our allies had destroyed the enemy's air defences. In Libya, this initial phase was conducted using British and American cruise missiles as well as American B-2 bombers -- and not the five year-old F-22 stealth fighters that the U.S. possesses but did not even deploy.

Stealth technology would actually be a negative for Canada, since it entails compromises with respect to other capabilities.

Lockheed Martin admits that the F-35 will have a top speed of only Mach 1.6; Super Hornets and CF-18s, in comparison, both top out at Mach 1.8.

Stealth necessitates that missiles and bombs are stored internally, thereby limiting the munitions carrying capacity of the F-35.

Finally, stealth technology is maintenance intensive and results in a much lower "mission capable rate."

Other countries are already retreating from the F-35. Britain has reduced its order from 140 to 70 planes. Australia, which was planning to purchase 100 F-35s, recently decided to acquire 24 new Super Hornets -- thus buying itself time to reassesses the situation. Japan has pitted the Super Hornet against the F-35 in a competitive procurement process, which the lower cost plane will almost certainly win.

Canada, likewise, could save billions of dollars by opting for another plane. As Parliamentary budget officer Kevin Page has noted, "Canada has not signed any binding contract for acquisition, nor is it under any legal obligation -- international or otherwise -- to go ahead with the purchase."

Since 1997, Canada has contributed just $168 million towards F-35 research and development, and not as a down payment against future purchases. As a result, we could pull out of the F-35 program, having paid less than the cost of acquiring and maintaining a single plane.

Last week, Defence Minister Peter McKay dismissed concerns about the F-35 as "clatter and noise." A good pilot, however, would pay attention and change course -- before his wings fall off.