The events in Tunisia and Egypt have riveted the region and the world. The eruptions of people power have shaken and taken down the seeming unbreakable edifices of dictatorship. (At the time of writing, Mubarak has not formally acknowledged that he has been toppled, but the force of the movement is too powerful and determined to fathom any other outcome.) Events are moving at breakneck speed and a new narrative for the future is swiftly being written. 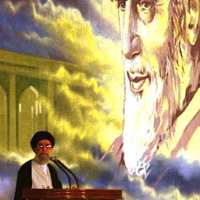 In the throes of a changing future it merits returning to the stories of two young men, the two faces that stoked the flames of revolution thanks to the persistence of online citizen activists who spread their stories. For in the tragic circumstances surrounding their deaths are keys to understanding what has driven throngs of citizens to the streets demanding the end to dictatorship, and the ushering of a new age of freedom based on principles of civil rights and political and economic justice.

Mohammed Bouazizi has been dubbed "the father of Arab revolution"; a father indeed, despite his young years and state of singlehood. Some parts of his life are by now familiar. This 26-year-old left school just short of finishing high school (he was not a college graduate as many new stories have been erroneously reporting) and worked in the informal economy as a vendor selling fruits and vegetables to support his widowed mother and five younger siblings. Overwhelmed by the burden of fines, debts, the humiliation of being serially harassed and beaten by police officers, and the indifference of government authorities to redress his grievances, he set himself on fire. His mother insists that though his poverty was crushing, it was the recurrence of humiliation and injustice that drove him to take his life.

The image associated with Mohammed Bouazizi is not that of a young man's face, but of a body in flames on a public sidewalk. His self-immolation occurred in front of the local municipal building where he sought, but never received, justice.

The story of 28-year-old Egyptian Khaled Said went viral immediately following his death by beating on June 6, 2010. Two photos of him circulated the blogosphere and social networking sites. One was a portrait of his gentle face and soft eyes coming out of a youthful grey hooded sweatshirt; the face of an everyday male youth. The accompanying photo was of the bashed and bloodied face on the corpse of a young man. Though badly disfigured, the image held enough resemblance to the pre-tortured Khaled to decipher that the two faces belonged to the same person.

The events leading to Khaled's killing originated when he posted a video of two police officers allegedly dividing the spoils of a drug bust. This manner of citizen journalism has become commonplace since 2006. Youths across the region have been emboldened by a famous police corruption case of 2006. An activist posted a video on YouTube of two police officers sodomizing and whipping a minibus driver, Emad El Kabeer. It not only incensed the public and disgraced the perpetrators, but led to their criminal prosecution.

On June 6, 2010, as Khaled Said was sitting in his local internet cafe in Alexandria, two policemen accosted him and asked him for his ID, which he refused to produce. They proceeded to drag him away and allegedly beat him to his death as he pleaded for his life. The officers claimed that Khaled died of suffocation when he tried to swallow a package of marijuana to conceal drug possession. But the power of photographic evidence combined with eyewitness accounts and popular knowledge of scores of cases of police brutality left no doubt in anyone's mind that he was senselessly and brutally murdered by the police, those who were entrusted by social contract to protect them. The court case of the two officers is ongoing. 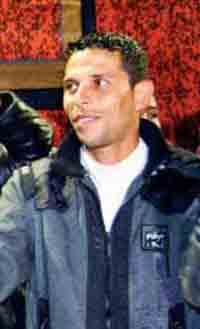 Mohammed Bouazizi was not the first person to resort to suicide by self-immolation out of desperation; there has been an alarming rise in such incidents in different Arab countries. And Khaled Said is sadly one of scores of citizens who have been tortured, terrorized, and killed by police with impunity. But the stories of these two young men are the ones that have captured the popular imagination, they have been game changers.

For the youth of Egypt and Tunisia, the largest cohort of young people ever in their countries, the martyrdoms of Khaled Said and Mohamed Bouaziz represent an undeniable tipping point, the breaking of the fear barrier. The youth have banned together as a generation like never before and are crying out collectively, "Enough is enough!" to use the words of a 21-year-old friend, Sherif, from Alexandria. The political cartoon of Khaled Said in his signature hoodie shouting to the intelligence chief, also popularly known as "torturer in chief" and now Mubarak's vice president, to "Wake up, Egypt!" perfectly exemplifies this mood (from the Facebook group, "We are all Khaled Said"). No longer will the youth cower to authority figures tainted by corruption and abuses. These illegitimate leaders will cower to them. The order of things will change. 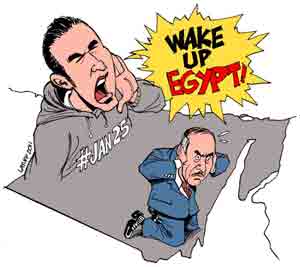 Political cartoon from the Facebook group "We are all Khaled Said."

And so on Jan. 25, 2011, inspired by the remarkable and inspiring revolution in Tunisia that toppled the 23-year reign of the dictatorship of Zine El Abidine Ben Ali, Egyptian youth saw it was possible to topple their dictator, Hosni Mubarak, of 31 years. Activists used different online platforms, most notably the April 6 Youth Movement and the "We are all Khaled Said" Facebook group to organize a national uprising against "Torture, Corruption, Poverty, and Unemployment." 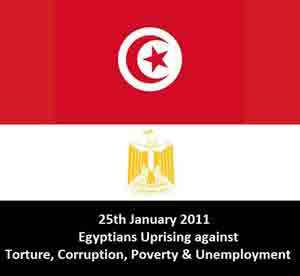 Banner of a national uprising in Egypt.

It is not arbitrary that civil rights, as exemplified in torture and corruption (recall Khaled Said), topped the list of grievances, followed by economic problems. For youth unemployment and underemployment will, under any regime, be among the greatest challenges of the times.

No one could have anticipated that this initial call would heed such mass and inclusive participation. Youths initially came to the streets braving tanks, rubber bullets, tear gas (much of which is made in the U.S. and part of U.S. military aid, incidentally), detention and even death. And they were joined by citizens of all persuasions and life stages: children, youth, elderly, middle-aged, female, male, middle class, poor, Muslim, Christians, Atheists.

Contrary to a number of commentators in news outlets in North America and parts of Europe, the two revolutions overtaking North Africa are not motivated by Islamism and there are no compelling indications that it will be co-opted in this direction. Such analyses are likely to be either ideologically driven or misinformed. In fact, Islam has not figured whatsoever into the stories of Bouazizi and Said. These are inclusive freedom movements for civic, political, and economic rights.

To understand what is driving the movement and what will invariably shape the course of reforms in the coming period, we need to return to these young men. Their evocative if tragic deaths speak reams about the erosion of rights and accountability under decades of corrupt dictatorship, about the rabid assault on people's dignity. They remind us of the desperate need to restore a political order that is just and an economic order that is fair. Mohamed Bouazizi and Khaled Said have unwittingly helped to pave a way forward, and to point the way to the right side of history.