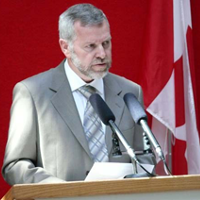 How does a man accused of manslaughter in the mass murder of six people in Surrey get released on bail?

How does an alcoholic man who killed two women and injured seven when he drove his truck into a Maple Ridge sushi restaurant not only get released early from a psychiatric hospital -- but be given back his driver's license?

The answer is the same -- because legal authorities said so.

But justice was not done.

Sek is one of six men alleged connected to the Red Scorpions gang charged in the killings, including Jamie Bacon, who faces one count of first degree murder, and Dennis Karbovanec, who pleaded guilty last year and is serving a life sentence.

And also on Friday, Brian Irving was released from Colony Farms Forensic Psychiatric Hospital into the community, this time against the recommendation of a hospital psychiatrist who wanted him kept there another year, by the British Columbia Review Board.

Irving was found not criminally responsible for killing Simon Fraser University student Maija-Liisa Corbett, 19, and 46-year-old Hyeshim Oh when he drove his pickup truck at high speed into Halu Sushi in Maple Ridge on Aug. 28, 2008.

Back behind the wheel

Irving faced two second-degree murder and six attempted murder charges, but those were reduced to criminal negligence causing death and criminal negligence causing bodily harm, not that it made any difference. That's because Irving pleaded not guilty by reason of mental disorder -- two psychiatrists testified he was suffering from delirium due to alcohol withdrawal and did not know what he was doing.

That despite killing two and injuring seven people -- including 11-year-old Joel Corbin, who suffered brain injuries, and his sister Juanita, who suffered serious injuries like broken facial bones.

And now Irving is free to drive again -- because the Review Board did not place any restrictions on his driver's licence.

Steve Brown thinks all of this is insane. I think it's criminal.

Brown's brother-in-law Ed Schellenberg was an innocent victim of the slayings in Surrey, along with Chris Mohan. Both got in the way of a gang hit on four other men in a Balmoral Towers suite.

"We just keep seeing these endless decisions in favour of the criminals," Brown said in an interview. "Too few judges can balance the rights of the accused and the rights of society to public safety and justice."

And Brown also blames the B.C. Liberal government for not taking action.

"The bigger issue is the complete and utter silence of this B.C. Liberal government on public safety. Where are they?" Brown asked.

"Has Premier Gordon Campbell followed through with his promise last February of 10 gang prosecutors and 168 new police?" Brown said. "I think he knew all along he would never be able to afford it."

"There's so much contempt for law abiding citizens -- from this government, from the judiciary and from the bad guys," Brown said.

"This B.C. Liberal government has brought politics down to a new low," Brown says, but he isn't exactly happy with the New Democrats either. "We have an ineffective opposition and Campbell is just an emperor."

Brown is deeply concerned that Sek -- who was arrested one day after winning $364,364 in a poker championship at Richmond's River Rock Casino -- is potentially a flight risk.

"The families of the Surrey Six -- the victims -- must be concerned about anything that jeopardizes justice," Brown says.

Unfortunately justice is being jeopardized daily in this province. And it's disgusting that our government leaves it to the victims of crime to say so.