Today’s B.C. budget indicates no change in its approach to the worsening toxic drug crisis despite unprecedented deaths and calls for bold spending to expand safe supply.

The budget stays the course on current funding plans for treatment and recovery programs, and does not include new spending for safe supply, which advocates say has become more urgent in the last year.

It promises $164 million over the next three years for complex care housing to support about 500 more people with intersecting mental health, brain injury and substance use needs, as well as those transitioning out of incarceration and residential treatment programs.

“This first-of-its-kind approach will help stop the cycle of evictions, shelters, emergency rooms and jails for hundreds of people with complex care needs,” said Finance Minister Selina Robinson from the legislature.

The budget also increases the Ministry of Mental Health and Addictions’ budget from $21 million to $25 million for the next three years to keep up with staffing needs.

Funding for mental health and substance use services is administered mostly through the Ministry of Health.

“Our government is tackling this head on with the largest investment in mental health and addictions services in B.C.’s history,” said Robinson. “Despite heroic efforts from those working on — and working in — this new system, the poisoned drug supply continues to claim lives.”

Robinson mentioned safe supply, a form of harm reduction that aims to separate substance users from the poisoned illicit supply by providing untainted substances, in passing.

The illicit drug supply is now so poisoned that anyone who uses substances even infrequently or casually is at risk.

“Not all drug users have an addiction,” said Guy Felicella, a peer advisor at the BC Centre on Substance Use, earlier in February. “We need heroin to be accessible and central to safe supply, we need to start trying to change policies, not the people impacted.”

Last year’s budget allocated $500 million for mental health and substance use over the next three years. That included $45 million for harm reduction, including some prescribed safe supply pilots. Many advocates and experts have called for a non-medical model of safe supply due to physician hesitance to prescribe many substances.

She said evaluation is “baked into” the 105 new beds being opened and that she would be working on strengthening monitoring for treatment and recovery facilities, which was largely deregulated under the BC Liberal government.

“We do have further work underway to make sure that patients and families can be really confident about the quality and consistency of care that they're going to get in treatment and recovery,” said Malcolmson.

Felicella and public health experts have cautioned against an approach focused solely on treating diagnosed addiction, when the poisoned and unpredictable supply makes it impossible for anyone to know what they are taking.

The poisoned drug supply also raises the likelihood of death if someone begins to use again after a period of abstinence, required by most recovery programs.

“If we can separate people from it and provide a supply that is regulated, then that will save lives,” said Chief Coroner Lisa Lapointe in an interview earlier this month.

But this figure includes pharmaceutical alternatives to illicit drugs aimed at withdrawal management, not direct replacements. About 30 per cent of these medications were replacement stimulants and benzodiazepines from March 2020 to December 2021, according to a statement from the ministry. The remaining 70 per cent were opioid substitutes like hydromorphone and alcohol withdrawal substances.*

Lapointe, whose office is responsible for reporting toxic drug deaths, has stressed repeatedly since December 2021 that safe supply “does not exist on a scale commensurate with the crisis.”

“What we’ve tried hasn’t worked, so let’s be brave and bold enough to try something different,” she said. 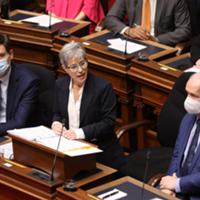 When asked why the province is still pursuing a prescriber-based model of safe supply when doctors and nurse practitioners have expressed hesitance to prescribe the needed substances, Malcolmson said she was committed to building the necessary confidence in the medical community.

“I'm talking with health authorities about barrier identification, and then working to remove them, and will continue to use what’s within our provincial jurisdiction, which is prescribed safe supply,” she said.

Asked whether the province’s performance should be judged based on how many people are dying or another way, Malcolmson did not directly answer.

“Both things are true. The drugs are more toxic and more people are dying, and we're building that system of care,” she said. “We have never had more people working to save lives from toxic drug poisoning.”

* Story updated on Feb. 23 at 9:32 a.m. to reflect new information from the Ministry of Mental Health and Addictions.