“A key component of what guided our government’s thinking is that the state of our economy is not only about our economic growth and our fiscal strength,” Robinson said, “but also how that growth in the economy is shared throughout the province and how that fiscal strength is used to reflect the values of our province.”

Budget documents show that three-quarters of the way through the current fiscal year, with the COVID-19 pandemic continuing, the province’s finances are better than expected.

Largely thanks to increased revenues from corporate, sales and carbon taxes, a projected $9.7-billion deficit has shrunk to $483 million, with another $4.25 billion in pandemic recovery contingencies and forecast allowance still available.

For the fiscal year that starts April 1 the government is expecting to collect $68.6 billion in revenue and spend $71 billion. The budget includes another $4.9 million for contingencies and other possible spending, resulting in a forecast deficit of $5.5 billion.

It includes stable funding for about 50 community-based sexual assault response organizations and 15 First Nations primary care centres throughout the province, and $633 million over three years “towards providing services and supports for people experiencing or at risk of homelessness.”

Speaking to reporters, Robinson said that youth leaving government foster care are at significantly higher risk of experiencing homelessness and need increased support. “Parenting responsibilities don’t end when a child turns 19, nor do government’s responsibilities to young people in its care,” she said.

The budget includes $35 million over three years so that youth will be supported until they turn 27 as they transition out of care.

There is also, with support from the federal government, spending to add 40,000 child care spaces over the next seven years, with families paying an average of $20 per day per child for care by the end of 2022.

“This is going to make a real difference for families,” Robinson said, adding that it helps build a more resilient economy by allowing more people, especially women, to participate in the paid labour force.

The budget adds $166 million to the government’s affordable housing plan, which will have an annual investment of $1.2 billion by 2025.

Despite inflation running at about 4.3 per cent in the province, the budget includes no increase to income and disability assistance rates.

The executive director of the Homelessness Services Association of BC, Stephen D’Souza, said that it was great to see money in the budget to expand the complex care program, but that overall the government could do more.

“I think they’re a good start,” he said. “There’s a lot more that needs to be done, particularly upstream in terms of more supportive housing.”

While it was exciting to see the investment in supporting youth aging out of care, D’Souza said, frozen income and disability assistance rates are short of what’s needed for people to find housing.

“It already wasn’t livable,” he said, adding the rates should be tied to inflation.

Jill Atkey, the CEO of the BC Non-Profit Housing Association, said, “For us in affordable housing it was a bit of a mixed bag.”

While the expanded supports for people experiencing homelessness are welcome, she said, her organization had wanted to see the province accelerate its 10-year-plan to provide affordable housing.

The non-profit and co-op housing sector has 10,000 units of housing ready to be built, but they need $4.2 billion in funding, she said, adding the government’s approach fails to recognize the scale of the problem.

On the environmental side, there’s support for electric vehicle purchases, the removal of the provincial sales tax on purchases of heat pumps and an increase to 12-per-cent PST on heating equipment that uses fossil fuels.

There’s $30 million to provide grants “to local governments to improve active transportation infrastructure, like bike lanes and multi-use pathways” and $76 million for a Local Government Climate Action program to help reduce emissions and prepare for and adapt to climate change.

Over the three years of the fiscal plan there’s $2.1 billion for responding to climate-related disasters, including money for communities to prepare for and manage emergencies and for the wildfire service to become an organization that works year-round on a proactive approach.

There’s also $185 million to help workers and communities affected by the government’s deferrals of old-growth logging, including up to $75,000 for eligible forestry workers who are more than 55 years old to transition to retirement.

Paul Kershaw, the founder of Generation Squeeze and a public health professor at the University of British Columbia, said the government has shown it can find money to address the pandemic, but there are other longstanding crises that need more attention.

“Whether it’s in trying to fight housing unaffordability, or the crisis around child care unaffordability, or climate change, the numbers show clearly these are lower-level priorities in the 2022 budget,” he said. “I think we don’t have a government right now that’s wanting to take the measures to cause home prices to stall in order to restore affordability.”

Meanwhile the spending on health care continues to increase substantially, without spending on all of the services that could prevent later crises, Kershaw said.

Other notable spending in the budget includes $12 million over three years to create a Declaration Act Secretariat to guide and assist the government as it continues its work in consultation with Indigenous peoples to make B.C.’s laws consistent with the United Nations Declaration on the Rights of Indigenous Peoples. 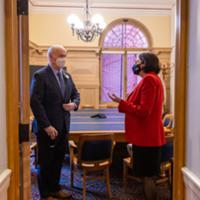 A new ministry of land, water and resource stewardship will receive new funding of $44 million as it splits from the Ministry of Forests, Lands, Natural Resource Operations and Rural Development. The new ministry is supposed to take a leadership role as it works with Indigenous governments and organizations to develop new vision and policies and bring natural resource policy in line with the province’s Declaration on the Rights of Indigenous Peoples Act.

Robinson said the budget is part of standing together as people recover from the COVID-19 pandemic, as well as climate disasters including floods and wildfires. “Our balanced approach makes the investments necessary to respond in a fiscally responsible manner,” she said.

Including capital spending on schools, hospitals, transit and other infrastructure, the province’s total taxpayer supported debt is projected to increase from $61.7 billion to $90.8 billion by 2025. With current low interest rates, the province spends about three cents of every dollar of revenue servicing the debt.