Tenants of an East Vancouver rooming house that receives funding from BC Housing say they’ve been living with broken windows in their rooms for as long as two years, despite asking repeatedly for repairs.

Both windows The Tyee observed on visits to the Flint Hotel at 1516 Powell St. did not have any glass in the frame, putting the tenants’ rooms open to the elements.

Erika Breau and Craigh Pushie, who live together in a room on the third floor, have patched their broken window with particle board taken from the back of a dresser. Breau and Pushie said the window was broken about 18 months ago during a period when they were living in a different room in the building.

The couple said they have asked repeatedly for the window to be fixed. When temperatures dropped in September, they went for the homegrown repair.

“It was really cold out and we were sitting in our room,” Breau said. “We were freezing.”

On the fourth floor, Clint Randan has the same problem. He said he doesn’t know how the window got broken two years ago, but rooms are often broken into and his door currently doesn’t have a working lock.

City of Vancouver staff say that building inspectors discovered six broken windows in the Flint during an inspection in September, and ordered the windows be repaired within 30 days of the inspection.

Atira Property Management Inc., which operates the building, says Randan, Breau and Pushie didn’t report the broken windows and staff only found out about them during an inspection in September.

Demi Tioluwani, a media relations specialist with Atira, said that repairs were ordered immediately as soon as the broken windows were discovered, and the windows are expected to be fixed this week.

But Breau and Pushie said they first let their building manager know about their broken window in the summer of 2020 and have repeatedly asked when the window will be fixed since then.

Randan said he’s been living in a tent in city parks to get a break from living in the Flint, and his girlfriend no longer lives at the building because she didn’t feel safe.

Breau also said the Flint is not safe, especially for women. Around a year ago, she said two people armed with bear spray and a machete broke into her and Pushie’s room and robbed them.

Like most other single-room occupancy hotels in Vancouver, the building has shared bathrooms and tiny, 100-square-foot rooms with no kitchens. Breau said men have walked into the washroom while she’s been inside, so she now asks Pushie to either come in with her or stand guard outside.

Breau showed The Tyee a bathroom on the third floor with a broken lock, and another that can be easily opened by applying a bit of extra force with a hip or a shoulder. Her room is also missing a smoke detector, which she said she had also reported to the building manager.

Tioluwani said Breau and Pushie are “prolific hoarders,” and that other landlords would likely not be able to house them, but APMI is committed to keeping the couple in the building.

Breau acknowledged she and Pushie had a serious hoarding problem but said they’re trying to keep their room in better shape now. They’re also dealing with an ongoing cockroach infestation.

The Flint Hotel is owned by Peter Plett, who also owns the Colonial Hotel, a single-room occupancy hotel at 122 Water St.

Both buildings are managed by Atira Property Management Inc., a subsidiary of Atira Women’s Resources Society. AWRS is a non-profit organization that is committed to ending violence against women.

BC Housing provides an annual $1.2 million operating subsidy to Atira Women’s Resources Society for the Flint Hotel, which includes building remediation. The agency told The Tyee that tenants who are having problems can complain to BC Housing by emailing complaintresolution@bchousing.org.

“Atira has told us that as recently as summer 2021, Atira engaged in extensive repairs to the Flint Hotel that included work on washrooms, ceiling tiles and plumbing. A sprinkler activation in September has also necessitated restoration work currently underway on some areas of flooring, hallways and walls,” Henry Glazebrook, a BC Housing communications staffer, wrote to The Tyee in an email.

A previous Tyee story highlighted problems at the APMI-run Colonial, where tenants complained of unsafe drinking water, poorly maintained rooms and a severe rat infestation that made some tenants very sick. The Tyee has also reported on workplace safety concerns at APMI-run SROs.

Fiona York, an advocate who has supported tent city residents at encampments at three Downtown Eastside parks, said the Flint has the reputation of being one of the worst SRO buildings in the city. While most SROs are located in the Downtown Eastside or in other parts of downtown Vancouver, the Flint is located on Powell Street and McLean Drive in an industrial area of East Vancouver.

The heritage building, painted cream with bay windows, looks nice from the outside. Inside, however, large wet spots dot the ceiling tiles, the walls and bathrooms are painted black, and floors and walls are heavily damaged.

The City of Vancouver’s standards of maintenance database currently lists 45 issues with the Flint, the second-highest number for any building in the database. Only the St. Helen’s Hotel at 1161 Granville St. has more issues, with 54 problems identified. St. Helen’s is an SRO that is owned by the province and operated by APMI. 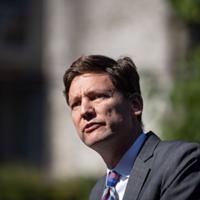 The Flint Hotel was one of the housing options that was repeatedly offered to residents of the Strathcona Park encampment, a large tent city of between 200 and 400 residents that existed from June 2020 to April 2021.

“It’s like a revolving door,” York said. “People going and coming from being evicted, or leaving or saying they just can’t stay there.”

York said she’s also heard about safety concerns from women who live in the building. She said the Flint should not be offered by BC Housing as an alternative to living in a tent in a city park.

“If they are actively placing people in the building, it means they consider it an acceptable, habitable place. And so, the question is, why is that okay?”

BC Housing says it will continue to offer vacant rooms that come up at the Flint to people who are on their waitlist, “including people sheltering outside who have registered for housing.”