After a year standing in-between the logging industry and some of the province’s last intact old-growth forest, the Fairy Creek blockaders are celebrating a victory.

On Tuesday the Supreme Court of B.C. ruled the logging company Teal-Jones would not be allowed to extend its injunction, which expired at 4 p.m.

Land defenders say there’s still a lot of work to be done before the province’s remaining 2.7 per cent of the most ecologically rich and productive old-growth forests is protected, but that the ruling could reduce RCMP violence on the frontlines.

Pacheedaht Elder Bill Jones, who has welcomed blockades on his territory since last August, said he’s “elated” by the news.

“This is a gift to all of us. Our values actually won for a change,” Jones told The Tyee. “We have expressed our wishes, wants and needs to save the old-growth forest, and we’re all so happy.”

The ruling is precedent-setting, said Matthew Nefstead, one of the lawyers for the Rainforest Flying Squad.

“I think it's the best statement we have so far of the ways in which the public interest should be considered in determining whether to grant an injunction like this or not.”

Police have arrested more than 1,100 people in connection with the Fairy Creek protests and 101 have been charged with criminal contempt.

In his ruling, Judge Douglas Thompson said “methods of enforcement of the court's order have led to serious and substantial infringement of civil liberties, including impairment of the freedom of the press to a marked degree."

Thompson said the RCMP do not require the powers granted to them via the injunction, even though protesters continue to use civil disobedience at Fairy Creek. That means police will only be able to use the Criminal Code to arrest protesters going forward.

While it’s still “an open question” what RCMP enforcement will look like without an injunction, Nefstead says it’s clear that the force’s power will be substantially more limited. “If they have to consider in each individual case, ‘What offenses is this person committing? And do we have enough evidence to convict them?’ then that becomes a different situation,” Nefstead said.

Injunctions are often a go-to by companies seeking redress for civil disobedience against them, Nefstead said, and this ruling is unique for failing to grant that enforcement. “It's very rare for an injunction sought by a resource company with lawful extraction rights to be refused,” he added.

Neftstead sees the ruling as an important check on those broad injunction powers. “That can only be good for the ability of people to express themselves and to participate in public protest,” he said.

Kathleen Code, a spokesperson for the Rainforest Flying Squad, says there will likely be fewer officers on the frontlines as specialized units move out and local RCMP officers take over policing the area. That should reduce violence at the blockades, she said.

“All of the violence came from the RCMP trying to enforce their version of the injunction. The violence never came from us,” she said. “The worst things we do are sing, dance, play drums and hold tight to one another.”

RCMP actions at Fairy Creek were central to the judge’s decision to deny the extension, Nefstead said.

“He seems to be concerned that extending the injunction, and having the public see the court as endorsing what the police have been doing at Fairy Creek, would interfere with the court’s reputation as an impartial institution,” he added.

That includes the use of expansive exclusion zones that blocked media and public access to the blockades. In August, Judge Thompson ruled that the RCMP’s use of those exclusion zones were unlawful. By breaching their responsibilities to uphold the freedom of movement, he found the RCMP had erred in their enforcement.

The judge also highlighted the fact that RCMP officers were ordered to hide their identity while at the blockades. “We identify ourselves. Accountability requires it,” Thompson said in his ruling. Thompson also referred to the RCMP’s use of the thin blue line patch on their uniforms — viewed by some as a symbol of racist and violent police practice — adding that the RCMP says its officers should not wear this symbol.

Nefstead believes violence against protesters is more systematic than what the judge acknowledged, but that “it's still useful that he points to the destructive effect that a few problematic cases have on public perception of the rule of law,” he said.

The RCMP and Teal-Jones did not respond to The Tyee’s request for comment by publication time.

In court, the Rainforest Flying Squad argued the injunction should not be extended because old-growth trees should be protected to defend against the climate crisis. Judge Thompson said he wouldn’t weigh in on this issue because it’s outside the scope of the court case.

Shawna Knight, a longstanding member of the Rainforest Flying Squad, was disappointed by that omission.

“[Today’s ruling] is not because of the crisis that we're in. It's not because of old-growth ecosystems that need to be protected,” she said. “It's because the cops are making the court look bad.

“We feel a bit validated, but also the reasons the judge cites that he's not extending the injunction are not super encouraging.”

So what does this all mean for the Fairy Creek blockades? Elder Bill Jones says he won’t be letting his guard down. 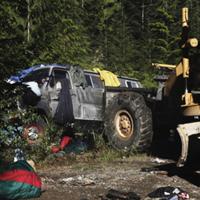 ‘Someone Is Going to Be Seriously Injured or Killed’

“The war is not over,” Jones said. The B.C. government has not yet followed through on its promises to protect old growth, he says. “In fact they’ve issued lies saying they’ve stopped logging, while we can see trucks going by loaded with the trees we’re trying to protect, like cedar trees.”

Code echoed his statement, saying the blockaders aren’t going anywhere and will continue to peacefully protect the trees.

“Everybody I’ve talked to is celebrating the RCMP leaving,” says Rainbow Eyes, a First Nations land defender and member of the Da’naxda’xw-Awaetlala First Nation near Knight Inlet on Vancouver Island. “We were there on Elder Bill Jones’ invitation, the RCMP were there because of the Crown and industry. It’s a big celebration because the colonizers are leaving the land.”

Knight said their movement has just started. She recently travelled to Wet’suwet’en territory with a group of Fairy Creek blockaders to teach activists there how to use similar hard block techniques in their resistance to the Coastal GasLink pipeline.

“Honestly, this is just the beginning,” she said.

Shy-Anne Gunville, an Afro-Indigenous land defender and member of the Little Red River Cree Nation, has been living at the blockades full time for the past four months. Gunville says she’s been arrested six times, and that for the last month and a half the frontlines have been “really intense, really violent and brutal.”

But Tuesday’s announcement has her dancing around in celebration.

“It’s alleviated a lot of my anxiety,” she said. “This is a victory for all land defenders and all of those who supported us, either on the frontlines, in camp or from afar by sending donations and money. It’s all of our efforts paying off and allowing us to celebrate.”