Council heard that it has been two years since the Sahota family were ordered to fix a second exit from the top floor at the Regal Hotel at 1046 Granville St. because of fire safety concerns.

But the work is still not completed.

The request for council to approve the injunction was initially scheduled for July 20, but it was delayed because Evan Cooke, the lawyer for the Sahotas, was not able to attend that council meeting.

At Wednesday’s council meeting, Cooke said the injunction wasn’t needed because work is almost completed and the remaining repairs are “minor,” such as a requirement to paint yellow markings on some stairs.

In 2019, city building inspectors also identified another serious issue. Part of the floor on the second floor was rotten because of water damage.

Cooke told council the work to repair that water damage is now “effectively done,” and a structural engineer has signed a letter of assurance.

Both issues are “directly related to the life safety of the building occupants,” Schwebs told council.

Pal and Gurdyal Sahota are elderly siblings who own a large portfolio of rental buildings in Metro Vancouver, including three SRO hotels. Their sister Parkash, previously a co-owner, died in 2019.

SROs are common throughout downtown Vancouver. Most are over a century old and feature small rooms with no kitchens and shared bathrooms. They house many of Vancouver’s poorest, most vulnerable and hardest to house people.

City councillors reminded Cooke that the Sahotas have a long history of failing to do required maintenance on their buildings.

Coun. Sarah Kirby-Yung asked Cooke why it took five months — from June 27, 2019 to Nov. 26, 2019 — for the Regal’s owners to get a building permit after the city’s chief building official ordered the owners to repair the structural damage to the floor. That order included a requirement for the work to be completed in 30 days.

Cooke said he was not representing the Sahotas in June 2019, but he said at that time family was dealing with the illness of Parkash Sahota, who died that year at 83.

They were also involved in negotiating with the City of Vancouver to settle an attempted expropriation of the Regent and Balmoral hotels, which for years had been considered the city’s two worst SRO buildings.

Cooke said the Sahotas had also had difficulty finding contractors to do the work during the COVID-19 pandemic.

“The nature of this building and its occupants has made it a difficult work environment,” Cooke said. “And also that some of the structural work that has been done has opened up walls, has opened up floors and revealed complex and ancient services — water, electrical and so forth — that has required some creative work.”

In 2017, the city closed the Sahota-owned Balmoral Hotel because it was in extreme disrepair. Before tenants were moved out of the building, a structural engineer hired by the city warned that if bathtubs in the building were filled, there was a risk they could fall through the rotten floors, causing a “localized collapse” with potentially severe consequences.

In correspondence with city staff, Patrick Ryan, the city’s chief building official, told city staff they “were lucky no collapse occurred” when a previous structural issue with the Balmoral’s basement had been discovered in 2016.

A year later, the city also closed the Regent and started an unprecedented attempt to expropriate the two buildings because of their extreme neglect. 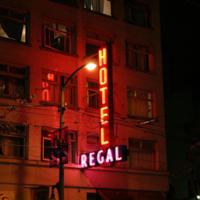 Sahotas in Hot Water with City over Regal Hotel

In 2020, the city settled with the Sahotas and ownership was transferred to the city. A source with knowledge of the transaction told The Tyee the city paid the Sahotas $11.5 million for the two buildings, which at the time had been assessed at a total of $6.7 million.

The Sahotas still own three other SRO buildings: the Cobalt at 917 Main St., the Astoria Hotel at 769 East Hastings St., and the Regal Hotel.

Senior city staff have said the city does not intend to try to expropriate other residential buildings.

In 2018, the city ordered the Cobalt Cabaret, a bar that operated on the ground floor of the Cobalt SRO, to close after inspectors found the floor was held up with temporary shoring and it was no longer safe to allow the bar to operate.

Cooke assured councillors that the work on the Regal Hotel would be done within two to four weeks — which, he said, is less time than it will take for the city to get the injunction.