A single-room occupancy hotel in downtown Vancouver still has no second exit two years after city building inspectors ordered the owner to fix the problem.

And part of the floor of the Regal Hotel at 1046 Granville St. has also rotted, creating structural damage, according to a city staff report that will come to council on Wednesday.

City staff want council to approve recommendations to seek an injunction to force the owners to fix the safety problems in the building, and to approve putting a notice on the land title to inform any potential buyer about the building bylaw violations and its unsafe condition.

The 82-unit Regal is owned by Gurdyal and Pal Sahota, elderly brothers who are notorious for repeatedly failing to comply with orders from the city to repair their buildings. The Sahotas have been taken to court numerous times by the city, and in 2019 they paid a $150,000 fine and made two donations to Downtown Eastside charities in a settlement with the city.

In 2017 and 2018, the city closed the Sahota’s Balmoral and Regent hotels in the Downtown Eastside because of serious disrepair and worked with BC Housing to relocate the tenants. 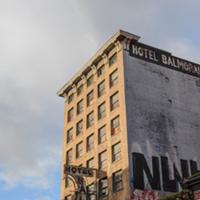 In 2019, Vancouver city council voted to expropriate the two buildings, the first time the city had ever taken action to seize residential properties because of extreme disrepair.

In 2020, the city paid the Sahotas $11.5 million to settle the expropriation and take ownership of the two buildings, which it plans to redevelop into housing for low-income people.

In addition to the Regal Hotel, the Sahotas still own the Cobalt and the Astoria hotels, in addition to other rental apartment buildings.

According to the staff report about the Regal Hotel, in May 2018 a city building inspector observed there was only one working exit out of the building. The city’s building bylaw requires there to be at least two ways that residents can exit a building in case of fire or other emergency, and if there aren’t two working exits, the building is considered to be unsafe.

In June 2019, a building inspector noticed structural damage to the floor of the second storey of the building, apparently caused by “long term exposure to water.” The danger this poses to residents “could worsen if the repairs are not completed in a timely manner,” according to the staff report.

Although the building owner applied for and was granted building permits to fix both problems, the work is still not done, according to city staff.