Vancouver paid the former owners of the notorious Regent and Balmoral hotels $11.5 million for the properties, according to a source with knowledge of the transaction.

The city has refused to release the cost of the deal, saying it had agreed to the Sahota family’s demand for secrecy in order to speed up the sale process.

The two East Hastings properties are assessed at a total of $6.7 million.

The sale ended years of wrangling over the two Downtown Eastside single-room occupancy hotels. After years of city bylaw violations and tenant complaints, the city had condemned the Balmoral in 2017 and the Regent in 2018.

The city then took the extraordinary step of trying to expropriate the buildings because of the severe neglect, valuing the properties at just $1 each because of how much it would cost to redevelop the sites for social housing.

The Sahota family, which owns the the Regent and the Balmoral and other SROs in Vancouver, challenged the expropriation in court. Court proceedings were halted this fall as the city and the Sahotas negotiated a purchase agreement for the buildings.

On Dec. 4, The Tyee broke the news that ownership of the buildings had been transferred to the City of Vancouver.

But the city said it could not reveal the purchase price because the Sahotas had insisted on confidentiality. On Dec. 11, the Globe and Mail reported the city had paid over $7.5 million — an amount city staff had estimated two years ago as the cost of expropriating the two hotels.

A city councillor The Tyee contacted for this story would neither confirm nor deny the $11.5 million figure, but said city council would have preferred to release the price to the public.

The deal was approved in an in-camera city council meeting. In a memo to councillors, city staff said the sale eliminated the risk that the expropriation attempt would fail. It also means that the city and province can now move forward to develop the properties into better housing for low-income people.

Wendy Pedersen, an advocate for tenants who live in SROs, said she would have liked to have seen the city go to court and set a precedent by successfully expropriating the Regent and Balmoral.

But ultimately, Pedersen is happy to see the city buy the buildings. She worried that revealing the price would push up the price for other SROs in the city — especially because council recently passed an ambitious plan to buy over 100 SROs.

“The landlords have put so little into these buildings, and taken away so much from the community — in my opinion they don’t deserve very much,” Pedersen said.

But for some Downtown Eastside residents, the secrecy was galling.

“I think it’s important to know, because many people feel the owners of the Balmoral and Regent failed the people,” Gunargie O’Sullivan told The Tyee.

The owners repeatedly ignored city bylaws and provincial rent laws. While the Sahotas were taken to court many times and paid hundreds of thousands of dollars in penalties, conditions never really improved for tenants.

“They should have been held accountable for failing the tenants in those ways,” O’Sullivan said.

Jack Gates, a former tenant of the Regent, spoke about the terrible conditions in the hotel, including having no heat or hot water, no electricity, toilets that didn’t work, and seeing other tenants dragged out of rooms they’d paid for. Rats would scamper down the halls in broad daylight.

Gates said he feels the Sahotas shouldn’t even have been given the $1 the city said each of the properties was worth.

“I am disappointed they didn’t just come out in the open and just tell everyone how much they paid,” he said.

The Tyee has reached out to the Sahotas' lawyers for comment.

The value of the Regent and Balmoral had fluctuated wildly before and after the city condemned the buildings and started the expropriation attempt. 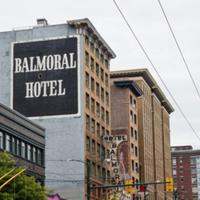 Vancouver Takes Over the Notorious Regent and Balmoral SROs

On June 28, 2018, the city offered to buy five Sahota-owned SRO buildings for just their land value (the Sahotas also own the Astoria, the Cobalt and the Hotel Regal on Granville Street). On July 6, the city offered $6 million for both the Regent and the Balmoral. The Sahotas rejected both offers saying they were not “fair market value,” according to court documents.

The Sahotas also said they had been approached by several interested buyers in the summer of 2018, with offers ranging from $14 million for just the Balmoral to $25 million for both properties from the Laudisio family, who own several SROs in the Downtown Eastside.

The city moved to begin the expropriation process on July 30, 2018.