The British Columbia government is following through on commitments to raise the general minimum wage and to eliminate the lower rate for people who serve liquor, but says it needs more time to look at how farm workers are paid.

Reports the government commissioned after coming to office in 2017, including two 2018 Fair Wages Commission reports and one 2019 Piece Rate Study, found that in many cases farm workers who receive piece rates — pay based, for example, on how much fruit they harvest — earn less than the province’s minimum wage.

“We have been taking an in-depth look at how to ensure compensation for farm workers is fair for workers, sustainable for farm operators and economically viable for the industry,” Labour Minister Harry Bains said in an emailed statement.

The government’s priority over the past year has been to try to keep people safe during the COVID-19 pandemic, Bains said.

The province will also finish phasing out the lower wage for liquor servers, which critics have called sexist since it is mainly paid to women. Under the policy, critiqued in The Tyee’s Slaves to Tips series, servers could legally be paid $1.25 less an hour than other workers.

Both of those moves follow through on commitments the government made three years ago in response to recommendations from the government-appointed Fair Wages Commission.

At that time, Bains also announced an initial increase to the piece rate amounts paid to farm workers but said the government would need another six months for further study before mandating any more increases. On that timeline, the work would have been completed in the fall of 2018.

His ministry commissioned a further report and received the 82-page Piece Rate Study: Exploring the Economic Impact of the Piece Rate System in British Columbia on Jan. 10, 2019.

That report found that piece rates are useful as an incentive to increase productivity and attract workers but that they left many workers below the provincial minimum. “The lowest-paid sector was blueberries, where harvest workers were making less than minimum wage in all cases,” it said.

There was a serious shortage of farm labour, it noted, but farm owners said they had little room to pay more to attract workers. Depending on the product, profit margins were tight, and owners had options for saving costs on local labour.

“Growers plan to increase mechanization, hire more temporary foreign workers through the Seasonal Agricultural Worker Program, and employ fewer local workers if labour costs continue to increase or if minimum wage is used as a floor,” it said.

Under the SAWP and Temporary Foreign Worker Program, the federal government requires employers to pay participants at least the provincial minimum wage. It would be cheaper for farms to employ temporary foreign workers at minimum wage than it would be to pay local workers the minimum plus a piece rate.

The report did not make firm recommendations about how to proceed. Instead, it deemed the issue complicated and suggested that changes should be made carefully.

The president of the BC Federation of Labour, Laird Cronk, said the government has been on the right track with minimum wage increases, though there is still work to be done.

It’s good for both workers and employers that the four increases to the minimum wage since 2017 have been predictable, he said, and eliminating the server wage was incredibly important.

“There shouldn’t be exceptions or exemptions for certain workers on the minimum standard, so I think that was an extremely valuable piece to finally eliminate what never should have been there, the server wage,” he said.

“It should be fair for everyone,” he said. “Farm workers are often workers of colour, they’re often women, disproportionate to the overall work force, so I would say that the piece rate does disproportionately discriminate against those groups of workers.”

The Fair Wages Commission had recommended in its second report, dated March 12, 2018, that the “minimum wage should be a floor and piece rates should be available as an incentive.”

Cronk said the government should act on the commission’s recommendation. “There’s no reason not to live up to that recommendation. It’s disappointing they have not done that.”

Cronk also said the government should appoint a permanent Fair Wages Commission that could do research into future minimum wage increases, how to make that minimum a living wage, and how to use piece rates as an incentive.

“I don’t believe they’ve instituted or are in the process of instituting a permanent fair wage commission to do that valuable work,” he said. “We continue to urge the government to do that. I think that’s a missing link that’s important.”

The BC Liberal Party froze the minimum wage from 2001 to 2011 during its 16-year tenure. The Liberals also introduced the server wage in 2011.

Interim leader of the BC Liberal Party Shirley Bond said the increases scheduled for June 1 are coming at a time when restaurants and other businesses are already struggling to get through the pandemic.

“If you’re going to raise the minimum wage, that doesn’t actually help you if you don’t have a job to go to,” she said. “I think it’s an important thing to look at in terms of timing. Can restaurants afford to do that? We also know employees need to pay [for] their families’ [needs], so it’s a balancing act for sure.” 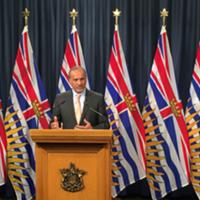 ‘Sexist’ Server Wage to Be Abolished Within Three Years

Cronk said the 60-cents-an-hour raise for people receiving the minimum wage is small compared to the increase in the cost of food, transit and other necessities.

“I struggle from the the pushback that I’m expecting and starting to hear,” he said. “You need to respect the human machinery that does the work that makes you the money that’s struggling out there at the absolute minimum payment.”

The government is right to continue with minimum wage increases despite the challenges of the COVID-19 pandemic, he said.

“I think they’ve recognized these workers have been undervalued for an awfully long time and we found out their value during the pandemic,” he said. “Sixty cents is the least we can do for these critical workers.”

The government should also act now to make sure farm workers are paid at least the minimum, he said.