As tensions were building on Wet’suwet’en territory early this year Premier John Horgan’s office quietly cancelled plans to visit Smithers, home to the Office of the Wet’suwet’en.

Along the way, the premier had planned to tour the LNG Canada site in Kitimat, take in hockey games in Fort St. James, judge pies in Fraser Lake and visit forestry operations near Quesnel.

But the schedule did not include a meeting with Wet’suwet’en Hereditary Chiefs who called for government-to-government talks with the premier on the growing threat of conflict over the Coastal GasLink pipeline project on their territory. Their office was in Smithers, about 100 kilometres north of the standoff between the Wet’suwet’en, the RCMP and the pipeline company on the Morice West Forest Service Road.

Drafts of the premier’s itinerary circulated in government in late November and December 2019 show the plan was to drive between the northern communities, including an overnight stop in Smithers.

That appears to contradict the premier’s statements when he declined to meet with the Chiefs.

“The Wet’suwet’en and Smithers was never part of the tour,” Horgan told media. “To suggest I and my government have been unavailable is not the case.”

But the FOI documents show the premier was briefed on the original itinerary, including the Smithers visit, according to a Nov. 28, 2019 internal email by Horgan’s director of executive operations and scheduling.

“I have reviewed the rough plan with [the] Premier yesterday and he has approved — very minimal flights required for this tour, as most will be driving from one location to the next,” the email said.

As late as Dec. 16, 2019, the draft itinerary shows the premier travelling from Terrace to Smithers on Jan. 17, 2020 and overnighting before continuing to Fraser Lake the next day. In emails sent Dec. 18 and 19, staffers refer to Horgan’s “January road trip up North” and warn a photographer joining the tour that there will be “lots of driving!”

The next time Horgan’s itinerary is discussed is Jan. 8, when the premier is shown flying between Terrace and Prince George on Jan. 17, skipping the Smithers stop.

That was one day after Wet’suwet’en Hereditary Chiefs held a news conference and called for government-to-government talks.

The revelations came in nearly 900 pages of internal communications obtained by The Tyee through a freedom of information request. The request took nearly 11 months to complete and was only received after a complaint about delays was filed with the Office of the Information and Privacy Commissioner.

It’s unclear exactly when or why Smithers was cut from the tour, but it came as tensions between the Wet’suwet’en Hereditary Chiefs and the province increased.

On Dec. 31, 2019, the BC Supreme Court granted Coastal GasLink a permanent injunction barring any interference with its access to the pipeline route in Wet’suwet’en territory. On Jan. 4, 2020, Wet’suwet’en Hereditary Chiefs responded by closing the Morice West Forest Service Road used to access the pipeline route and evicting pipeline workers from the area.

On Jan. 7, 2020, the anniversary of a police action on the Morice a year earlier that saw 14 people arrested, the Chiefs publicly reiterated their opposition to the pipeline and called for a government-to-government meeting with the premier.

On Jan. 16, an internal email informed staff at the premier’s office about the invitation from Hereditary Chiefs. 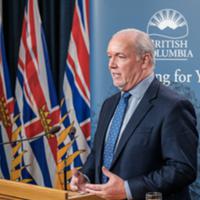 “Although the letter is dated the 10th, this is the first we have seen of it. I will log it for scheduling right away,” said an email from a provincial correspondence co-ordinator to the premier’s staff.

That meeting never took place. Instead, deputy communications director Jen Holmwood told media the government had reached out to schedule a phone call with the Chiefs. Scott Fraser, at that time minister of Indigenous relations and reconciliation, flew to Smithers Jan. 22 for a meeting at the Office of the Wet’suwet’en.

Those efforts failed to defuse the conflict. In early February, RCMP moved to clear barricades along the Morice forestry road for the second time in just over a year. Twenty-eight people were arrested at four camps along the remote resource road between Feb. 6 and 10.

The RCMP has spent more than $13 million policing the Morice forestry road since early 2019.