Members of the Wet’suwet’en Nation are calling on B.C.’s public health officer to shut down work camps operating on their territory as COVID-19 numbers rise in northern B.C.

In an open letter to Dr. Bonnie Henry signed by 22 Ts’ako ze’, or female chiefs, the women express “grave concern” over continued construction of the Coastal GasLink natural gas pipeline through the region.

Critical infrastructure, including oil and gas projects and construction work, has been declared an essential service during the pandemic.

But the camps, which house workers from outside the region near remote communities, have been a concern since COVID-19 struck in B.C.

Molly Wickham, Sleydo’, is spokesperson for Gidimt’en camp, an Indigenous occupation on the road to Unist’ot’en Healing Centre. Land defenders were arrested at the camp while blocking access to the pipeline route in 2019 and again earlier this year.

She says that at least two people recently tested positive for COVID-19 at Coastal GasLink’s 9A Lodge camp near the healing centre. Both were sent to their home communities on Wet’suwet’en territory but have since been hospitalized. Six others are in isolation because of contact with infected workers, she said.

Wickham adds there are rumours of cases at the two other camps: Huckleberry Lodge south of Houston and 7 Mile Lodge in Burns Lake.

“Everybody’s really concerned,” she said. “We heard from other community members that people were sent home [with COVID-19] from the Huckleberry man camp, which is on Gidimt’en territory.”

The 670-kilometre pipeline project would carry fracked gas from Groundbirch in the province’s northeast to the LNG Canada processing plant under construction in Kitimat.

Northern Health Authority declared an outbreak at the LNG Canada site on Nov. 19. As of today, 52 employees associated with the outbreak have tested positive. Two people are in self-isolation at the project site and remaining individuals are in isolation in their home communities.*

Roughly a quarter of the pipeline travels through the 22,000-square-kilometre Wet’suwet’en territory, passing close to the Unist’ot’en Healing Centre and other remote dwellings such as Wickham’s home and Gidimt’en camp.

“They come very close to us. Their job is to be intimidating so any interactions that we have with them, they walk right up to us,” she said, describing incidents where security workers came within an arm’s length of her and refused to back up.

“They don’t respect any of the rules.... They’re not wearing masks when they’re driving around with one another or when they’re interacting with us,” she says. “Same with the RCMP, who are also coming from different provinces. They’ll just come right up to your vehicle, right up to the window, and you always have to ask them to stand back.”

In March the province wrestled with the justification for designating construction of major infrastructure projects essential services, according to files obtained by the CBC.

At the time Henry said most industrial work camp sites had “gone to a very reduced staff.” In late March Coastal GasLink reported that its workforce had been scaled back to about 400 workers. In its most recent update, the company reported more than 4,000 workers in the field.

At the same time northern B.C. has seen a significant increase in new COVID-19 cases, growing from about a half-dozen a day a few weeks ago to an average 28 new cases per day over the past week. More than a third of the northwest’s 157 cases were logged between Nov. 13 and 26.

Indigenous communities — which are often remote, have limited health services and risk losing cultural records if Elders die from the disease — are particularly vulnerable to the effects of COVID-19.

Last week, the Heiltsuk Nation and Nuu-chah-nulth Tribal Council renewed calls on the province to release details of COVID-19 infections near their communities.

“As one of our communities is in the midst of an outbreak, this information becomes even more critical to Nuu-chah-nulth,” Judith Sayers, president of the Nuu-chah-nulth Tribal Council, said in a statement last week. “We call on Premier Horgan to ensure his new ministers’ mandate letters include a strong commitment to sharing information and saving Indigenous lives.”

The letter from the Wet’suwet’en Ts’ako ze’ expresses concern about how a COVID-19 outbreak could affect Indigenous culture. 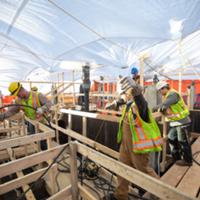 “Similar to other Indigenous Nations, our communities are already suffering the loss of our language speakers and cultural knowledge-keepers. Due to colonization, we now have less than 2.9 per cent of language speakers left, who have an average age of 71,” it says.

Wickham says the women thought they might appeal directly to Henry, who has supported Indigenous communities’ right to protect themselves against COVID-19.

“I think Bonnie Henry is probably the most reasonable person in that position,” Wickham says. “Ultimately, I think it’s up to her to decide.”

The Tyee requested comment from B.C.’s Ministry of Health and Coastal GasLink but did not receive a response by press time.

* Story updated on Dec. 1 at 4:11 p.m. to include updated case count information from a news release.